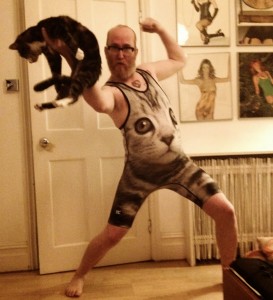 www.thehorsehospital.com Colonnade, Bloomsbury, London, WC1N 1JD< Lions + Tigers + Bears is the title of the exhibition and a limited 7 inch single by Nick Abrahams. The exhibition is at the Horse Hospital opens Friday 27th June and closing on Saturday 19th July. During the exhibition there will be related screenings, talks, live music. Nick Abrahams has exhibited internationally, noticeably with his 2 feature length collaborations with Jeremy Deller (‘Our Hobby is Depeche Mode’ and ‘The Bruce Lacey Experience’). Last year Nick made ‘Ekki Mukk’, a short film which forms part of ‘Lions and Tigers and Bears’. The title ‘Lions and Tigers and Bears’ refers to the fear of the forest that Dorothy feels in ‘the Wizard of Oz’, as well as a way our imagination plays an active part in our relationship to nature. ‘Ekki Mukk’ won the British Council Best UK short film award last year, and the exhibition develops and extends some themes which first appeared in this film. The single and exhibition include 3 key audio recordings – that of a snail eating, a fox sleeping, and sounds recorded around a tree. The sounds evoke mysterious worlds – the tree is the Martyrs tree in Tolpuddle, under whose branches the first trade union in England met in 1834, to fight for better pay and working conditions… the snail is heard eating, amplified to a level which we can hear and sounding something like a chainsaw – what else would we hear if we could listen closely enough ? And a sleeping fox…. what does a fox dream about ? A fourth recording features the voice of Shirley Collins, a living national treasure and seminal folk singer, who reads a prose poem by Nick Abrahams, and leaving us in the world of fairytales. The exhibition bears witness to nature and to our changing relationship with it, as the viewer brings their own imagination to bear on sounds and images which are both extraordinary and overlooked. The single and exhibition are part of an ongoing art and film project, which are to be developed further by Nick Abrahams in a future planned feature film. ‘Nick Abrahams pays tribute to his musical collaborator, the humble snail, in this gently mock-heroic portrait (his new exhibition is accompanied by a seven-inch single which samples the sound of a snail eating). It places him in a long tradition of eccentric English Romanticism, finding objects of wonder in overlooked, everyday corners.” The Guardian, 31 May 2014

David Gryn, Artprojx has screened Nick Abrahams film Ekki Mukk at Art Basel in Miami Beach in 2012, curated it for the Artprojx Cinema MOCAtv programme, screened it in Vladivostok, joined Nick on stage at the ICA for a Nick Abrahams film evening in 2013 and premiered ‘Our Hobby is Depeche Mode’ at the Prince Charles Cinema in 2009.