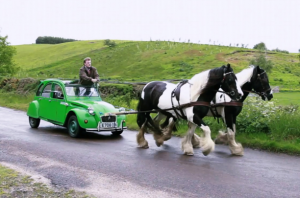 Deux Chevaux is a performance by William Mackrell consisting of two horses pulling a two-horse power car (Citroen 2CV) through the Royal Borough of Kensington & Chelsea and Westminster, stopping at nine local cultural landmarks on the 21st June 2014. The work challenges the interaction of human and mechanical power, questioning language’s ability to measure their differences and similarities and asks what happens to this action when confronted with the unexpected in the everyday.

This is the first time Deux Chevaux is being presented as a public performance. The project’s visual impact aims to instantly engage with a wide audience in major public spaces, presenting the absurdity of the task as both poetic spectacle and serious critique. The event will follow a planned route (please see the performance timetable below) travelling through the ‘Albertopolis’ to the museums and cultural centres in the local area.

‘Albertopolis’ is the unique cultural estate that spans over 87 acres of land in South Kensington. The name came into being, following the Great Exhibition of 1851 held at the Crystal Palace in Hyde Park. Organised by Prince Albert, the Great Exhibition successfully raised the necessary funds to buy the surrounding land and establish the museums, cultural and scientific centres that continue to define the district today. Deux Chevaux aims to engage with this historical context, operating on the crossover between art, nature and science as a site-specific intervention, which celebrates Prince Albert’s ambition to, ‘increase the means of industrial education and extend the influence of science and art upon productive industry’.

In comparison to traditional static sculptural artworks, this ‘moving sculpture’ has an ability to encompass much of the Borough as it travels from Hyde Park via the Natural History Museum, Royal Albert Hall, Institut Français, Royal British Society of Sculptors, Chelsea Theatre, Kings Road, Duke of York Square, and Andipa Gallery. At these sites the public is encouraged to interact with the project, and as the result, the piece becomes a community-oriented participatory work that will challenge the boundaries between the traditional genres of art such as performance and sculpture. 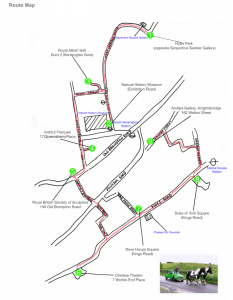 Schedule for the day

11.30am Project begins at Hyde Park (opposite Serpentine Sackler Gallery) (1) 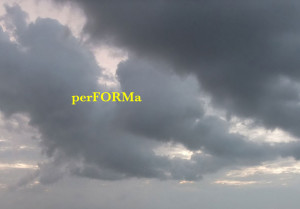 perFORMa: 1 Night of performance an Exhibition of objects a reaction to sculpture. 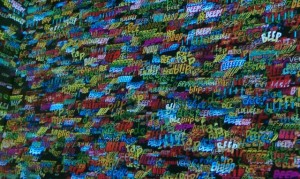 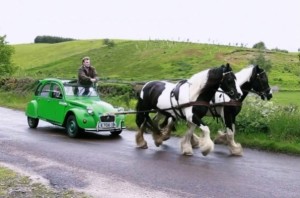 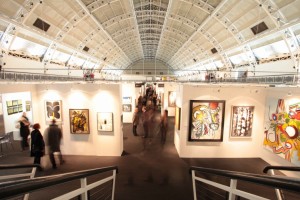