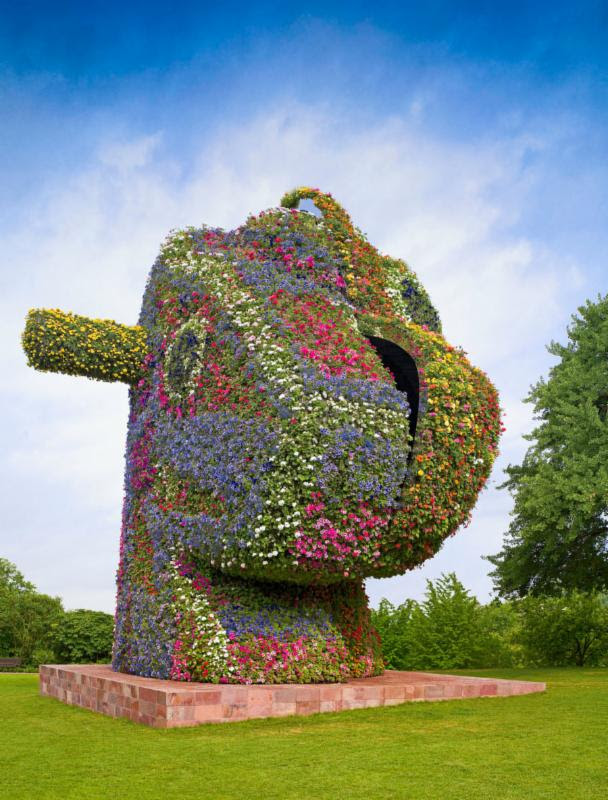 This summer, Jeff Koons’s Split-Rocker makes its New York City debut at Rockefeller Center, to coincide with the opening of his retrospective at the Whitney Museum of American Art. Presented by Gagosian Gallery and organized by Public Art Fund and Tishman Speyer, Split-Rocker is a spectacular planted form that towers over 37 feet high and features over 50,000 flowering plants. It was first exhibited at Palais des Papes, Avignon in 2000; and subsequently at Château de Versailles (2008) and Fondation Beyeler (2012). It is also in the collection of the Glenstone private museum in Potomac, Maryland, where it has been on view since June of 2013.

Consistent with Koons’s persistent fascination with dichotomy and the in-between, the inspiration for Split-Rocker came when he decided to split and combine two similar but different toy rockers, a pony belonging to his son and a dinosaur (“Dino”). The slippage or “split” between the different halves of the heads gives an almost Cubist aspect to the composition. As the model was enlarged to the scale of a small house, the split became an opening, a profile, and a light shaft. In contrast to his legendary Puppy of 1992, which was presented by Public Art Fund at Rockefeller Center in the summer of 2000, Split-Rocker suggests the idea of a fantasy shelter. Whereas the singular form of Puppy is closed and sculptural, the combined form of Split-Rocker is architectural and hollow.

Split-Rocker evokes a piece of classical topiary work, yet its technical construction is the result of a twentieth century invention, inspired by the small-scale floral sculptures found in certain vernacular festivals. The steel is hidden from sight other than where the disparate sides of the head join, while its vast surfaces are “painted” with many thousands of live flowering plants–begonias, geraniums, petunias, fuchsias, and many more. Its internal structure also supports an extensive irrigation system.

Jeff Koons comments, “I love the dialogue with nature in creating a piece that needs so much control–How many plants should be planted? How will these plants survive?–while at the same time giving up the control. It’s in nature’s hands, even though you try to plan everything to make the plants survive. This sense of giving up control is very beautiful. The balance between control and giving up control reminds us of the polarity of existence.”

Split-Rocker will be on view at Rockefeller Center June 25th-September 12th, 2014.

“Jeff Koons: A Retrospective” opens to the public at the Whitney Museum on June 27th and runs until October 19th, 2014. whitney.org