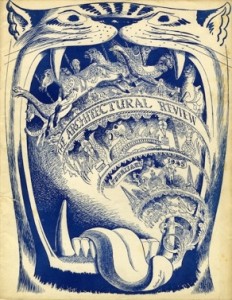 Hastings became joint director of the magazine in 1925 and fulfilled various supervisory roles until his retirement in 1973. The 50 years of Hastings’ career in architectural journalism were the years during which the modern movement rose in Britain and, according to many accounts, also began to fall.

Like many of his architect contemporaries, Hastings felt that English architecture had lost its way after the Regency period, and that the modern movement emerging in Europe in the 1920s showed potential to recover a closer relationship between art and life. Under Hastings’ direction, The Architectural Review advocated greater sensitivity to the psychological needs of the individual and society; a renewed faith in the spirit of the amateur; appreciation for the accidental features of towns; and an idea of progress in which new development would be woven into historical urban fabric.

Townscape became the overall term for transforming these ideas into a recognisable way of seeing and acting. It was a word that Hastings claimed (erroneously) to have invented, although he was effective in giving it a new definition and popularising it. Under this heading, using a number of collaborators, he developed the potential of applying Picturesque theory to the problems of post-war cities as a corrective to current orthodoxy, and it is with this long-running project that he is chiefly associated. Though Hastings’ approach was criticised for a lack of systematic thinking and disengagement from social reality, townscape did gain a new relevance in the 1960s following the rise of public interest in architectural conservation, leading to the publication of The Italian Townscape as a special issue of The Architectural Review in June 1962 and in book form the following year.

The tension between conservatism and progress marked all Hastings’ thinking and enterprises, from his influence on The Architectural Review and the staff that he hired to the paradoxical creation of a neo-Victorian pub as a setting for the leaders of modernism. Under his direction, The Architectural Review maintained a lively dialogue between past and present. Like many of his contemporaries, Hastings saw architecture as one element in a range of reforming activities, spanning from domestic furnishing and equipment to the planning of cities and regions, and this variety was reflected in the magazine’s content and design.

The Architectural Review: a Cover Story will feature rare back issues of the journal and other related ephemera on loan from personal collections. The exhibition material has been selected and annotated by writer and researcher Alan Powers, who together with Erdem Erten authored the introduction to Artifice Books on Architecture’s recent reprint of The Italian Townscape, Hastings’ 1963 publication under the pseudonym Ivor de Wolfe.