Based on the subject of physicality and topicality within the delirious metropolis, Toru Ishii’s first solo exhibition in the UK aims to achieve a hybrid of expression in elements such as the past and present and the digital and analogue. He challenges how traditional art can exist in this modern age, and attempts to find a new paradigm of art by employing long-established techniques. These works are in a two-part series, Salarymen and After-image.

The first of the two-part series is Salarymen, the office workers who are a common feature in our cities and characterise today’s capitalist society. The second part, After-image, is based on current events and the everyday incidents and accidents that surround us in a modern city in the era of information technology, and here Ishii recaptures images featured in the media that viewers have retained in their memory.

Ishii’s works also raise the question of the cognitive ambiguity of the visual imagery between reality and fiction in an information-saturated world, especially after the 2011 Great Tohoku Earthquake and Tsunami in Japan.

Ishii utilises the Itome Yuzen dyeing method to depict the iconography of modern society, extending the potential of this traditional art to reflect on modern subjects. Just like the Japanese print maker, Katsushika Hokusai, who portrayed the mundane customs of everyday life in Edo era, Ishii reflects on the current events and manifestation of society today, and adds an innovative value to the traditional technique of Itome Yuzen.

Toru Ishii was born in Shizuoka, Japan, and received his Ph.D. in Textile Arts in 2014 from the Tokyo University of the Arts. He has exhibited extensively both in solo and group shows in and outside Japan, including Metropolitan Moment (Mizuma Action, Tokyo), Toru Ishii (Tokyo Opera City Art Gallery), Edo Pop: The Graphic Impact of Japanese Prints (Japan Society Gallery, New York) and Look East! 2 (Mizuma Gallery, Singapore). He has been awarded an Asahi Shimbun Foundation Grant, a Doctoral Program Final Exhibition Nomura Art Prize, a Yoshino Gypsum Art Foundation Grant and the Mitsubishi Corporation Art Gate Program. 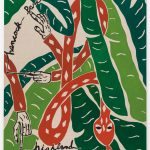