AESTHETICS ASIDE #2: The Artport, some criticisms - FAD Magazine
Skip to content 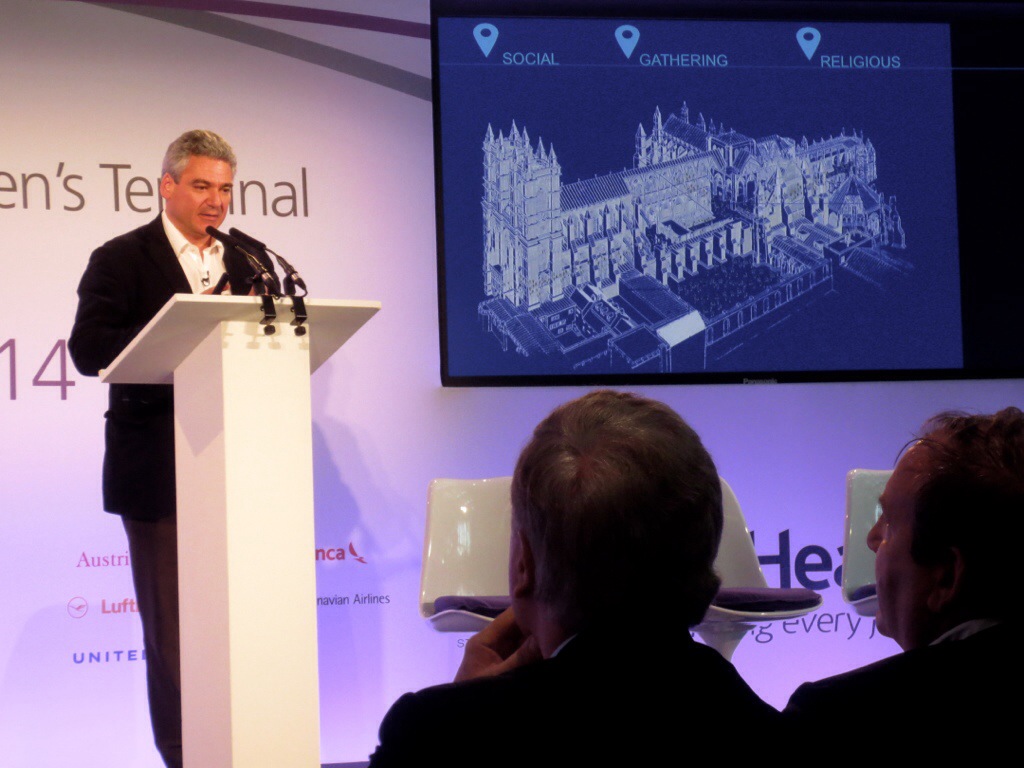 Large scale and monumental sculptures are now the norm in airports across the globe. Some are successful such as Christopher Janney at Miami International (1) and some slightly dubious like Luis Jiménez’s Blue Mustang at Denver international (2). It’s not just public art; the Rijksmuseum at Schipol Amsterdam (3), the Korean Culture museum at Incheon International (4) and Mumbai’s Chhatrapati Shivaji (5) all offer a museum type installation with variations on historical objects.Why are airports trying to do something that museums and galleries already do so well?

There is a new piece of public art at Heathrow by Richard Wilson called Slipstream. Visiting Heathrow to see it,I was caught up in the press fanfare which circulated the sculpture and the opening ofarchitect Luis Vidal’s Terminal 2. At the press conference, there was the usual contradictory mix of jargon thrown around. As well as an airport, Heathrow is a “hub”, a “destination” yet also a “gateway” and worryingly the final phrase of the powerpoint was “Welcome to your home in London”. Vidal named it a modern day “cathedral”, while comparing it to the Tate Modern and also Covent garden. Its automated systems suggest that it’s borrowed the most from the supermarket, and it could probably be compared to a range of other public buildings. There was a clear a confusion of values and a blurring of what public buildings are actually built to do.

The most shocking of all, was how the airport was compared to an art gallery. Although airports have a capacity to show art, their capacity is not designated for this reason. Capacity is firstly designated for the millions of people which will walk through the doors to travel. Therefore, although the space can be compared to the Turbine hall at Tate Modern, they are completely different spaces. Terminal 2 is a thoroughfare, where people won’t be milling about at the weekends, but passing through on the weekdays for business. Tourists will no doubt be on their way to the Tate modern, not hanging out at the airport.

A plane takes off from Heathrow every 45 seconds. That is its function. Heathrow was designed in the 1940s and 2014’s Terminal 2 is now the fourth generation of airport terminal building, but how has the airport become so ashamed of itself? Do airports have this same stigma as Public art does in the art world? Public art must tick so many boxes. It must be durable, unbreakable, weather proof and unoffensive to the public (see 6), yet not too aggressively obvious/offensive to the art world (see 7). A successful piece of public art will tick this first level of boxes and on another level, it should also be culturally relevant, a tourist attraction and photo opportunity.

Curated by Public arts agency Futurecity, Slipstream has ticked all the boxes andit’s a complete success story: the sculpture is visually appealing, unobtrusive and out of reach. It is an unashamed response to its environment, but it works really well. The semi-buffed aluminium shell blends beautifully with the environment. Itssheer volume makes it awe-inspiring and easy to look upon at the same time, which is important in the early hours of the morning after a 13 hour flight.

Looking at the general trend of public art in airports across the world, Heathrow has narrowly missed what could have been a public art disaster. Therefore, inspired by Slipstream‘s success, I would like to set some rules for the Artport. Public art in an airport should enhance and not define, it should be a blend rather than a statement, it should be inspired by its environment and it should be designed in consideration of the architecture.