Kimberley will attempt to combine her knowledge into contrasting aspects of artistic studies: History of Art and Contemporary Art and Theory. Her challenge = to pick a room of the National Gallery, London at random and find a painting there, whether it be Gothic, Renaissance, Impressionist or Medieval in style, to analyse using contemporary theory. 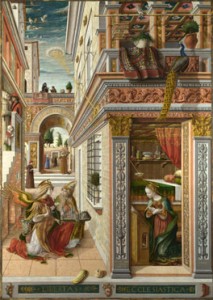 Crivelli’s Annunciation represents everything that was typical of Medieval Italian painting; rigid, crude, characature-esque figures in unnaturally complicated poses and deliberately artificial still life elements.  A maze of angles, figures, movement and colour, this painting is rich and highly decorative, if not a bit sickening. Wealth and religious iconography are splattered across the canvas, asserting the patron’s spirituality, prosperity and intellect. Its an equivocal 15th century collage of bulging bank statements, designer labels and promotions.

Such a crushed composition, teamed with allusions to divine consumerism, capitalism and society’s dependance on materialism as a signifier of dominance, wealth and value, sparks allusions to contemporary theory surrounding mass culture. Most obvious comparisons can be made to Pop Art, whose product placement, bright, complimentary colours and vulgarity can be seen echoed in this image. More obscurely however, and perhaps more accurately, Crivelli’s “The Annunciation with Saint Emidius” draws identification with both the aesthetics and anthropological theories of THE INDEPENDENT GROUP. Prefiguring Pop Art in Britain by a decade, the Independent Group aimed to create a composite portrait of vernacular, popular culture using discarded, found objects, photomontage and a ‘cut and paste’ aesthetic of layered collage images to highlight anthropological issues and the overlooked signs and symbols that structure everyday life. Crivelli’s painting shares these aesthetic qualities as his compositional elements are conjoined and confused. His uneasy, unnatural perspective echoes the framing of Richard Hamilton’s collages, such as “Just what is it that makes today’s home so different, so appealing?” (1956) as does the juxtaposition of the mundane and the significant. Elaborate decoration, riches, jewellery and religious iconography are crammed into the painting, alongside, and indifferent to, normality. Whilst the Independent Group aimed to critique popularity’s vacuous obsession with consumerism, Crivelli actually intended the opposite; to promote the spirituality and wealth of his Patron, Pope Sixtus IV. In applying contemporary theory to this image, Crivelli can be seen as critiquing the consumerism of faith, and anthropologically, the impact our everyday actions have on the afterlife and society in general. He is making direct comparisons between money, materialism and spiritual sanctity.

Crivelli’s works are also characterised by a tension between the real and unreal, a notion found again in Richard Hamilton’s collages. Realism and superficiality are employed by Hamilton to induce humour and comment on the absurdity of everyday life, a commentary that is obviously not established in Crivelli’s painting, but whose aesthetics are mirrored.

“The Annunciation with Saint Emidius” absorbs both the aesthetic and anthropological theory that was initiated by the Independent Group in Britain in the 1930’s. The 15th Century painting, despite representing an extremely contrasting culture, still comments on society’s preoccupation with consumerism, materialism and celebrity. Whilst Crivelli’s celebs are religious figures they are still ridiculously promoted, and the anthropological obsession remains. Comparisons, however abstract, are there. What is shocking here is not the curious application of contemporary theory, but actually its relevance. Western society has not really changed. People are still obsessed with the same things; consumed by money, material, fame and the promise of promotion. 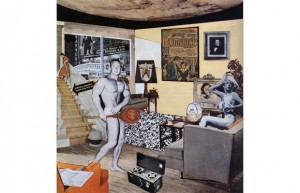 [ Richard Hamilton, “Just what is it that makes today’s home so different, so appealing?” , 1956] 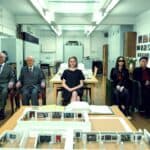