This season the Photographer’s Gallery hosts three outstanding exhibitions. Each space boasts compelling images that convey more than just the physical aesthetics presented on the surface. Contemporary theory, discussions into the role of photography in art and as an autonomous medium are thrown around, with each separate exhibition bringing forward a new exciting conversation. Each are totally different but completely complimentary of one another. 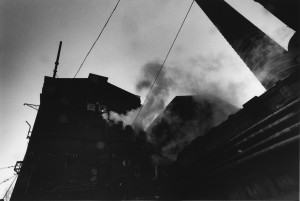 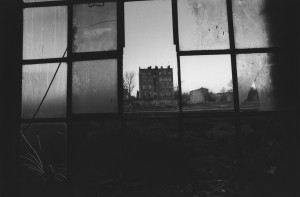 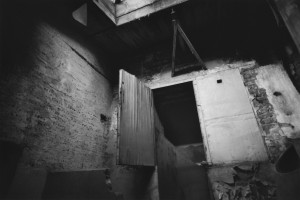 ‘The Factory Photographs’ features over 50 black and white images of dark and brooding derelict factories that exemplify Lynch’s unique cinematic, dramatic photography style. They capture the labyrinthine passages, detritus and decay of what are now haunting cathedrals of a by-gone industrial era. His images are beautiful and nostalgic, recalling the romanticism of the ruin. Yet in his ability to evoke surreal, foreboding, desolate imagery, the factories remain a dangerous place. This sense of threat, yet vulnerability is seconded by the sound works, designed by Lynch, that feature in the gallery space. Creaking doors, cracking debris and sounds of screeching metal play over and over in an ominous loop that aid the metamorphoses of Lynch’s photographic images into other-worldly, threatening places. The audio compliments the visual here succinctly; allowing a paradox to emerge, between absence and presence: fear and melancholy that is utterly entrancing to any onlooker.

“I just like going into strange worlds. A lot more happens when you open yourself up to the work and let yourself act and react to it. Every work ‘talks’ to you, and if you listen to it, it will take you places you have never dreamed of.” – David Lynch

The exhibition is curated by Dr. Petra Giloy-Hirtz, a curator and author based in Munich.

This rich and exciting new exhibition “Taking Shots” coincides with the centenary of Burrough’s birth and is the first major exhibition worldwide to focus on his impressive photographic oeuvre. “Taking Shots” displays over 100 works, mainly black and white, and offers a delicious visual plethora of mediums, such as postcards, magazine and book covers, adverts and a short experimental film, by Antony Balch, that are all tantalising, fascinating and technically provoking. The title “Taking Shots” refers to the action of photography but also to Burrough’s well-known heroin addiction and his obsession with firearms.

His works ingeniously adapt the formal characteristics integral to photography in order to discuss objective truth and subjectivity; the licence to contrive, interpret and deliver aesthetic experimentation. Burroughs outlines the flaws of conceived truth in the photographic image using illusionary techniques and visual tricks to convey definitive subjectivity. His experimentation and fascination with photography’s ability to discuss and disrupt the objectivity/subjectivity debate is evident in his ‘cut-up’ technique. Burrough’s cut and folded visuals together from multiple sources, creating new arrangements, connections and meanings in his complex collages. For him, these images also represent the interruption and the inconceivable fluidity of time and space, in which the camera is able to cut out pieces of the continuum to be repositioned and disseminated. In one clever image, glass panels featuring composite, ‘cut-out’ images are laid over one another to create a ‘photo-sculpture’ that, when photographed autonomously from various angles, creates paradoxical images, from which the 3D source is unrecognisable.

“I pay a lot of attention to photographs because of characters. I’ll say, ‘Well, that picture looks something like one of my characters, and I’ll build up a composite picture of what a character looks like” – William S. Burroughs.

The personal intricacies of his artistic practice can be monitored on the surface of many of his photographs as they bear markings, scratchings and doodles from Burrough’s hand. He envisioned photography as a disposable medium; a cheap form of aesthetic research.

This exhibition is curated Patricia Allmer, Chancellor’s Fellow in Art History at the Univeristy of Edinburgh, and John Sears, independent literary critic.

Whilst Lynch and Burroughs are personal favourites, other fantastic artists are also currently on show, such as Andy Warhol and Alan Warburton. This season, The Photographers’ Gallery is definitely worth a visit.