Old tin cutlery before the invention of the fork brings together a selection of emerging and established artists whose work is loosely comparable through its unusual handling of loaded subjects. Hierarchies and conventionally agreed approaches are set aside for new methods of discussion and appropriation. This spectrum includes the direct address of taboo to a slighter manipulation of expectation or reality. Often the effect is that contained, individual visions speak of larger concerns, with a subtly critical eye trained on politics, religion, gender, race, community or identity.

The work in Old tin cutlery… is frequently playful or absurd, sometimes macabre and elsewhere latently unsettling.
The agreed order of things is rearranged with assured disregard and different shades of humour, celebrating understatement in all its forms. Elio Rodríguez (b.1966, Havana) operates with cheerful swagger when addressing the Afro-Cuban culture of machismo and its appropriation by Western eyes. Ghanaian artist Paa Joe’s (b.1945, Akwapim) self-consciously kitsch sculpted coffins celebrate life with the pomp and extravagance of ancient Egyptian tombs and West African traditional tribal burial rituals and art practise. Vulgarity and tenderness are balanced in Armen Eloyan’s (b.1966, Armenia) anthropomorphic figures, often based on cartoon characters, acting out distinctly human and even universal roles. Mino Maccari (b.1898, Siena – d.1989, Rome) takes a satirical swipe at relations between the sexes, deploying a cast of naked women and animals at the hands of objectionable military figures.

Rose Wylie (b.1934, Kent) describes her works as ‘art misfits’. Stories and ideas fluidly overlap, threading in and out of view, drawing wide inspiration from film, literature and even the scraps of newspaper on her studio floor. Self-taught artist David Burton (b.1883 – d.1945) produced superficially simple images which document more complex political situations and ideas. Freya Pocklington’s (b.1984, Lancashire) Conté crayon and ink works present enclosed narratives whose scattered references assume their own logic, critiquing modern society’s frameworks. Robert Nicol’s (b.1980, Dundee) watercolours similarly embody surreal scenes of figures cut loose, engaged in convincing scenarios, the remnants of which are found in his ceramics. Child and adulthood are sometimes seen to be interchangeable, with Clarisse d’Arcimoles (b.1986, Paris) weaving together fragments of the past with borrowed memories and constructed histories.

Imagined and real environments are entertained together with unlikely associations, while understanding is repackaged and made palatable, resulting in odd combinations of the benign, fanciful or alluring, which ease communication and open discussion. Mehreen Murtaza (b.1986, Riyadh) subtly reverses categories with power structures dissolved through meticulous reconstruction and humorous juxtaposition. This subtle humour is replaced with jocular ridicule in Douglas Pérez Castro’s (b.1972, Santo Domingo) canvases, which directly challenge authority through Cuban history. 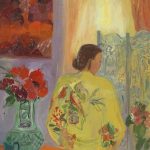 Messums Wiltshire first exhibition of 2019 is PAINT: THE SEEN, THE UNSEEN AND THE IMAGINED

Messums Wiltshire first exhibition of 2019 is PAINT: THE SEEN, THE UNSEEN AND THE IMAGINED featuring works by emerging and established artists