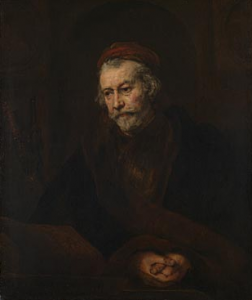 Room 23 features paintings by the renowned artist Rembrandt, including mainly portraits, that aim to demonstrate how his artistic style developed throughout his career.

“An Elderly Man as Saint Paul” is a three-quarter portrait of a male; a projection of a figure in a darkened space where the hands and face are the most illuminated aspects of the painting. The dark background is all encompassing – the foreground features are swallowed into the black shadow, forming a confusion between figure and ground that draws comparisons to the theories surrounding art, space and relationships by the famous philosopher Sartre. A presence is at once representative of an absence. Everything and everyone has a relationship to that and those around them. Within a painted image, what is depicted is not really there, it is a mere copy, but still maintains a relationship to its surroundings. Sartre stated that the negation of the figure consequently leads to the negation of whatever objects or areas were supposed to be that figure’s ground. Everything is related to each other. The figure is at once related to the pictorial ground and the ground it occupies. The ground with no figure, as is slightly adhered to here in the darkness, no longer retains any purpose; the purposeless of the ground is symptomatic of the absent figure. In other words, as there is no-one occupying the space in the painting, there is only darkness to be seen.

“Things are entirely what they appear to be and behind them… there is nothing.” (Jean-Paul Sartre)

Without a definitive presence of a figure here, only illuminated hands and face, nothing else remains.

Such a mass of darkness disturbed only by a pensive face and clasped hands has comparable visual sensations as experienced with Abstract Expressionism, such as the paintings of Mark Rothko, infront of which the viewer is wholly focussed or suspended in confrontation. The viewer is exposed infront of this image also, as if staring into an abyss that is only disrupted by a melancholy face that aches with unavoidable emotion. This figurative distraction in the painting leads to the notion, in an abstract sense, of ‘the return to the figure’ in post-modernism; the collapse of self-deconstructing modernist aesthetics and the emergence of new, post-modern, figurative philosophies. The painting therefore represents a journey; from modern to post-modern.

This wild application of contemporary theory and completely abstract view of the painting as a representative of the fall of modernism to the evolution of post-modernism is again wholly contrasting to traditional interpretations. This is a stab in the dark employment of alternative theory to Rembrandt’s painting.