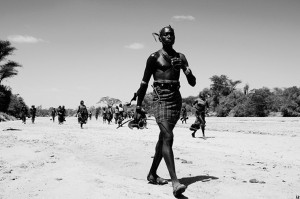 “In Ethiopia”, the first solo exhibition by Nikolai von Bismarck, displays over 20 black and white, framed images captured during his experiences as an embedded photographer in Ethiopia, early 2012. Nikolai, rather than focus on the religious rituals and ceremonies that normally entice photographers to the region, aimed to capture everyday life; the emotions, experiences, struggles and triumphs of the tribes-people he now represents. The exhibition space at Francis Street is modest, humble and raw; the walls and concrete construction left bare, un-plastered and un-refined, seconding the honesty captured within the canvas.

‘For three weeks I drank cow’s blood for breakfast, washed in the river and slept in a tent that was guarded by kids with AK-47s. I took a lot of photographs, I painted with them, drank ouzo with them, fired guns with them — I became one of them.’ (Nikolai von Bismarck)

The photographs are here to show, yes, but also to sell. The private opening night boasted an impressive guestlist, including huge public figures such as Bob and Pixie Geldof, Princess Beatrice, Ronnie Wood and Jerry Hall, at which numerous photographs were sold. Notably, each canvas is not unique, but due to the multiplicity of their medium, are reproduced as an edition of many, allowing several keen buyers to purchase the same image. 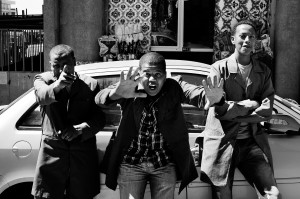 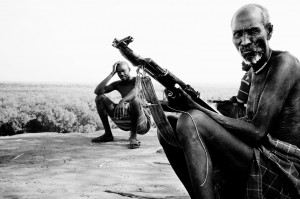 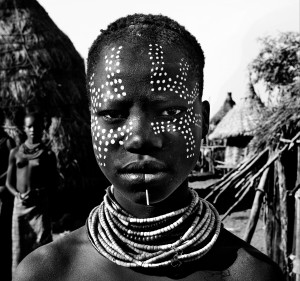 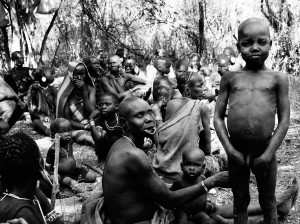 Nikolai’s images are stunning, solemn, provoking and personal, owing their aesthetic, truth and creational process to photo-journalism, but also featuring countless art-historial references that employ resonation within the viewer. 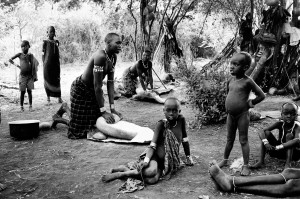 The above, untitled, photograph captures a collection of the Mursi Tribe. The figures’ relaxed stance and activity demonstrates the level of trust between subject and photographer, a notion upheld in the cropping and positioning of the image. The right-foreground houses crossed legs, amputated from the body by the picture frame. Untitled owes to Mattisse’s “Joy of Life” (1905-06) in compositional traits, such as the arrangement of the figures and sense of freedom. Being shot in black and white however generates a matter-of-fact, stark, authentic engagement between subject, camera and viewer. We look not into an idealised, celebratory dance or festival, but instead upon the everyday, a sense of normality that is so removed from our own, that it becomes both beautiful and shocking to witness. 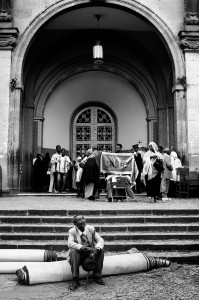 Untitled, taken from Nikolai’s Addis Ababa series echoes again compositional traits and architectural vocabulary from Raphael’s “School Of Athens” (1509). Whilst the stone steps and receding arches make this photograph great in its own right, the parallels to Raphael’s High Renaissance painting are undeniable; reinforcing the grandeur, and powerful, resonating potential of the image. However, truth and honesty is maintained in the slightly off centre framing of the image. Whether such references are made with conscious thought or without, the images are propelled in interpretation, refinement and the level of connective empathy between subject and viewer. His authentic images capture the essence of these people without exploitation. Nikolai allows the spectator to get involved in something so removed from them, something foreign, something magical, which is only successful due to his attention to aesthetics, as well as remaining true to the people he has photographed.

This exhibition only runs until Sunday 8th December, so quick! Check it out. 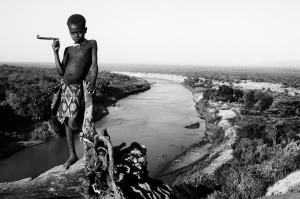 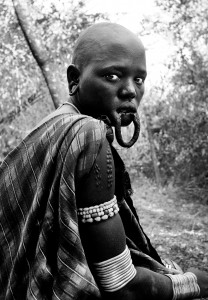 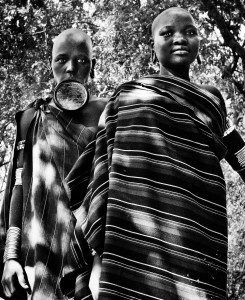 Nikolai von Bismarck was born in Germany in 1986 and raised in London. His first job was working for Mario Testino in 2003 and his first photo-shoot was commissioned by Isabella Blow when he was just 18. From June 2008 to December 2010 he worked for Annie Leibovitz to further his knowledge and understanding of photography. His own work has since appeared in numerous publications including Harpers Baazar, Tatler, The Mirror and The Times. For his photographic projects, both personal and commissioned, he has travelled widely in Burma, Cambodia, and to the slums of Bombay. He has taken photographs of and for the orphanage in Oradea, Romania, where he spent time living in and photographing gypsy colonies.

In October 2013 Franca Sozzani, Editor-in-chief of Vogue Italia said, ‘I’ve never made a mistake on a photographer, now you have to put your money on Nikolai,”