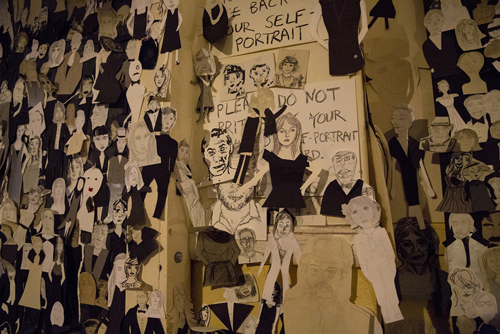 Following a series of 17 successful balls at the Grand Eagle Hotel in June and July, Secret Cinema and Stuart Pearson Wright will unveil the large-scale painting of thousands of guests, secret love letters found in the hotel, and a portrait of Laura Marling to be exhibited at Riflemaker in the heart of London from the 19th November to the 5th December.
Secret Cinema invites all former patrons of the hotel to their Opening Night tomorrow November 19th from 6pm to 9pm.

Secret Cinema presents Laura Marling brought Once I Was an Eagle, Laura Marling’s latest album to life in the form of the Grand Eagle Ball at the former Cardinal Pole School, Hackney, from the 13th June to the 2nd July 2013. The school was transformed into the Grand Eagle Hotel (set in 1927) for 17 performances that marked the beginning of Secret Music: bringing the themes, ideas and sounds of an album to life across disused buildings, Secret Music makes use of the space to stage secret concerts and impromptu performances to create new ways of experiencing live music.

ABOUT SECRET GALLERY
Secret Gallery launched as part of Secret Cinema’s production of The Shawshank Redemption, to bring existing artistic talent and emerging graduate work into a four-dimensional immersive space. The art, relating to the main themes of the production and dispersed throughout the performance space, included works by 19 international artists and blended in seamlessly with the narrative. For more information visit facebook.com/thesecretgallery.

ABOUT STUART PEARSON WRIGHT
Stuart Pearson Wright (b.1975) has exhibited at the National Portrait Gallery (which holds twenty-seven of his works in their collection), the Walker Art Gallery, Liverpool, The Geffrye Museum and Jerwood Space, London. His work reflects a search for lost identity. Wright is known for his ‘pseudo-portraits’, which suggest an inner state with pathos and dark humour while exploring, and also dispelling stereotypes of masculinity and femininity. At Riflemaker, through October and November, the artist will present a new group of portraits, the ‘scenes’ taking place within one small room. Wright cites the closing sequence of the early 1980s TV series The Incredible Hulk, with its attendant heart-wrenching ‘lonely-man’ theme, as a watershed moment that stirred deep sadness in him as a boy, teaching him everything he needed to know about existentialism and the human condition. The apparent frivolity and vaudeville melodrama in the paintings is underscored by a dark,Pinteresque,humour. www.stuartpearsonwright.com

ABOUT LAURA MARLING
The new album from Laura, the Mercury Prize-nominated ‘Once I Was An Eagle’, was recorded at the Three Crows studio of producer Ethan Johns (Kings of Leon & Vaccines). It is Laura’s fourth album – an achievement in itself for a 23 year old, the remarkable nature of her talent and career being underlined by the 2011 Brit Award for Best British Female Solo Artist, the two Mercury Music Prize nominations, and the NME Award for Best Solo Artist that she’s received in the years since her 2007 debut ‘Alas I Cannot Swim’. For more information visit: www.lauramarling.com