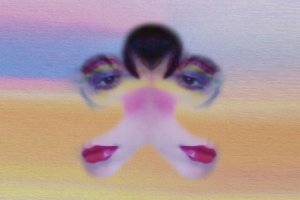 In Sophie Jung’s work brand names and logos present opportunities for word and image games, jokes, and the artist’s own idiosyncratic brand of story-telling. We encounter Apple Mac, iPod Shuffle, HSBC, easyJet, L’Oreal and more. Jung relishes in the rhythms, textures and sounds of words: ‘In many ways, I feel most in my element when I write. When I make work I approach it in that way’. Objects and words are malleable, open to infinite configurations. Things that are concrete (that we see and know and touch) enter into dialogue with ephemeral, fleeting phenomena: ‘I love absurdity but I love form as well, and it’s important that my work carries loops of meaning’. There are many points of entry to the associative aspects of Jung’s work which invites us to enter into our own word/image games. I pause on references to shells and oceans. In a performance, on one of the opening nights of the exhibition, Jung refers to the only work in the centre of the room as an island: titled ‘Archetypes’, it consists of an iPod Shuffle, and audio file, Perspex and Love Heart Sweets. She tells me about the process underpinning the installation ‘Nothing it just waves‘, and how she began with the Mac ‘Word of the Day’ Screensaver: ‘Every day I took a seashell and recorded it as though it were the ocean with words swimming in it. At the same time I practiced ‘She sells seashells on the seashore’. Then I thought what would happen if you turn the ‘she’ into ‘he’ and remove the letter ‘h’ from all the words’. 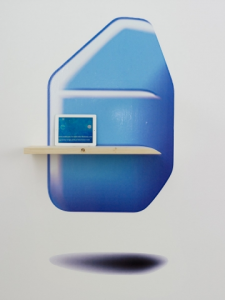 ‘Learning About Heraldry’ is Jung’s first solo exhibition at Ceri Hand. The historical practice of European Heraldry, its meanings and its uses, is placed under playful scrutiny. Heraldry is arguably a precursor to branding: a similar deployment of words and visual worlds to construct forms of identification, belonging or exclusion. Jung produces associative counter-narratives to those that, like Heraldry, demand a stable, knowable order of things. She complicates the linear narrative, and the kinds of stories that demand coherence and closure:  ‘You can take the meaning out of words and order them according to how they sound. And you can order them according to what they mean; and according to their rhythm’. Her work is reminiscent of Dada, and its deployment of absurdity, chance and the possibility of multiple narratives (of many beginnings and endings). Dada, of course, came into being in the shadow of the First World War, the absolute devastation of any belief in a complacent, singular account of the world. She says: ‘In Switzerland there is a close relationship to Dada, and I grew up with it. I always loved Dada. Making associations, and not making these associations borderless but rather concrete, to the point where it is almost ridiculous, is interesting’.

Jung’s work exists in relationship to another kind of politics, a twenty-first century politics in dialogue with capitalism. Not politics in a didactic sense but rather one suggested via sensations and affects that rest beneath the surface of tangible experience. Her work suggests our own inescapable entanglement in phenomena that are not simply benign, although they are an inescapable part of who we are in the world. Asked about the presence of brand names and logos in her work she says: ‘Maybe I’m really susceptible to picking up on being shaped by external forces. I resist and then give in quite happily. I’m also really fascinated by categories and how they overlap. I create all these different categories, which I imagine to have various textures. The relationship to capitalism is one category. This shapes things to do with our lives from how we dress to what we watch on television’. 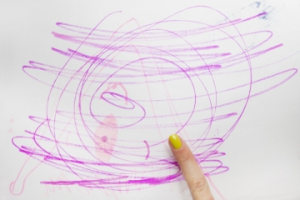 In Jung’s exhibitions and performances the familiar technologies of Apple computers and iPod Shuffles are mobilised alongside assemblages of found objects. Perspex and polystyrene, materials associated with twentieth century modernity and man-made substances are transformed into formal objects. In ‘Stewie Drawing’ Stewart Gilligan or ‘Stewie’ from Family Guy is projected onto Perspex surfaces. Above three formal objects – cut from Perspex and functioning as screens for miniature projected images – are air dough mouldings of hand prints, quirky references to the Facebook ‘like’. And on the floor standing in for actual projectors are imaginary ones created out of found stones and modelling dust. This idiosyncratic little triptych to Stewie is poignant and funny, and speaks to me of nostalgia and childhood memories. Objects and technologies of image and sound appear to function as props – prompts for performances experienced either live or via moving image projections or sound recordings.  But they are also (whether concrete or ephemeral) material things that we as viewers can experience from the perspective of our own subjectivities and associations. I was struck, moving through the show, by how works appropriating footage and sound from familiar television programmes, from Mad Men to Family Guy, drew me into spaces of memory and emotion. The experience of brands and favourite television shows is not a passive one, removed from how identities, and subjectivities come into being. They are intimately woven into how it is we experience the world in everyday life, and are embedded in how we remember our past.

Sophie Jung was born in 1982 in Luxembourg and lives and works in London and Basel. She  received the Aide à la création et à la diffusion en photographie in 2011. She was awarded the Photo Levallois Prize in 2012, and is nominated for the Edward Steichen Award 2013. Jung is currently undertaking an MFA in Fine Art at Goldsmiths, University of London. 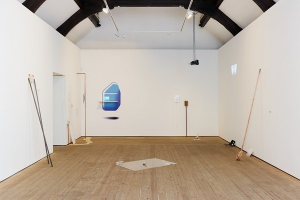