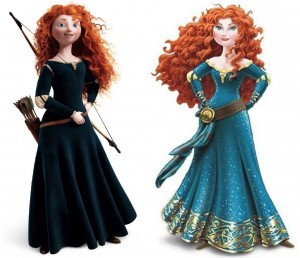 [ from left, Princess Merida by Disney/Pixar and the recently remodelled version ]

Clamour and objection has surrounded the ultra feminine, idealised, curvy portrayal of Princesses and admirable women in Disney films for as long as most can remember, but most recently the re-working of one particular “Princess Merida” has resumed the debate. When Brave debuted in 2012 Dinsey/Pixar received praise for its diversion from its continued stereotyping of women, portraying the main female protagonist with a tom-boyish figure, less exaggerated facial features, minimal makeup, flyaway hair and less associations with Western female beauty concerns. But “Merida” has had a makeover. After being crowned “Official Disney Princess” on 11th May Disney gave her a whole new look to celebrate the occasion. Suddenly, “Merida” boasts a fuller, hourglass figure, plumper lips, beautifully blow-dried auburn hair and glittery, golden robes. She is stunning. She completely complies to Western beauty conventions. Our children are yet again presented with an idealised image of ‘woman’; a skinny, pretty, passive female waiting around for romance. Young girls are instinctively drawn to the sparkles and glamour of princesses; it has been prescribed to them since birth. “Merida”, the rare break from the mould, the one attainable, substantial female role model has been destroyed, and again young children are presented with a perfect, sexy, newer version.

Yet again visual media has conformed.

This new transformation really hit a nerve with illustrator David Trumble, who has consequently set about re-working images of several real life female role models, adding a touch of glitz to their surface appearance, collapsing the heroine to fit one specific mould. His latest work is a collection of satirical illustrations of ‘princess-ised’ women such as Anne Frank, Marie Curie and Rosa Parks. Trumble’s women are sexy, slim, beautiful, wearing glittery robes and fantastic jewellery. They are also all the same age. He has removed any sign of a dreaded wrinkle or ageing dark under-eye, again showing society’s preoccupation with the ideal and women’s constant strive for youth.  “Our real world is more diverse, filled with so many different archetypes for young women to find role models in, so why then do we paint all of our fictitious female role models with the same brush?” [David Trumble]

Check out his images here: 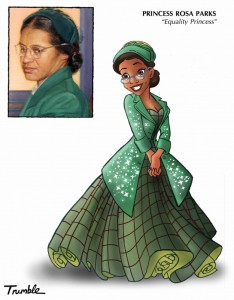 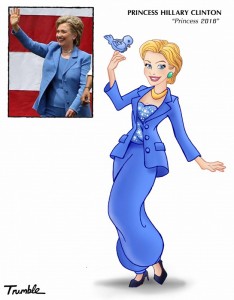 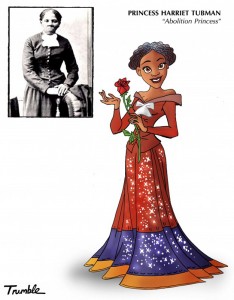 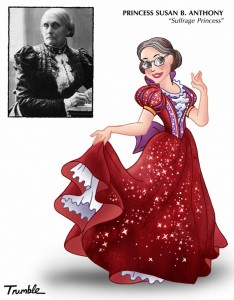 Trumbles’ illustrations, despite attempting to deconstruct the routinely sparkly Disney princesses, also faces internal criticism. His images are great, highlighting the ridiculous idealisation of women within visual media: catwalk models, advertising campaigns and mainstream TV, but his use of specifically female role models also seems troubling. Trumbles images of idealist females does deconstruct the Western beauty conventions, yes, but they also highlight society’s issue with stereotyping. Powerful, autonomous women are often considered aggressive, masculine, gay or ugly by the general population, most notably feminist women. With his illustrations Trumble also seems to be highlighting this, comparing the actual appearance of these women with the conventions of beauty. They are not all beautiful. They are real, actual women. So do Trumble’s versions bring them into popularity? Are these versions more suitable to a mass audience? Maybe these glittery adaptions will inspire young girls to be more like them, do more, achieve greatness and be remembered for more than their smooth skin and skinny legs?