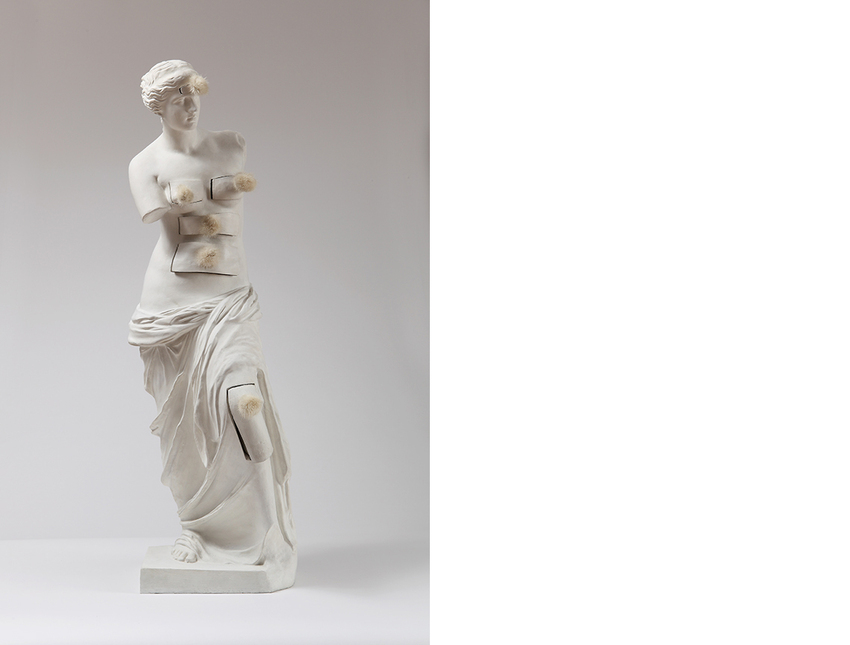 Blain|Di Donna is proud to announce its first historical group exhibition, Dada & Surrealist Objects. This will be the first show devoted to this important subject ever presented in any gallery or museum in America, and has been curated in association with the well-known specialist in Dada and Surrealist art, Timothy Baum.

The exhibition presents a retrospective overview of all aspects of this subject, and encompasses a full selection of works by every serious creator of objects from both the Dada and Surrealist groups. Chronologically, this exploration begins with Marcel Duchamp, whose invention of the readymade in 1913 gave birth to the separation of found or handmade objects from the more limited world of sculpture, usually confined to plaster, bronze, marble and occasionally carved wood that had previously represented, exclusively, in the realm of the third dimension in art.It continues through Arp, Man Ray (with an assortment of works from his New York, Paris and California periods), Dalí (represented by two works of major importance: Objet escatalogique de fonctionnement symbolique (Le soulier de Gala) and Vénus de Milo aux Tiroirs)

Magritte, Giacometti, Calder (two seminal works leant by the Calder Foundation), Miró (including a charmingly witty post-war work, courtesy of the Pierre and Tana Matisse Foundation), Bellmer, Kurt Schwitters, Kurt Seligmann, and an interestingly varied assortment of early works by Joseph Cornell. It also features two of André Breton’s famous “poem-collages”, boxes and book-bindings by Georges Hugnet, and other assorted treasures by Marcel Jean, Oscar Dominguez, Maurice Henry, a mixed media painting by André Masson embellished with sand, a shell and a feather, an interpretation of Alberto Giacometti’s ear by Meret Oppenheim, a painting encased in a hand-carved frame by Yves Tanguy, an intricately collaged bottle by Laurence Vail, as well as many other works rarely seen in public before.The presentation is augmented by a group of vintage photographs by Raoul Ubac depicting various objects created by Surrealist artists for the International Surrealism Exhibition in Paris in 1938: mannequins decorated by Man Ray, Max Ernst and others, and two works by Dalí: The Aphrodisiac Table (with Lobster Telephone) and the environmental phenomenon, Rainy Taxi.

Dada & Surrealist Objects will be accompanied by a fully illustrated catalogue with an introductory essay by Timothy Baum: private art dealer, collector and expert on all aspects of Surrealism and Dadaism, as well as published poet and writer. He is a member of the committees presently working toward the completion of catalogues raisonnés of the paintings of Man Ray, Kurt Seligmann and Yves Tanguy, and a study of the complete graphic work of Victor Brauner. He is also the publisher and editor of Nadada Editions, a small press that he initiated in 1971.

Harry Blain and Emmanuel Di Donna have opened their new secondary market gallery, BLAIN|DI DONNA, on the second floor of the Carlyle Hotel in New York City. The gallery launched its inaugural exhibition, René Magritte: Dangerous Liaisons, a survey of paintings, works on paper and objects by the Belgian Surrealist René Magritte in October, 2011.  Subsequent exhibitions include André Masson, The Mythology of Desire: Masterworks from 1925 to 1945; Jean Arp, A Collection of Wood Reliefs and Collages, and most recently Paul Delvaux, which was curated in close collaboration with the Paul Delvaux Foundation.

Specializing in artworks by Impressionist, Modern and selected Contemporary artists, the directors of BLAIN|DI DONNA offer advice to collectors on building collections, selling works discreetly, or buying and selling through auc­tion. Available works are also on view at the company’s private viewing space in London.