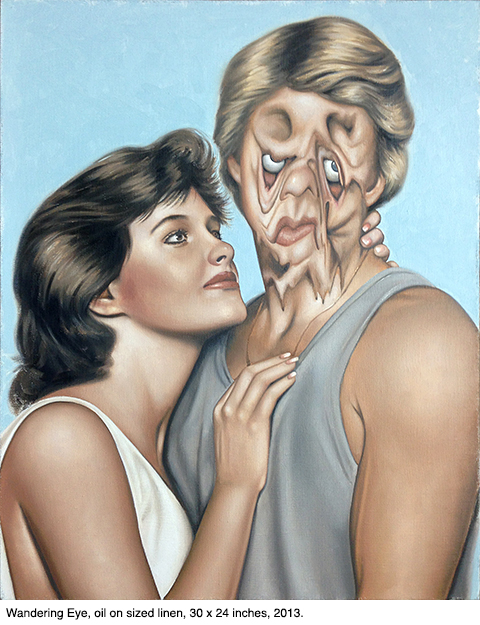 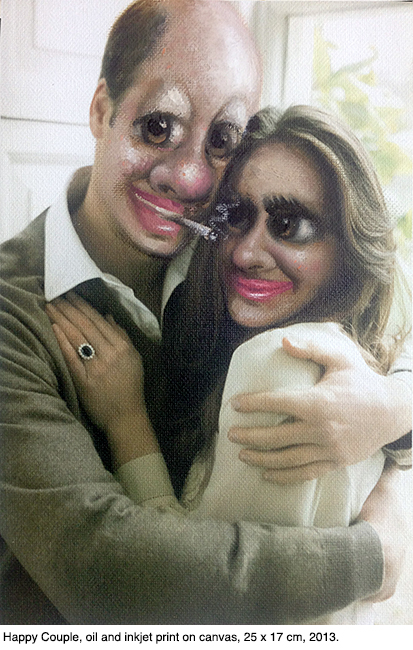 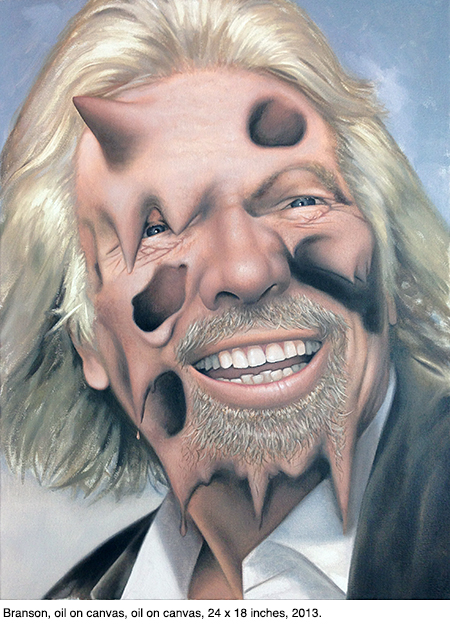 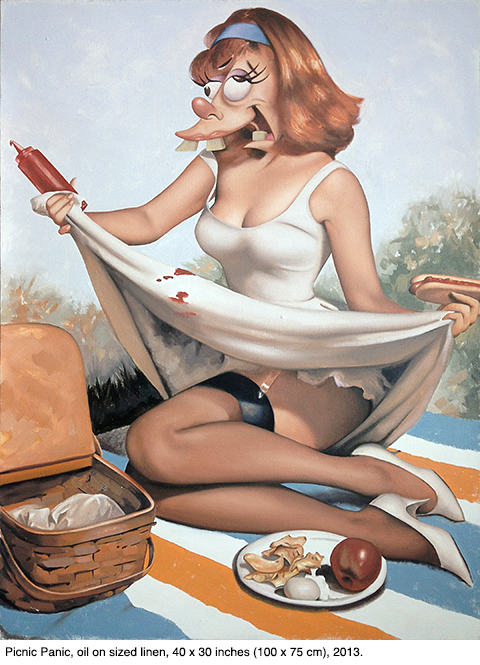 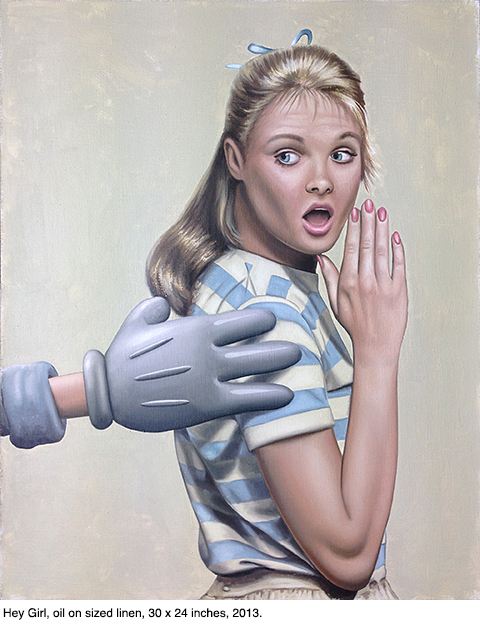 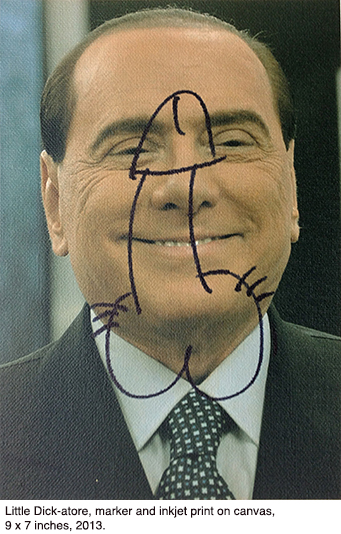 Nathan James’ current series of paintings, Punchlines, is based on the idea of subverting modern life’s most aspirational images and using them to take a grimly comic, darkly humorous look at contemporary life. Painting in oil (often making his own paints) onto canvas or linen, James takes images of Americana, advertising, pin-ups, Hollywood and traditional beauty and injects them with his own feelings towards the characters and the scenes they inhabit.

In Punchlines, the original intent of the source material is undercut by darker elements which at first seem superficially funny, but leave the viewer with a bleak, lingering aftertaste. Archetypal beauty has turned sour and perfection is replaced by a warped cartoon aesthetic. James’ work draws influence from both the failed industrial background of his childhood in Ontario and the fantastical world of cartoons and characters he grew up immersed in.

Born in Kirkland Lake, Ontario, Canada, Nathan James spent much of his life in the Toronto area and studied at the Ontario College of Art and Design before moving to London, UK where he currently lives and works.

What’s the meaning of the title for your latest exhibition ‘Punchlines’?
Nathan James: My last exhibition, CREEPSHOW, featured lots of dark and twisted work. Some made me laugh and for this one I wanted to do something more lighthearted and funny. I decided to set up an image and then undercut it with some sort of humorous lateral leap. The punchline is a disruption of an expectation.

LS: When I look at your portraits, the ghoulish masks that some of the characters have remind me of George Condo. Would you cite him as an influence?
NJ: Yes I love Condo’s work. Unfortunately I was too poor to go to his show at the Hayward gallery a few years ago. I was on my way back from a job interview via the 68 bus. I had an app on my phone that said, wrongly, that it was free. I had to walk all the way back to Crystal Palace.

LS: There are some recognisable characters in your new exhibition, including a portrait of Richard Branson with his face dissolving, and a familiar image of Prince William & Kate with their faces distorted, and some anonymous characters from 50s Americana through to the present day. How do you decide who you’re going to paint, and why do you mix up the period in which your characters reside?
NJ: When figuring out what to paint I tend to rely on a gut reaction. There is often something intangible about why a certain image will grab me. Sometimes I’ll work on sets of 3 or 5. When one painting works I’ll try out a couple more in the same vein and then move on to something different.

LS: There’s a painting in the exhibition with the words ‘I really hope my friends on Facebook like this’. Do you use Facebook, and how do you think social media has impacted on the lives of contemporary artists – for better or worse? NJ: I have been a Facebook user for years and I think that I use it like most people. It’s more of a personal thing for me rather than a way to network in a professional sense. But I’ve also met some really interesting artists on there and have become friendly with them. Tom Sanford is one example. In a lot of ways I think social networks are great for artists. It makes the world a lot smaller and gives likeminded people a better chance to connect. It can also gives rise to a pathetic urge to compete in terms of likes or followers. That’s what that painting was about.

LS: You were born in Canada and now work in London. What’s the art scene like in Ontario and how does it differ to your experience of the London art scene? NJ: I went to art college in Toronto and so had a group of friends from there. We’d all get drunk and go out to PVs together. We were dicks but it was fun. I was in my early 20s then and that social aspect was more important to me than it is now. I rarely go to PVs now and when I go to shows it’s usually on my own. I don’t think that reflects on either city’s respective scene. I’m sure there are plenty of dickhead art students out at openings here that are very much like my friends and I were at that age.