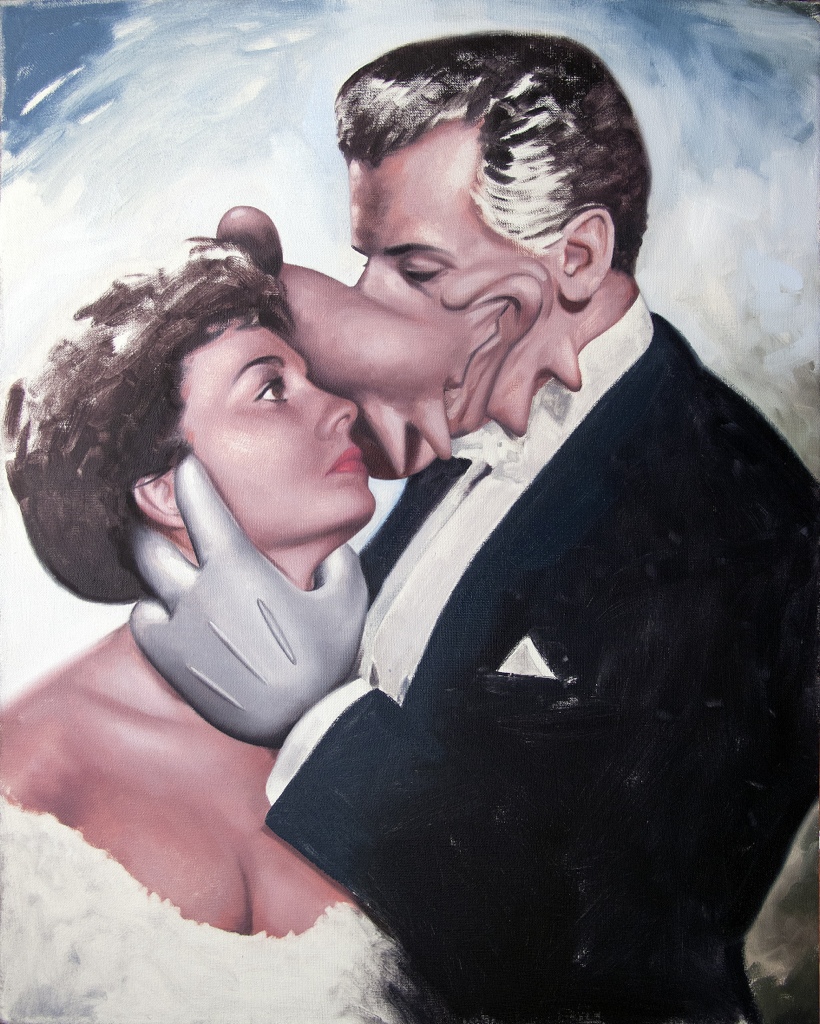 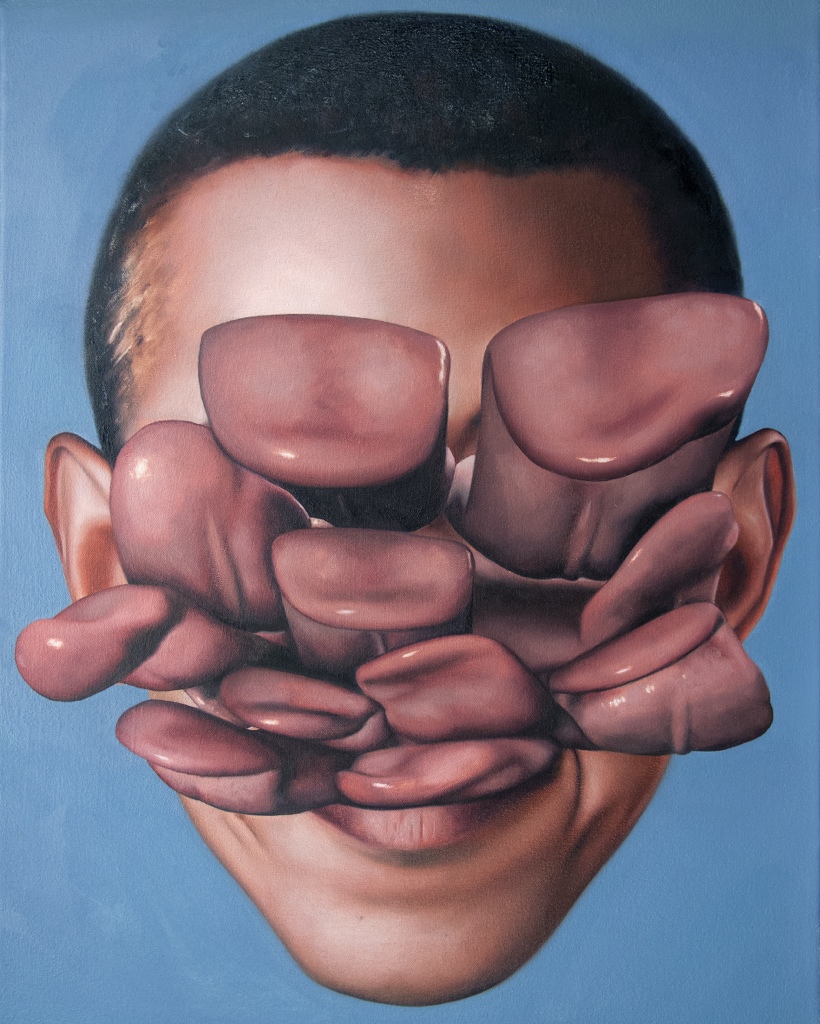 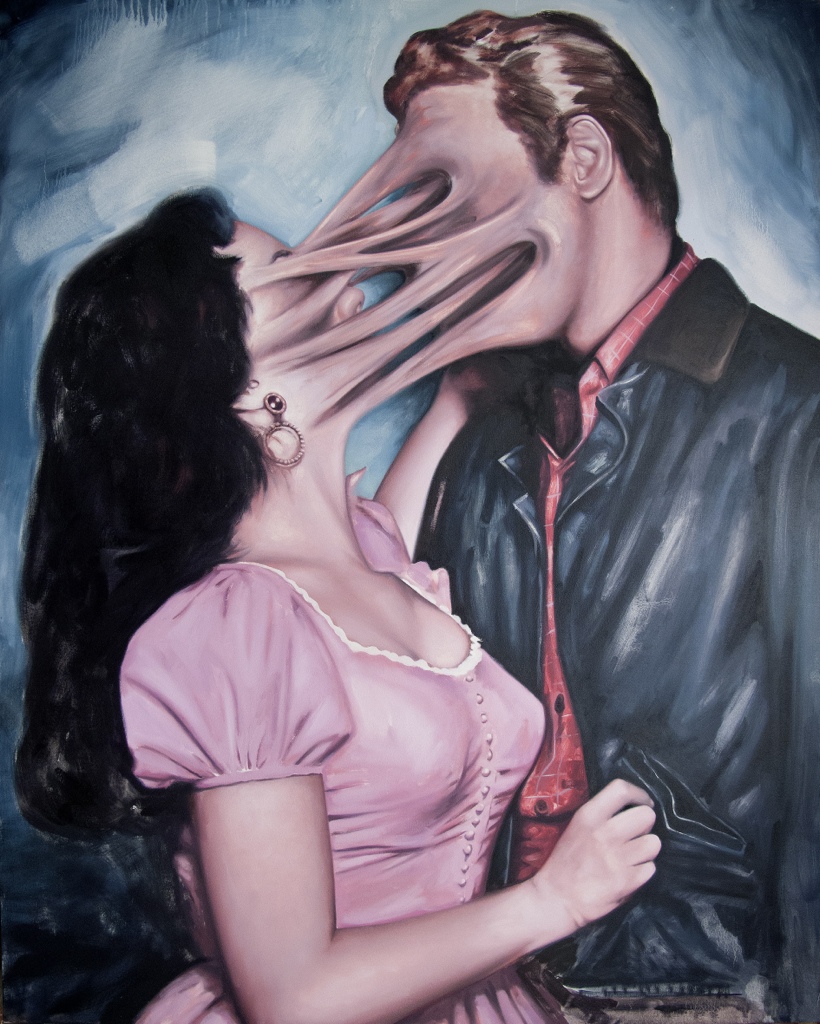 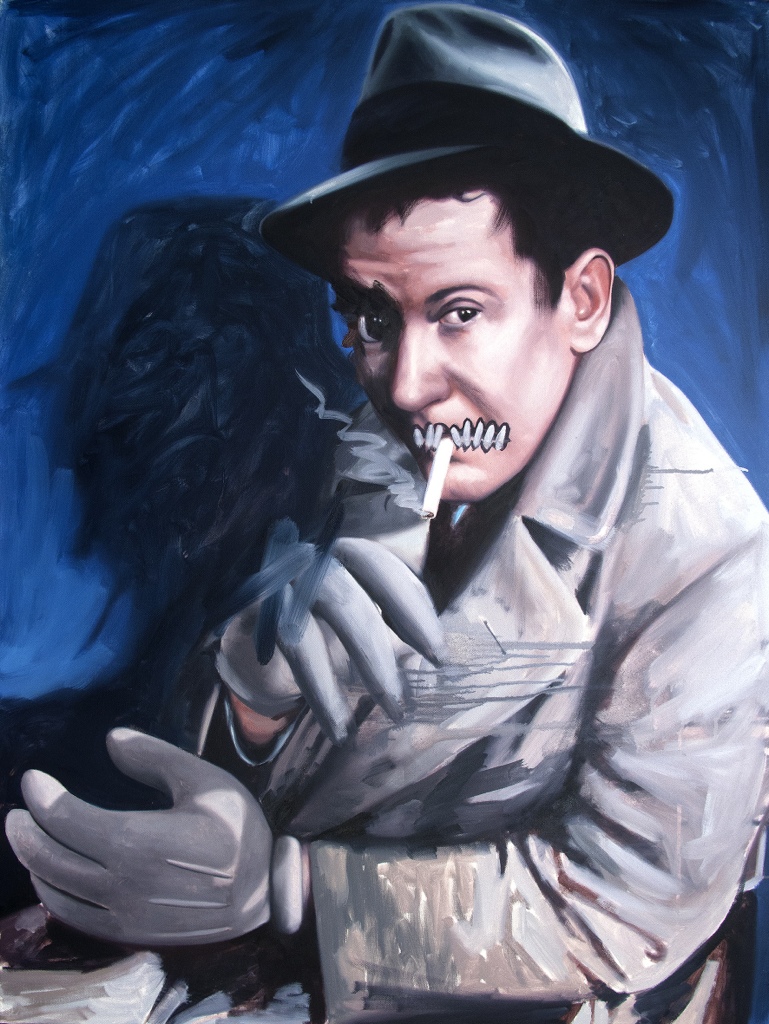 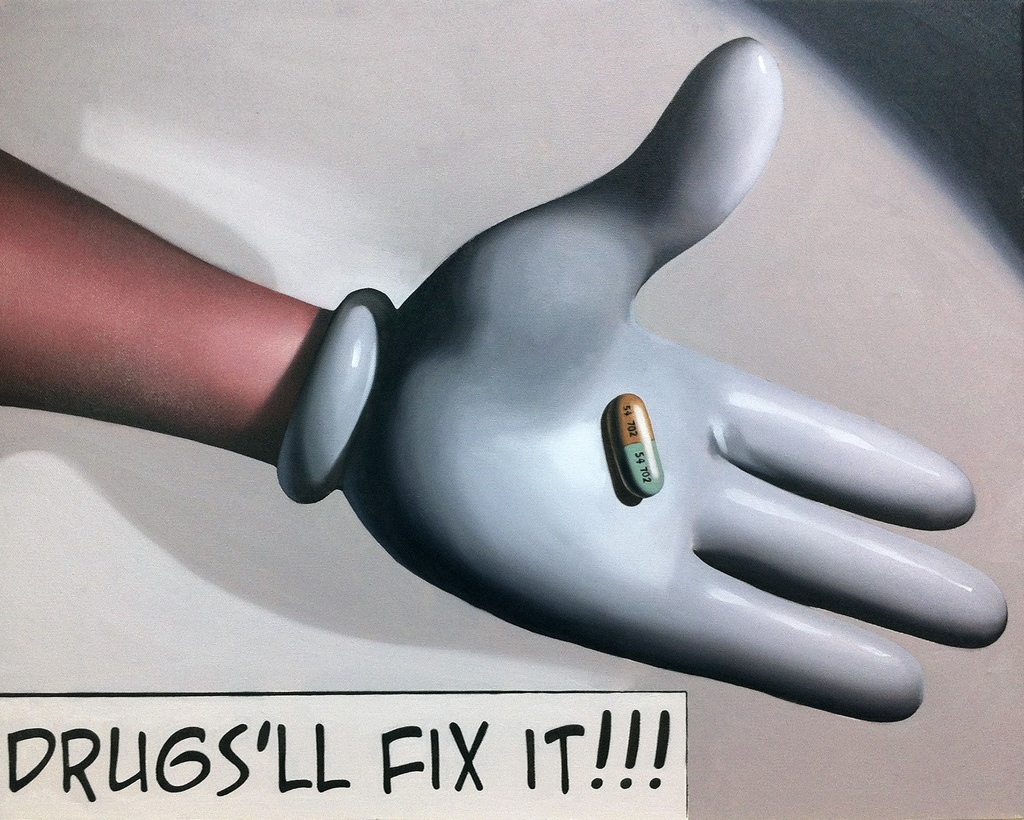 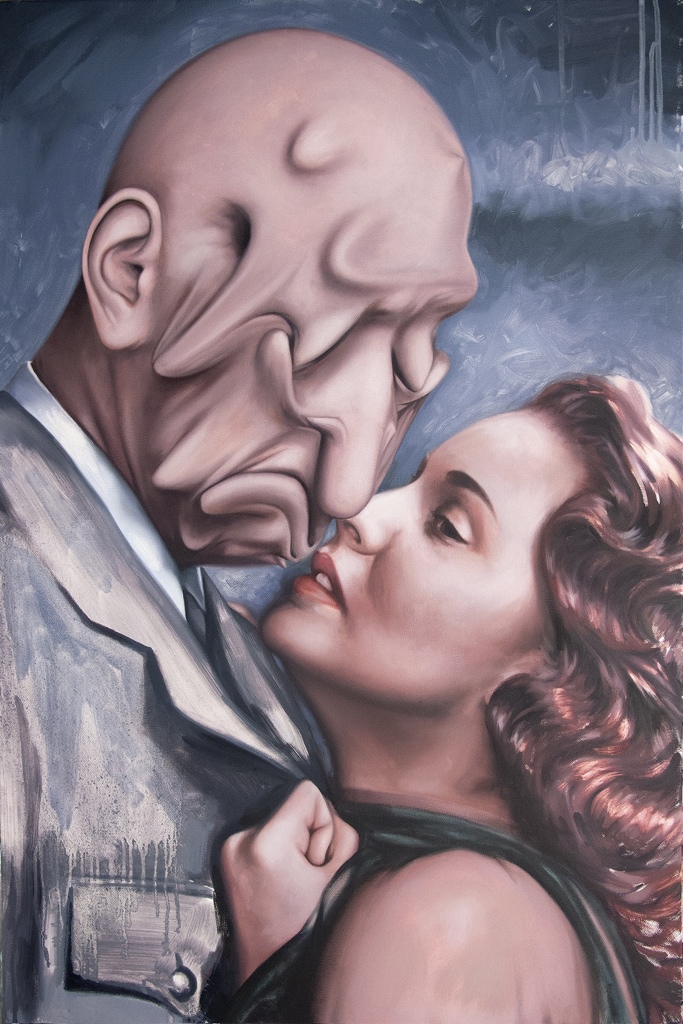 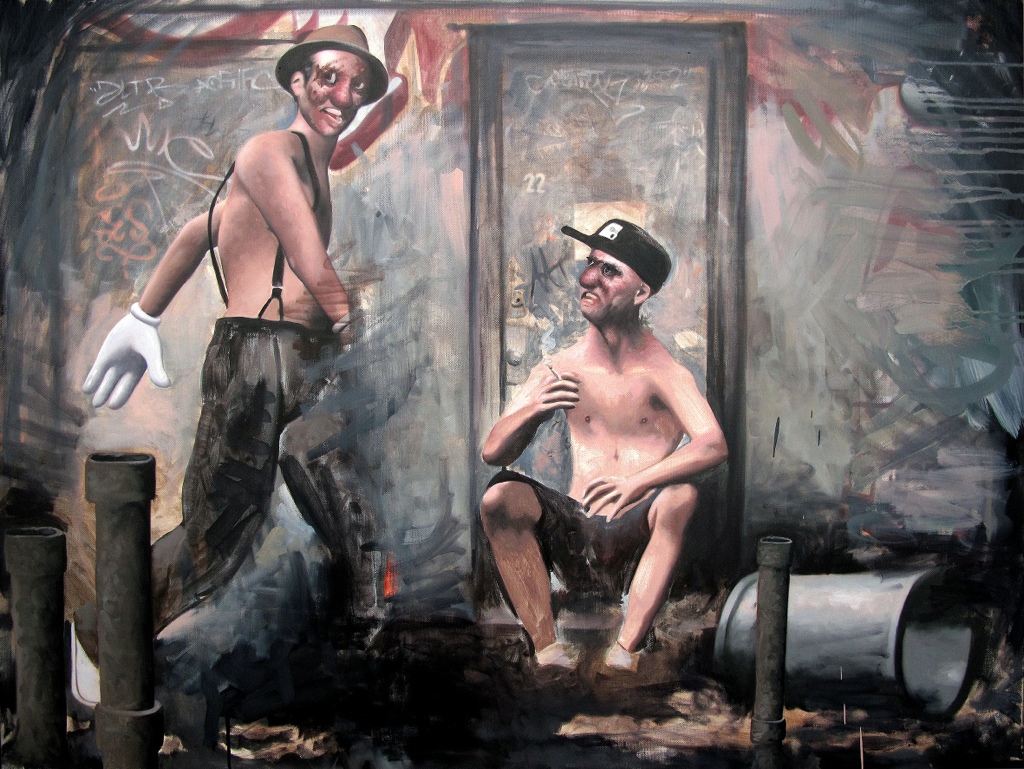 1.If you weren’t an artist, what else would you be?
I used to work for the phone company in Canada when I was a student and I quite liked that. Any kind of maintenance and repair work would suit me.

2. Can you tell us more about your work and what are the main ideas you would like to express?
It’s obviously informed by pop art, but I wanted to look at doing something darker with it. What would these glossy, hyper-real characters be like if they’d ended up in a bad part of life. And, conversely, what would ordinary people be like if they’d assumed some of the characteristics of the pop world? I grew up in this kind of strange, run down place in Ontario called Hamilton. It’s an old steel town which went bust in the eighties – you see a lot of these men who used to be somebody and buildings which used to mean something, all of them in various stages of falling to pieces.

3. How do you start the process of making work?
A lot of these images are based on images from old Hollywood magazines. I grew up reading a lot of old comics, history of art books, watching endless re-runs of old American films with my mom, skateboard artwork… all these things kind of muddled together and I know when I see the image which one’s going to work.

4. Do you consider the viewer, when making your work?
Not really. Maybe to the extent that with this new stuff I’m conscious that I’ll probably appeal to a different audience, but not much beyond that.

6. What defines something as a work of art?
Theoretically, I guess anything that elicits an emotional response in a viewer, intended or otherwise. But really, I’m quite traditional in some ways – you know, I work in pretty standard medium, and I take painting seriously. I spend a lot of time on each piece of work, and there’s still nothing that gets me more than the way that paint works on a canvas.

7. In times of austerity, do you think art has a moral obligation to respond topically?
Not specifically – as an artist, you often don’t know what work is going to emerge until you’re at least part of the way through producing it. But, that said, it’s impossible not to be informed by what’s going on around you. And, if I was being an armchair psychologist, I think it’d be impossible not to look at the work that I was producing when we were in a much more upbeat place socio-economically, and contrast it with what I’m doing now. I certainly didn’t set out to make any particular comment about where we are now, but you can’t really get away from your surroundings.

8. Anytime, any place – which artist’s body would you most like to inhabit?
I’d be Velazquez. The details don’t really matter, but purely the fact you could just bowl into places and go ‘Hey. I’m Velazquez!’ would be all the justification you needed?

9. What is your favourite ‘ism’?
Creationism.

10. What was the most intelligent thing that someone said or wrote about your work?‘Like all the best art, Nathan James’ new paintings challenge the idea that beauty is a universal term.’ – Jake Chapman

11. And the dumbest?
Somebody once said that they’d come to my show because ‘I’ve been told I’ve just got to come and check out the purple.’ I can imagine why one colour would totally bowl you over, but I’m honestly not even sure that there was any purple in any of that show’s paintings.

12. Which artists would you most like to rip off, sorry, I mean appropriate as a critique of originality and authorship?
John Curin’s work from the nineties. Kind of portrait based, but with a real element of caricature to it. He has a real technical ability, but could be very spontaneous, work very quickly.

13. Do you care what your art costs? State your reasons!
Yeah, of course I do. However, if I was completely fixated on getting rich there are a lot of other jobs that I’d have gone into! That said, I could have carried on producing the work I was doing in my previous series (Riff Raff) which were selling steadily for good prices and generating commissions

14. What’s next for you?
A long holiday to recover from the show. I’ve got a wife and dog who I need to catch up with as I’ve been holed up in the studio huffing paint fumes for the last six months and they’ve both been very tolerant…