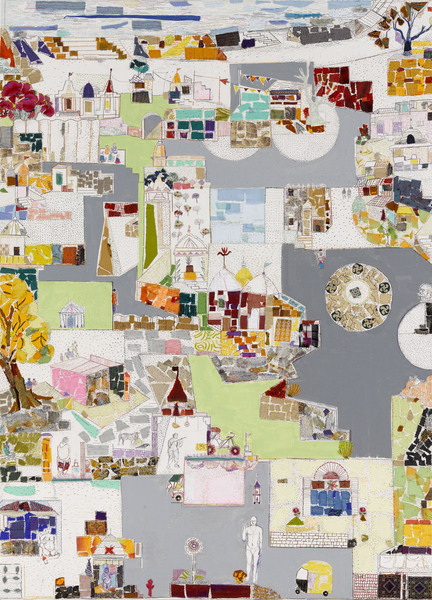 Sumitro Basak ‘Till Death Do Us Part’

Major works by three leading Indian artists from Kolkata never before seen in London have been selected for the inaugural STRARTA art fair by curator, Griselda Bear.

These artists, Sumitro Basak, Shreyasi Chattergee and Kingshuk Sarkar, reflect and demonstrate in highly individual ways the international cross-currents as well as the local traditions that are deeply embedded in the rich cultural life of the Indian city of Kolkata where they live and work.

Throughout their careers these artists have been exhibited by the Centre of International Modern Art (CIMA) in Kolkata and at exhibitions elsewhere in India. Griselda Bear’s attention was drawn to CIMA several years ago when she first discovered its remarkable programme which focuses on artists whose work relates to India but which is individual, distinctive and cosmopolitan. She says,

‘my own long-standing aim is to seek out artists elsewhere who demonstrate stature in their work of a kind that will stimulate and interest audiences here. When this is successful it has a powerful two-way effect of introducing exhibition visitors to new, international practice in the arts and also, importantly, of enabling the artists to develop further by seeing their work in a wider context.’

Sumitro Basak (born 1975) received his art training at Kala Bhavan, Visva Bharati University, an institution founded by Rabindranath Tagore, in Santiniketan, West Bengal. As seen in the 15 canvas, epic painting in this exhibition Basak is a storyteller who assembles visual fragments to chronicle his life experiences. In this painting he shows us the changing visual culture he finds around him as he travels through time and place.

Shreyasi Chatterjee (born 1960) studied art at Kala Bhavan and at Goldsmiths, University of London. She is also an art historian with a special interest in Indian miniatures. This is clearly evident in the way she presents her subject matter in the works in this exhibition where the traditional and rural is apparently being broken up and supplanted by the modern and urban. To reinforce her viewpoint she combines traditional fabrics and stitching with painting in modern-day acrylic on canvas.

Kingshuk Sarkar (born 1972) studied first at Kala Bhavan and later at Kyoto University where he trained in Japanese traditions and techniques of calligraphy and sumi painting. The monumental diptych in this exhibition reflects and depicts these interests as well as ominous spectres from his childhood when he lived in a tumultuous and terrorised Assam.

About Griselda Bear
Working simultaneously as an independent consultant advising organisations in the arts and wider educational and charitable sectors, Griselda is a curator with a long-standing interest in introducing UK audiences to the work of key artists from other parts of the world, involving collaborations with galleries from Canada to India and throughout Europe.
She has held senior posts at the Yorkshire Sculpture Park, Sadler’s Wells and the Royal Academy of Arts. Board appointments have included Trustee of the British Museum Friends and the Farley Arts Trust (the Penrose and Lee Miller trust). At STRARTA Griselda will present work from India and Singapore.
www.griseldabear.com

Something For The Weekend : STRARTA 2013