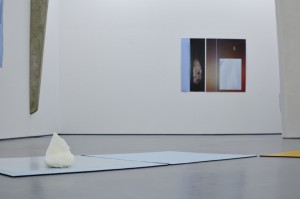 Flat on the floor an arrangement of four shapes. Like tiles, they are square but are cut from neoprene fabric. Two of the squares are blue, and two are orange. On one of the blue squares is a sheet of white polyurethane, and then a small organic form that, ambiguously, looks like a rock or a crystal, but is made out of resin. The white polyurethane sheet appears again on one of the orange squares. The meaning of this constellation of materials, and objects, is, at first, impenetrable. Interpretation is grounded in subjective responses and imaginative capacities. There is no line, straight and untroubled, that can be drawn between this floor work, and an object in the world. It suggests points of entry and then thwarts it. Titled ‘Blocks, plots, plains’, it is the first work encountered at Lilah Fowler’s inaugural solo show at Maria Stenfors, Passage and pair. Positioned adjacent to the gallery entrance, it inhibits movement, and surprises with its flatness. I have to stop and decide whether to spend time with it or move around it to something else. If I am to look more closely I have to kneel down on the floor, or enter the space it configures.

The materials neoprene and polyurethane that Fowler makes use of for her floor works (‘Blocks, plots, plains’ and ‘Blue in colour’) were invented in the 1930s, and embody histories of their own. These material histories are in many ways woven into the story of modernism, in architecture and design, and its embrace of synthetic, industrial materials and processes. They are also threaded into narratives of exile and migration engendered by the Second World War, and the subsequent circulation of European modernism to other parts of the world, notably the United States.  This summer Fowler participated in the Joshua Tree Desert Highlands residency in California, where the landscape photograph ‘Untitled’ was shot. She says of the residency, that was the impetus for some of the work shown at Maria Stenfors: ‘I was looking a lot at desert modernism and layouts of cities in the States particularly’. She continues: ‘I am interested in the layout of roads and cities because it forces you to think about space and become familiar with an environment’. 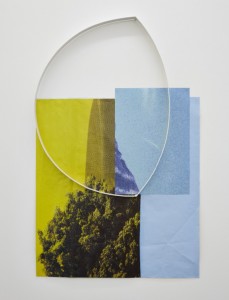 Vision in dialogue with movement is an important aspect of Fowler’s work but the exchange between them is never straightforward. Fowler built a buttress and an extra wall into the space of the gallery itself, and so how and where we look is, in part, directed and obscured. We have to walk around the wall to see one of her quasi-geometrical steel objects (‘Slant’). It resembles what we know in the world only obliquely, and leans irreverently against the wall, on the floor. The purpose of the concrete buttress to the left hand side of the wall is opaque, perhaps strategically, except that it invites us to think about our relationship to architectural elements, space and vision. An everyday object, a rubber washer is cast in aluminium and re-imagined in the space of the gallery. Titled ‘Band’, and suspended onto the wall, it is ambiguously artwork and architectural motif. In the world of Fowler’s exhibition the act of moving and looking exist in a relationship that asymmetrical, refuses complacency.  To see I have to move closer, forwards or backwards, up or down. Ambiguous hand-drawn forms, observed as I kneel down to look, are obscured beneath semi-transparent polyurethane surfaces.  In ‘Untitled’, a rock in a landscape is photographed in the black and white language of the visual document and archival record. The resin rock-like object in the gallery invokes, in miniature, the form of the rock photographed in situ. But the relation between these objects is one of displacement. Elsewhere the visual devices of found billboard sheets, their language of illusion and optical trickery, are unmasked: I cannot find my way through to an image, meant to be observed from a distance while driving through a landscape or city. The found billboard sheet, the patterning of which Fowler re-imagines in an unlikely semi-replica, is not intended for the intimacy of an interior.

This is materially complex work to be slowly and carefully contemplated, important aspects of the artwork that Maria Stenfors exhibits. Fowler’s practice asks questions about sculpture, the nature of objects, and their relationships to how it is we navigate space through vision, movement and the subjectivities we inhabit and perform.

Lilah Fowler: Passage and pair through to 9 November 2013 www.mariastenfors.com 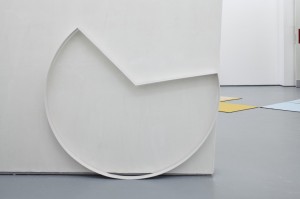