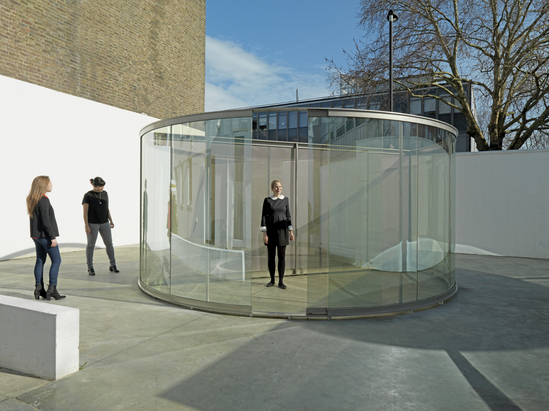 17th – 20th October 2013
The Lisson Gallery is presenting two solo exhibitions at the autumn fairs in London. Dan Graham is producing a newly commissioned freestanding pavilion for Frieze London, replacing the internal booth structure with a spiral of steel and glass. Over the last 30 years, Graham’s pavilions have acted as architectural interventions, minimalist meeting points, as well as proposing new facades for museums or domestic homes. Simultaneously reflective and transparent, they recall his earlier video installations of the 1970s that turned the camera back on the viewers, while also referencing office blocks and skyscrapers, classical auditoria, modern expo pavilions and Arcadian follies.

Graham not only represents the Lisson Gallery’s longstanding commitment to creating challenging contemporary art, but the inclusion of his pavilion at Frieze highlights the gallery’s involvement with many large-scale outdoor public commissions. Poised between sculpture and architecture, Graham has realized numerous glass and mirrored pavilions all over the world since the 1980s as prisms through which we view others and ourselves.
At Frieze Masters, Lisson presents a single-artist display of the work of Richard Long, who worked with the gallery in his seminal early years between 1973-1980. In his first presentation since re-joining the gallery earlier this year, he will show a historical range of work including a major stone floor piece, a text piece and a monumental mud wall work. Like Graham, Long is one of a group of artists shown by Nicholas Logsdail in the earliest years of the Lisson Gallery and his legacy as a pioneering conceptualist and one of the originators of the Land Art movement is especially relevant now, as evidenced by the recent re-staging of ‘When Attitudes Become Forms’ at the Fondazione Prada.

About Richard Long
Richard Long was born in 1945 in Bristol, England, where he currently lives and works. He has had major solo shows and retrospectives at Tate Britain, London (2009); the National Galleries of Scotland, Edinburgh (2007); San Francisco Museum of Modern Art (2006); Guggenheim Bilbao (2000); Kustverein Hannover (1999), National Museum of Modern Art, Kyoto (1996) and Musée d’Art Moderne de la Ville de Paris (1993). Long was invited to participate in documenta 5 and 7 in Kassel and at the Venice Biennale in 1976, when he represented Britain, and again in 1980. In 1989 he was awarded the Turner Prize, for which he was shortlisted four times and he was elected as a Royal Academician in 2001.