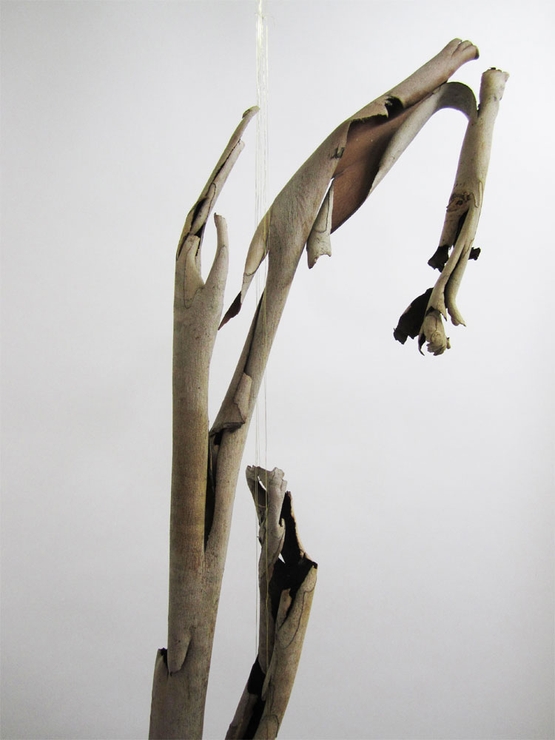 Young London 2013 is the third in V22’s series of annual exhibitions which present a snapshot of emerging cultural and artistic attitudes and trends in London as perceived by a new generation of young artists.

Ahead of the opening of the Exhibition FAD will be running Q&A’s with a selection of the artists exhibiting up first is Hannah Lees.

1.Can you tell us more about your work and what are the main ideas you would like to express?
My work is motivated by investigating ideas of cycles and the potential for new beginnings, this constancy, be it in religion or in organic matter, is visible in my practice through my attempts to make sense of and recognise traces of life. Mortality is also an aspect of my practice; in the sense that everything will eventually come to an end, emphasizing the idea of uncertainty and accumulation leading to collapse, through appreciating this, my work is focused towards an understanding of the essential nature of the materials I use.

2. How do you start the process of making work?
Sometimes it starts with finding a material I want to work with, sometimes it’s from something I’ve read, it may be a quote that goes-on to be a title, or a new insight into something I was already thinking about. It’s usually pretty obvious which medium I need to use for what research outcome and I am also open to experimenting with a new material if I feel previous mediums won’t work.

3. Do you consider the viewer, when making your work?
I have been using my line of research as a problem to work towards finding not so much answers but clues to a way to understand a system and to attempt to pair down ideas and imagery to become a sensory feeling in order to consider life. In this way I think, ultimately, I am always thinking about interpretations but also the possibility for multiple interpretations within the work, I like to leave space for the viewer to bring aspects of their own personal histories, culture and knowledge.

6. What defines something as a work of art?

“The earliest experience of art must have been that it was incantatory, magical; art was an instrument of ritual. (Cf. the paintings in the caves at Lascaux, Altamira, Niaux, La Pasiega, etc.) The earliest theory of art, that of the Greek philosophers, proposed that art was mimesis, imitation of reality.”

7. Anytime, any place – which artist’s body would you most like to inhabit?
Sophie Taeuber-Arp
8. What was the most intelligent thing that someone said or wrote about your work?
The things that stay with me are the things that tutors said, without naming names:
“Leave space in your work both physically and for the viewer, don’t be too didactic.”

10. Do you care what your art costs? State your reasons!

“Equally good is the answer given by the person, whoever it was (his identity is uncertain), who when asked what was the object of all the trouble he took over a piece of craftsmanship when it would never reach more than a very few people, replied: ‘A few is enough for me; so is one; and so is none.’”

11. What’s next for you?
Residency with Artistes en Residence in Clermont Ferrand, France www.artistesenresidence.fr

Young London 2013 is the third in V22’s series of annual exhibitions which present a snapshot of emerging cultural and artistic attitudes and trends in London as perceived by a new generation of young artists.