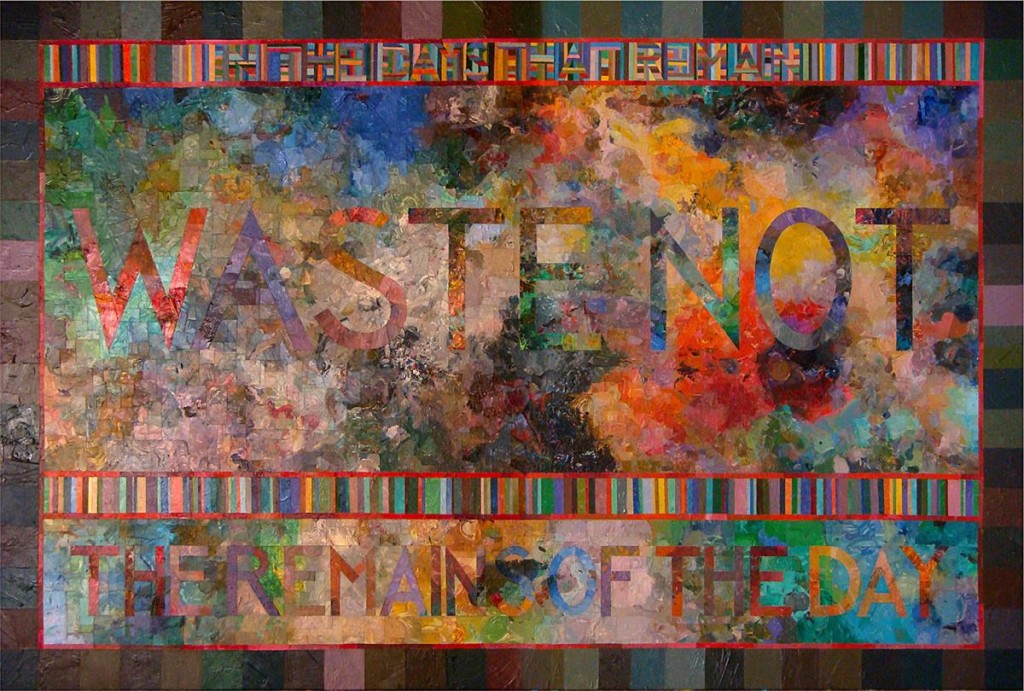 ??This exhibition by leading British artist Tom Phillips consists of an entirely new body of work. With extraordinary delicacy Phillips has dissected his previously used, discarded plastic palettes and converted fragments of them into intricate oil collages mounted on panels.

Throughout Phillips’ broad practice he has been drawn to materials, texts and images, often those that appeared unloved, (hair, mud etc.) and reconfigured them into artworks, aiming as he says ‘to be the complete recycler’. This body of works continues this preoccupation, originating in a series started in 1969 called Terminal Greys, which form a border to some of the new paintings.

Although the nature of this process is improvisatory, the suggestive forms that are composed have been carefully orchestrated. In The Screens the cuttings are transformed into a collage reminiscent both of a stained glass window and an old master landscape. Here Phillips is working with an unprecedented collage technique via minute palette mixings of jewel like colours. These tiny fragments have been caught in resin then through the application of varnish have been unified to construct complex images.The collages’ textured surfaces catch the light giving the artwork the appearance of being illuminated enticing the viewer to look closer and into the artwork.

This unique process conjures up both abstract and figurative works, some strictly linear referring to musical staves, others more ambiguous reflecting classical images or resembling storyboards for operas such as Wagner’s Ring or more personally, his own Humument based opera, Irma.

About The Artist
Born in London in 1937,Tom Phillips attended St. Catherine’s College, Oxford and Camberwell School of Art. He was elected to the Royal Academy of Arts in 1989 and was Chairman of the Royal Academy’s Exhibitions Committee from 1995 to 2007. He has had retrospective exhibitions at the National Portrait Gallery, London; The Royal Academy, London; The Victoria and Albert Museum, London; and The Yale Center for British Art, New Haven. A prominent figure in contemporary music, art, film, stage design, literature and criticism, Phillips is known for his pioneering explorations of word and image and his forty-year long Humument project, exhibited in part at Flowers in 2005 and in 2007 at the Dean Gallery, National Galleries of Scotland, Edinburgh. He is also currently exhibiting atThe Massachusetts Museum of contemporary art showing the first version of A Humument completed in 1973 as well as a substantial selection of the revised edition, still in progress. This spectacular display contains 1,000 individual book pages