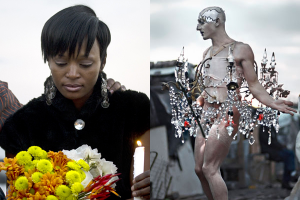 Steven Cohen and Zanele Muholi are two of South Africa’s most prominent artists working at the intersection of art and politics. Going South: Queer Cartographies in Post-Apartheid South Africa is an evening of film and video that explores how these artists have utilised the moving image medium to take on questions, the relevance of which, extend far beyond the borders of South Africa. This year, in the UK  (and the northern hemisphere more generally) debates about same-sex marriage, homophobia and violence related to gender and sexuality, has dominated political life and the media. In South Africa same-sex marriage was legislated on the 30th November 2006, making it the first country in the Southern Hemisphere to do so, and the fifth internationally. Despite the advances of legislation, same-sex relationships are subject to endemic violence, prejudice and homophobia. Lesbian women in South Africa have been subjected to forms of violence that include so-called ‘corrective rape’.

The ICA screening places video works by Muholi and Cohen in dialogue for the first time: Muholi’s Difficult Love (2010), and Being Scene (2012); and Cohen’s Voting (1999/ 2010), Chandelier (2001), and Cradle of Humankind (2012). The approaches of these artists (and the visual strategies they deploy) produce different questions about the ways in which queer space in South Africa might be imagined. Muholi’s film practices draw on the language of documentary, a visual form that is well-established in South Africa. She builds on her substantial work as a photographer, and activist, and is well-known for what she calls her ‘visual activism’, and her documentary-style photographic portrayals of lesbian life, desire and love. Cohen’s performances stage public interventions, often in unlikely places. These centre on his own body which he transforms by fantastical, and physically inhibiting costumes that draw on historical practices that include queer performance.  Cohen also mobilises his personal relationship to identity in South Africa, exploding the strictures of what it means historically to be gay, white and Jewish in that country. Both artists negotiate the politics of visibility and invisibility, and foreground the stakes and the risks attached to everyday life, visibility and movement as a person who identifies as queer or as part of LGBT communities.

Both Muholi (b.1972) and Cohen (b.1962) have exhibited widely in South Africa and abroad. Muholi is an acclaimed social activist, photographer and artist. She won the Index on Censorship – Freedom of Expression art award in London in March this year.  Her Faces and Phases series is included on the South African Pavilion at the 55th Venice Biennale, titled Imaginary Fact: South African art and the archive (closes 24 November 2013). Current group exhibitions include Distance and Desire: Encounters with the African Archive, at the Walther Collection in Ulm Germany (curated by Tamar Garb).  Muholi has been selected for the 2013 Carnegie International survey of contemporary  art, opening 4 October 2013. Both artists are currently participating in the group show My Joburg at La Maison Rouge, Paris (until 22 September). Cohen is giving performance-tours alongside the show, under the title Sphincterography the Tour, as part of the Festival d’Automne. He is now based in Lille, France and is arguably the first South African artist to work in radical ways with the body and the medium of live performance.  His work has been presented in both institutional and public spaces around the world including the Centre Pompidou, the South African National Gallery (Cape Town) and the 11th Havana Biennale (2012). Both artists are represented by Stevenson (Johannesburg and Cape Town) www.stevenson.info.

This screening introduces a conversation about Cohen and Muholi’s work proposing to expand discussions about how gender identity and sexual preference is charted not only in South Africa but also globally. Following the screening there will be a discussion held in the ICA Studio led by Professor Tamar Garb and Dr Liese van der Watt:

Tamar Garb is Durning Lawrence Professor in the History of Art at UCL. In April 2011, her exhibition Figures and Fictions: Contemporary South African Photography opened at the Victoria & Albert Museum, and Garb was subsequently  nominated for a Lucie award in Curating.  She is currently curating a series of exhibitions for the Walther Foundation, New York and Germany,  entitled Distance and Desire: Encounters with the African Archive and is a Leverhulme Research Fellow for 2012-2014.

Liese van der Watt is an independent art historian and writer based in London.  The author of numerous articles, catalogue essays and art reviews, her teaching and research interests are mostly in the field of contemporary African and especially South African art. Van der Watt’s writing projects consider race, identity and representation in contemporary art and are a continuation of her doctoral research that focused on whiteness in post-apartheid South African visual culture.  Until 2007 she was a senior lecturer in the Department of Historical Studies at the University of Cape Town where she taught Art History and Visual Culture.

This event has been initiated by South African contemporary artist, and MAFA student at Goldsmiths College, Abri de Swardt.