About Anne Pigalle
Like Edith Piaf , The Last Chanteuse grew up at the back of Montmartre in Paris, France. Her teenage years were spent playing guitar in an all girls punk band and watching films. 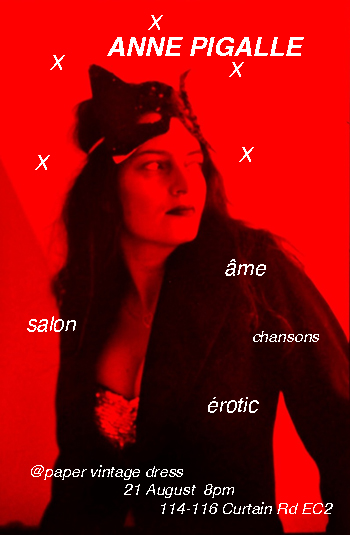 Anne Pigalle moved to London, recorded with Michael Nyman and Adrian Sherwood and then went on to sign a recording contract with Trevor Horn’s record label ZTT, with whom she recorded an album and a few singles. Hailed as the QUEEN OF BOHEMIA, she went on to tour Europe and Japan. Her self styled photo in 1985 in front of the red velvet curtain has become iconic.

2013, an interlude album : Madame Sex : Anne paints each cover individually, she calls it the Art Cd, The Art of Sex – THIS is a SALON PERFORMANCE with AMEROTIC POETRY and SONGS, in association with Paper Dress Vintage, to celebrate the new Cd MADAME SEX -£6 in advance – £8 at the door -BAR available August 21st – 7.30 -11pm @ Paper Dress Vintage Curtain Rd 114 -116 LONDON EC2 TICKETS available HERE 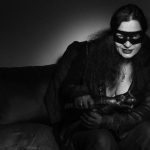 Soho was London’s daring and dirty soul, the place for free spirits to dispel the drab world beyond it, drink, or even dip into sex and sleaze.