VC had this thought, Is there a correct way to review art ? I mean do you need a beginning, middle and an end? Do you need to like or dislike the work, is it ok to be negative? (doesn’t seem to be ) What is art anyway? So,  how can we look into this?
Well, below VC and Tabish review the same show exposing two completely different interpretations while simultaneously attempting to answer some of the above questions.

What do You Think? Fancy Having a Go? Just leave a message at the end of this post.
Let us begin.

Allow me to first set the scene, or paint the picture if you will. Currently on view at the Simon Oldfield gallery, 94 Mount Street Mayfair, is a group show titled, ‘Portrait of a Life Half Known’ featuring the works of four slightly different, half known artists: Kay Harwood, Juno Calypso, Simon Foxall and Ryan Leigh. When I first read the press release, I immediately fell into torturous past memories of dark uni lecture halls. Where haunting flashbacks from my days studying art history slowly crept their way back into my present mind. Endless days and endless nights, forced to feast eyes, ears and perceptions upon portraits of kings and queens, peasants and slaves, dogs and birds, tyrants and their servants, portraits of the artists themselves, portraits of their wives and mistresses, portraits of their children, portraits of portraits re-interpreted- the slides were never ending! At the ripe age of 22, I was inevitably led to the final and unchangeable conclusion that people, especially artists, are completely narcissistic and that all of this s&*t is the same! However, this unshakable conclusion only made my love for the art world even stronger, and of course- the love for myself. As I revel in opportunities of finding something new and interesting to critique and observe, meeting people who are unique and ubiquitous and, of course- using my own narcissistic voice to write about it. 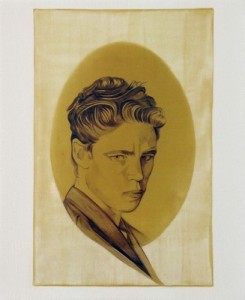 On this note, back to yet another gallant evening parading the shimmering West London summer streets. On this particular sun filled late afternoon, I convinced myself to go to this ‘Half-known’ show for three reasons: Number 1. Mark wanted me to review it. Number 2. it was the private view, so I knew there would be heads, feet, and voices dancing, bobbing, and fluttering around the pieces- taking the yawning show of portraiture to a whole new level. Number 3. From a curatorial perspective it is entirely invigorating to see how group a show is curated. This skill a curator obtains: to incorporate similar, yet individual, minds, techniques and voices of artists from various backgrounds in a setting which synthesizes all of these interesting, intertwining elements and metaphorical conversations, is a skill I not only personally admire, but it is also one of the main reasons why the contemporary art world continues to stay afloat- through the strength, intelligence and agility of collaboration. 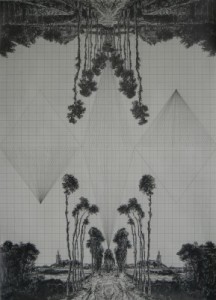 Walking up the stairs to the second floor of this quintessential Mayfair building, Mark and I were bombarded with groups of people of all shapes and sizes, sticky heat, hardwood floors, white walls and multiple corridors and dimensions alluding to an Alice in Wonderland theme in which many more layers were to unfold. With a cold beer in hand,  I was intrigued -and couldn’t stop from taking myself out of the role as the aerial view observer. I don’t know about you- but my imagination takes off in instances such as these. Something becomes terribly mystifying and extremely poetic within rooms, where a silent portrait hangs like a bug on the wall amidst clever conversation, loud chuckles, good vibes, free drinks and sunshine! I am usually always left wondering what the locked- in, framed subjects are thinking. Maybe, ‘why hasn’t anyone offered me a drink? Why are they so loud? Do they like my pink top? or What are YOU looking at!?’

Enter: Tabish. Highly aware of his ‘top 5 gallery picks‘ which he publishes every Monday on FAD, I could already assume from his gallery/show choices and from his bleak yet concise observations, that we had a completely different way of viewing art and even more so- of writing about it.

Tabish is solemn, timid, intelligent and thinks very long before he speaks, much less writes. I, on the other hand, naturally endowed with an American twang and booming gestures, speak loudly, laugh loudly, and write loudly! As different as we may seem, our oppositions inevitably led to curiosity and we immediately joined forces and began to embrace what the show had to offer. First up: Juno Calypso’s room. He told me on instant that he came to this show ‘specifically to see her work‘ Ha. I had never even heard of her ! And, as he was going on about her technique, skill, yada, yada, yada , all I could think about was whether or not the girl in the pink top situated in the background of this techincally ‘advanced’ photograph was aroused, or suddenly stimulated by the man having a conversation by HER couch? I may or may not have a dirty mind when it comes to art- after all is art, or is it not an interpretation of culture? 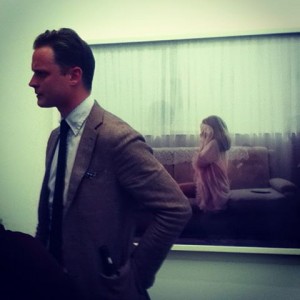 He then asked, ‘So what do you think, who is your favourite?‘ I responded with the fact that I did not even know who these artists were before I walked in (besides reading their names a week earlier on the press release) and that it was extremely difficult for me to zoom in on one artists work before I quickly zoom back out. In order to comprehend the overall conversation between all of the artists, the space, and the people who think twice to consider it, I had to first see it all in from an aerial perspective. It is quite enjoyable to walk into a show knowing NOTHING, especially a group show, where knowing too much can dominate a genuine and initial outlook.  It was refreshing to allow the works to speak to you, as oppose to MAKING the exhibition obtain some sort of theoretical meaning.

For Tabish, it is the oppposite. He is involved with almost everything scientific and is both enamoured and enticed by dissection and biology- ah ha! Hence the reason for his ability to quickly capture what he thinks is worth while and to accuratetley tune out all of the nonsense. I know that I tend to be too boistrous, opininated, and over think the whole shebang- missing the details and fine tuned points! So, I l am loving the fact that he can look at something and say- this is that, that is this- Done. After our conversation, while leaning on this same wall where we first met (where I was secretly convinced that another one of Calypso’s subject was spying on our rants) we then decided we need to battle our thoughts out on FAD- And for reasons that are both greater than him and I.

The question that both Tabish and I would like to pose is in fact: Is there a CORRECT way of looking at art, viewing art, talking about art, or WRITING about art?

We went our separate ways and decided to do our own review of what we gathered from the show a week later on FAD. 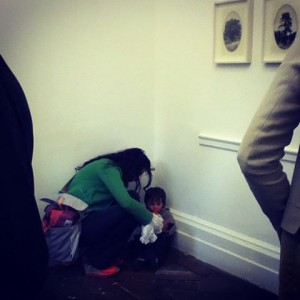 How do tiny humans belong in shows? Do they fit in- or fit out? Are you tiny or big? 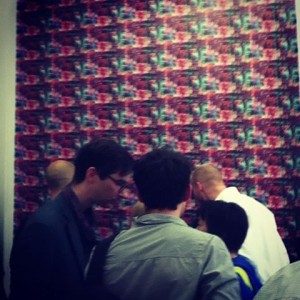 Repeated heads and shapes. A heavier nod to the repetition within the piece, only when there are repeated foreheads crowded around- for me at least. 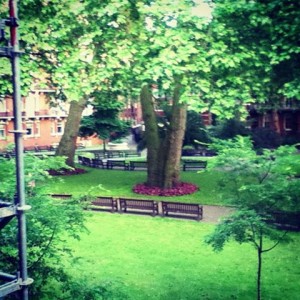 A view of the Garden from the window- oh how the sun makes such a difference at an art show opening! 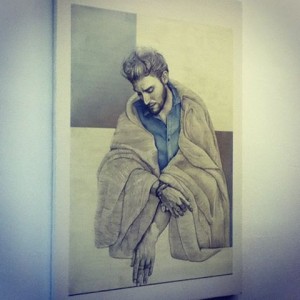 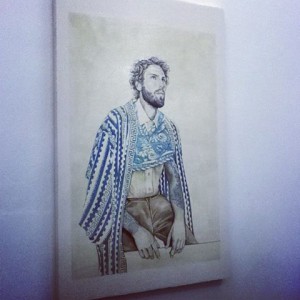 But he has a friend! 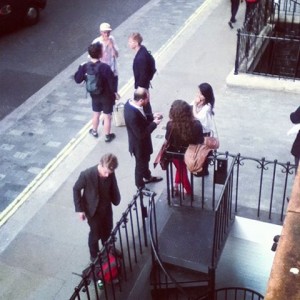 People down below who probably have loads of fabulous other things they could be doing in Mayfair. Aka they don’t have to hang out in frames all day. 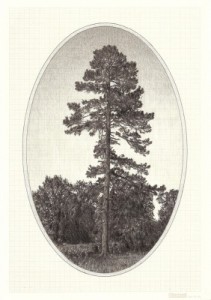 hmm…maybe this lonely tree wants to be colourful and in the garden outside the gallery with the rest? 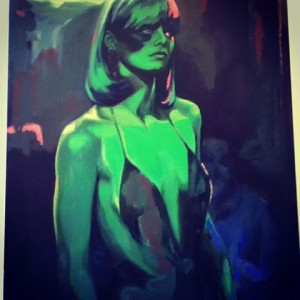 She is so flashy and green! The hulk’s wife? 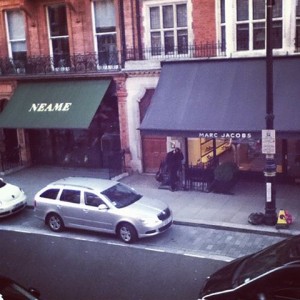 Can you spot him? Creepy guy with duffelbag captured from gallery window. Wonder how he would want his portrait rendered?

So Here it is ladies and gents. A glimpse into the mind of VC and I, like the rest of you, cannot wait to see what Tabish has come up with

Although it seems a bit all over the place (just from my own interpretation)- it is very much a show worth checking out. And I must say I was incredibly impressed with the artists and the Simon Oldfield gallery

Portrait of Life Half Known @ Simon Oldfield through the eyes of Tabish Khan
There are three things that make for a good group show: high quality art, a central theme and how the works hang together. It’s completing this golden triangle that all galleries seek to do when putting on a group show, but has Simon Oldfield gallery succeeded with their latest exhibition?

We have four artists on display all taking portraiture in different directions, exploring the nature of portraits and what can be conveyed with a non-traditional painting, drawing or photograph. I’ll examine each artist in turn before returning to assess the exhibition as a whole.

Juno Calypso is an artist we spotted first at this gallery and her latest set of photographs are those that featured in the Caitlin art prize finalists’ exhibition. I like her anti-portraits where her face is hidden and she takes on the guise of her alter-ego – Joyce. The settings appear perfect but her stance hints at a hidden tension within each work that the viewer isn’t privy to. I think her photographs make her the strongest artist on display here.

Simon Foxall has two sets of work on display. A giant segment of wallpaper covering the gallery wall is his strongest piece as recognisable landmarks appear through the semi-abstract brightly coloured foreground. His portraits are a mixed bag, the use of deep and bright colour where only humanoid forms are visible are effective but when realism enters his work as with the giant green woman, they gain a comic book feel that decreases their presence.

Kay Harwood takes traditional portraits and adds touches of colour to bring out certain aspects of her male muses, whether it’s the blue in their eyes or the chequered pattern of his scarf. The technique is effective and can be arresting but it feels too safe to stand out in this exhibition that’s meant to be a new take on portraiture.

Ryan Leigh exhibits some traditional landscapes but the focus in on his drawings of trees. By placing them within an oval, which is traditionally reserved for portraits, he attempts to give them an added sense of life and personality. This didn’t work for me and I saw them as nature research drawings rather than pseudo-portraits.

The gallery layout affords each artist a closed off section. By not hanging works side by side, it feels more like four mini exhibitions rather than a group show. This is by no means a bad thing but I’ve assessed each artist individually because of this. As you leave one room and enter another, the slate wipes clean and each artist is left to stand on their own rather than as a group.

The central theme is strong and I recommend a visit but it’s Calypso’s work that is truest to this theme and was my top pick for this exhibition with Foxall also deserving some praise for his work.

6 thoughts on “Review: ‘Portrait of a Life Half Known’ @SimonOldfield : Is There a Correct Way to Look @ Art? VC and Tabish Battle it out!”