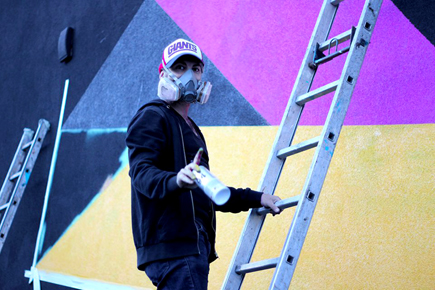 1.If you weren’t an artist, what else would you be?
I would probably be a racing driver. I love fast cars and I could happily race cars for a living…

2. Can you tell us more about your work and what are the main ideas you would like to express?
My work is largely about tension and balance, both of colour and form. Having spent most of my life as a graffiti artist, I utilise the shapes, forms, patterns and colours from that era and reinterpret them into more aerodynamic paintings. Graffiti art is filled with unnecessary additives and traditions. My paintings are as much about the rebellion within that movement as they are the rebellion outside of it.

3. How do you start the process of making work?
I usually start with drawings, I sketch constantly and re-reference sketches all the time. When I start the painting, it rarely follows a parallel with the sketch it goes wherever it takes me.

4. Do you consider the viewer, when making your work?
Never… I have only painted a couple of private commissions for clients who have expressed a preference to a particular palette or style, it rarely works, so for that reason I don’t do it anymore.

5. Name 3 artists that have inspired your work.
So many artists have inspired me through different stages of my career but I guess 3 key artists who I inspire me greatly would be Futura (Lenny McGurr), Kazimir Malevich and Theo Van Doesburg.

6. What defines something as a work of art?
Somebody loving that object with an uncontested passion.

7. Anytime, any place – which artist’s body would you most like to inhabit?
Not really sure I’d want to inhabit any other artist’s body to be honest… I think I’m quite happy in my own.

8. What was the most intelligent thing that someone said or wrote about your work?
“Remi is that rare breed of artist whose work you can equally enjoy in an outdoor setting and also in a gallery/home without it feeling awkward and out of context.”
Sven Davis (Arrested Motion).

9. Which artists would you most like to rip off, sorry, I mean appropriate as a critique of originality and authorship?
I’d love to rip off Kaws. I really like his sense of colour and the huge installations he makes. He’s a fantastic example of an artist as a brand, but in a successful and intelligent fashion. I also think it would be interesting to re-appropriate his work as a lot of his work is re-appropriated from cartoons and popular culture. I wonder if he’d be flattered and enjoy it or be upset by it?

10. Do you care what your art costs? State your reasons!
Not at all… A great friend and artist once said to me; “Never get bogged down in what art costs… The price is the price!”

11. What’s next for you?
I am about to release my new book #roughsketches It’s a 124 page collection of sketches and drawings from 1996 to 2013. It charts a progression from graffiti through to abstraction and you can see the gradual development of that journey too.

I also have a mural project in Detroit for the Autumn and an exhibition planned for later this year with Scream Editions and artist Shok-1, which we’re still working on at the moment.

Lastly I’m going to Miami for Art Basel week in December which I’m really looking forward to as I missed last year due to other commitments.