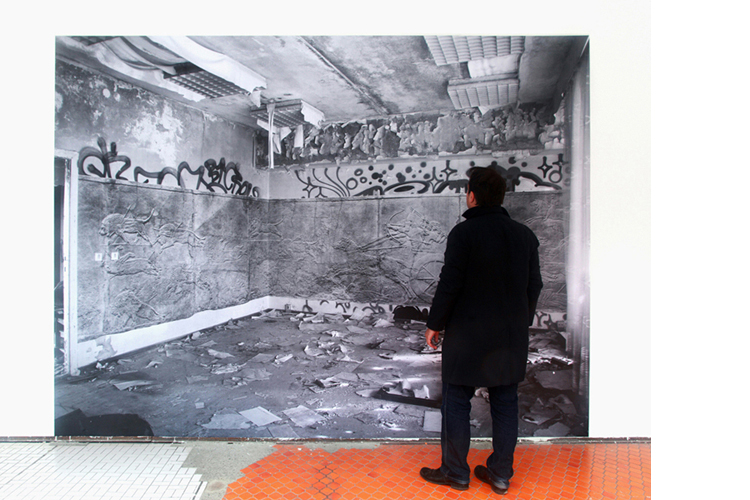 1.If you weren’t an artist, what else would you be?
I would be breeding phoenix palms.

2. Can you tell us more about your work and what are the main ideas you would like to express?
As a punch line – Value, power and authority are collective constructions that must be continuously questioned, broken down and reappropriated.

3. How do you start the process of making work?
In the beginning of a new project I collect information, places and objects. I would say my process is modular, where I have a number of interests, obsessions and art pieces on rotation that I continuously rearrange and explore.
Concerning the eventual materialization of objects and images I usually develop a specific visualisation that is then directly executed. In my case the “artistic process” happens during the phase of conception, not execution.

4. Do you consider the viewer, when making your work?
In my installative work I focus a lot on constructing displays, so my exhibitions always address the act of viewing.

5. Name 3 artists that have inspired your work.
At different points the work of artists Marcel Broodthaers, Elaine Sturtevant and architect Denys Lasdun were important to me. Also during my early art studies I would look a lot at Bauhaus, the Russian modernists and structural film. Lately I have been interested in the work of Slavs and Tatars and Wael Shawky.

6. What defines something as a work of art?
Discussion

7. Anytime, any place – which artist’s body would you most like to inhabit?
Semiramis when she was building Babylon.

8. What was the most intelligent thing that someone said or wrote about your work?
In 2006 my friend and artist colleague Nina Hoffmann wrote a review on a solo show I did in Berlin, the title of the text is still stuck in my head – “Gold fremder Wüsten” (translates to “Foreign Deserts´ Gold”). The title to me still summarizes precisely the combination of guilty pleasure, desire and escapism that I aim to give space within the strict structural composition and construction of my installations.

9. Which artists would you most like to rip off, sorry, I mean appropriate as a critique of originality and authorship?
I am currently occupied with redirecting and retraining myself with who and what I give attention to. Commenting within my work on artistic positions that I disagree with potentially leads to affirmation rather then critique. I think as a cultural producer one´s personal space of attention has become a core capital, that we need to utilize consciously. I cannot say I have completely succeeded with this but I am working on it.

10. Do you care what your art costs? State your reasons!
The trigger for this interview is that I just received an independent and self-organized art prize for “unestablished” artists in Berlin, that summarizes the topic quite well. In Berlin the discussions currently, as well as historically, focus on emancipating or at least diversifying the means of cultural production from the neo-feudal horrors of exclusivistic luxury economy.

About The Prize
The Berlin Art Prize is a newly established independent award annually honoring contemporary art from Berlin.
On June 22nd, 2013 the Berlin Art Prize was awarded for the first time. Founded by contributors to Berlin’s arts and culture scene, the objective of the prize is to support the creative endeavors of Berlin-based artists. Four winners, selected by an independent jury of art professionals, where awarded with an exhibition, representation in a catalog, prize money and a two-week resi- dency in a villa in San Martino, Italy. An additional 20 shortlisted artists will be presented in the exhibition and catalog.