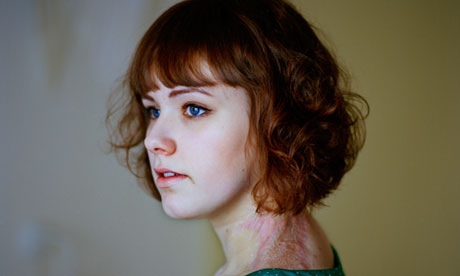 Andrea Gjestvang has won the L’Iris d’Or at the 2013 Sony world photography awards.

The 32-year-old Norwegian photographer beat over 62,000 competitors from 170 countries in the professional competition with One Day in History, her poignant series of portraits of the young survivors of the massacre on the Norwegian island of Utøya on 22 July 2011.

On that day, 69 young people who were attending a summer camp organised by the ruling Norwegian Labour party were killed by a lone gunman, Anders Behring Breivik, a 32-year-old rightwing extremist. Around 500 young people survived the massacre.

The series was commended by the judges for its “dignity and beauty” and described as “a quiet, thoughtful and ultimately powerful voice for the children and survivors of the massacre in Norway”. Gjestvang’s portraits have already been collected in a book, published in Norway in 2012. They are tender but unflinching images of survivors, many of whom were physically wounded by the event.

In one image we see the outstretched arm of a young girl. Her wrist bears the tattooed inscription “One week last summer”, and part of her little finger is missing. Some of Gjestvang’s subjects are more dramatically scarred; all seem subdued and a little withdrawn.

One survivor, Ylva Helen Schwenke, aged 15, writes: “I carry my scars with dignity, because I got them for something I believe in. It’s my attitude in life, it keeps me standing. This is how things are, and I have to deal with it. It helps no one if I sink into depression, least of all myself, so I keep my head up and focus on the good things in life.” Another girl, Cathrine Gjerdingen Larsen, aged17, swam away from the gunshots and was rescued by volunteers in a boat. She writes: “I wear a mask. I wear a mask in school and among friends. I smile and am happy. I’m laughing and joking. Many times it’s straight from the heart. But often, too often, it is forced out.”

On her website, Gjestvang says: “In Norway, 22 July 2011 has etched itself into the collective and private memory forever.” Her portraits convey that shared weight of suffering but they are also a moving portrayal of enduring hope. They remind us how powerful a beautifully composed portrait can be in an age of digital post-production.

The 2013 Kraszna-Krausz book awards, also announced at the Sony world photography awards ceremony, had a clear winner – War/Photography: Images of Armed Conflict and Its Aftermath by Anne Wilkes Tucker, Will Michels and Natalie Zelt. The catalogue for the touring exhibition of the same name, which opened at the Museum of Fine Arts in Houston last year, is a work of deep scholarship and extraordinary range. As one of three judges of the prize, alongside curator Zelda Cheatle and photographer Paul Graham, I can attest to the unanimity of the verdict. More difficult was selecting 10 titles for the “highly commended” section and three for the final shortlist. Alongside War/Photography, we decided on Billy Monk by Billy Monk and Everything Was Moving, edited by Kate Bush. (You can read my thoughts on them here and here.) The last was slightly problematic for me as I had contributed two essays to the Barbican catalogue, so I took a back seat. The other two judges were effusive in their praise for both the show and the catalogue, so it won through.

There was much debate about Chris Killip’s Arbeit/Work, On the Mines by David Goldblatt and Uncle Charlie by Marc Asnin, all of which could easily have made the final three. As is always the case with prizes, there was some heartbreak and a residue of guilt afterwards, but it’s a great and varied top 10. (A word for Algeria by Dirk Alvermann which, although published by Steidl, is not your usual high-end production but a rather small, humble book by an overlooked photographer on an overlooked subject. I recommend it highly.)

I’ll leave the last word to the chair of the judges, Zelda Cheatle: “Our shortlist covers contemporary work, exhibition catalogues, a beautiful little paperback, turn of the century discoveries. Every book was thought about, mulled over and the agonising process of elimination or inclusion enacted. So many of the books were magnificent; 10 is a very short shortlist. We were glad to include Sarah Angelina Acland and her (unknown) spectacular colour, Marc Asnin’s Uncle Charlie with its 30 years of work and Chris Killip – which were all discussed at length.”

• War/Photography: Images of Armed Conflict and Its Aftermath by Anne Wilkes Tucker, Will Michels and Natalie Zelt (Yale University Press)

• Everything Was Moving: Photography from the 60s and 70s, edited by Kate Bush (Barbican Art Gallery)
• Billy Monk by Billy Monk (Dewi Lewis)