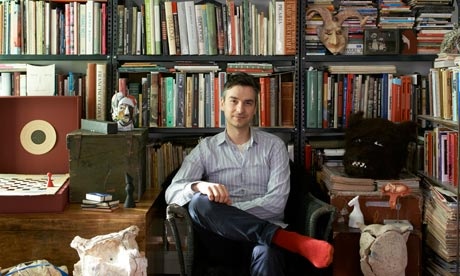 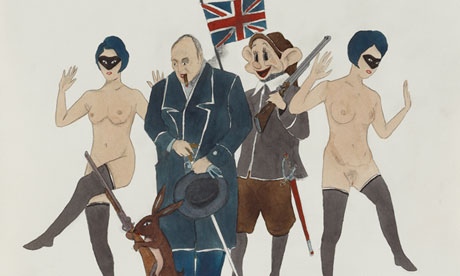 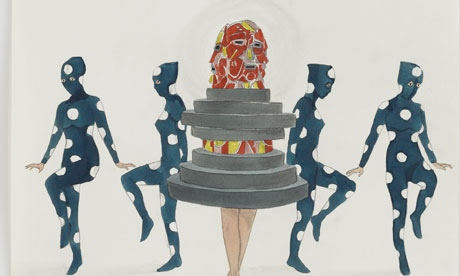 This article titled “Cult artist Marcel Dzama: ‘I try not to censor myself'” was written by Hermione Hoby, for The Guardian on Tuesday 2nd April 2013 17.00 UTC

Dzama works from the second floor of his Brooklyn home in a small, square room stacked with books, records and battered little suitcases filled with clippings from Life magazine. Now 39, he’s a bit of a cult figure: he’s designed album covers for Beck, been championed by Dave Eggers and Spike Jonze, and is collected by Brad Pitt and Gus Van Sant. Nonetheless, he still has the demeanour of a small, shy boy. His softly spoken sentences tend to peter off into a timid giggle, and he’s wearing thick, fawn-coloured socks that make his feet paw-like. There’s a bear suit draped over the banisters (it crops up a lot in his videos) and I suspect he might feel more at ease wearing it.

Dzama, whose first London show in five years is about to open at the David Zwirner gallery, grew up in Winnipeg, Canada, a remote town he describes as ghostly, particularly during the long winters when everything is silenced by three feet of snow. His mother was 17 when she had him, and his father got his son’s name off a locker at the bakery where he worked. Dzama is dyslexic and had a rough time at school, where he sketched incessantly. Teachers, he says, were constantly snatching away his drawings in lessons.

He went on to study art at the University of Manitoba, where he founded The Royal Art Lodge, a collective one member described as “a mysterious yet socially OK’d therapy group for mildly socially dysfunctional, highly imaginative people who liked to draw”. Dzama laughs at the description. “Yeah,” he nods. “All of us were socially awkward – when we did get together and weren’t drawing, it was a disaster. We’d try to have a party but it was terrible.”

A year after graduating, he had his first solo show at Los Angeles’s Richard Heller Gallery, and was hailed as a major new talent. Both Jim Carrey and Nicolas Cage bought work. Dzama responded by applying for a job at Walmart and other such stores, just in case. “None of them wanted me,” he smiles.

In 2004, he and his wife, artist Shelley Dick, relocated to New York. It was the first time Dzama had been away from home. “Just being from Winnipeg and coming to New York is like – woah!” The change was reflected in his work. Based on a drawing called You Gotta Make Room for the New Ones, a 2008 diorama (or 3D model) features a squadron of bowtied riflemen shooting down bats, birds and giant human heads; it looks like a formal killing-off of old characters. When big shifts happen in my life, explains Dzama, “I get rid of all the old ideas.”

There’s a certain logic behind some of his recurring figures. The cowboys, for instance. “That’s me trying to grasp whatever masculinity I had. I always drew them amputated because I felt not as macho.” And what about the bats? “The bats? The bats I just enjoyed.”

In 2011, when some of his dioramas showed at the David Zwirner gallery in New York, Dzama eavesdropped on some small children looking at them. “They seemed to really like them and not get too traumatised. That was really cute – it was a darkened room and I could hear them talk. They’d say, ‘Oh, look at the little bear!’ But it would be, like, a dead bear.” In the strained voice of a parent fibbing to mollify a child he adds: “He’s sleeping.”

Dzama draws every day and is still surprised by the darkness of his imagination. “I try not to censor myself at all. I’ll go, ‘Oh that’s nasty!’ But I’ll go with it.” He became a dad last year, though, and the life change shows in the new drawings included in Puppets, Pawns and Prophets, as his London is called. There’s a levity to them: more dancing, fewer guns.

Fatherhood, he says, “makes me try to look forward to the future more. Before, it felt like everyone I cared about was passing away. So having a child – it’s kind of corny – realised the whole cycle of life. And there was just so much violence this year in the news.” Previously, whenever Dzama featured gunplay in his work, although his attitude was one of disgust, he says “there was still something interesting in it to me”. After the shootings last year at Sandy Hook school in Connecticut and at the Aurora Movie Theatre in Colorado, “that totally disappeared, and it was just pure disgust after that”.

Dzama has proved immune to the digital revolution, resisting the zeal for new technology that really took off when he was still at art school. “Everyone was saying computers were going to be the future of art, everyone had to do something in this medium. And it was almost some sort of rebellion that I wanted to do these small, intimate drawings.” He looks around the room and laughs. “Yeah, I’m sitting in front of a whole shelf of records and books. I don’t go digital. I was never good with technology. I didn’t have a cellphone until I moved to New York. My gallery was like, ‘What? – how are we supposed to contact you?'”

So they bought him one – and these days, it rings rather a lot.