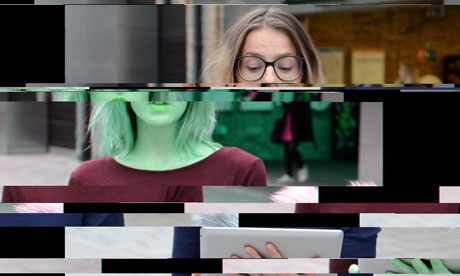 Back to the future … Still from This content was transmitted to this date in 1987, 2012

This article titled “Haroon Mirza’s unsettling TV transmission is ahead of its time” was written by Jonathan Jones, for theguardian.com on Tuesday 19th March 2013 13.19 UTC

The future has sent a message. A woman appears on a city street, speaking directly on camera to the people of the past. She outlines the political and economic problems of her time as objectively as she can, but then the image breaks up and deep rhythmic music starts up. As a circular light like a Dalek’s eye glows and pulses, the woman’s voice becomes a single repeated word: “history”.

“In the late 80s my sister and I were watching television and there was a strange interference with the regular broadcast. It seemed that Channel 4 was hijacked momentarily and we witnessed a pretty convincing transmission from the future. It could have been a hoax or an advert but it didn’t seem like either of these. It has always perplexed us.”

In fact, he and his sister were not the only ones to think they saw their TV set hijacked by a “transmission from the future”. Mirza cites a science fiction blog in which people recount just such experiences. These witnesses date the unexplained transmission some time between 1986 and 1992.

The fragmentary film Mirza has made for Channel 4 “is” the mystery transmission he claims to have seen – a piece of science fiction that is, for us, ordinary. Planes at an airport. Cars on a street. A presenter describing the economic anxieties of the 21st century. None of this looks futuristic because we’re here already, in the future. From the point of view in the past we are the futuroids, the sci-fi people, the hypothesis.

The woman in the broadcast says the future people have no desire to change history – but did they change it? In making that broadcast in 1987 did they sow a subtle seed that altered everything, like someone going back to the time of the dinosaurs and sneezing?

Perhaps the creation of Mirza’s short film is itself the alteration the broadcast from the future brought about. Or perhaps more clues to this temporal mystery will be revealed in his next exhibition at the Lisson Gallery in London (from 17 May). Or perhaps it is all a teaser for the new season of Doctor Who. At any rate, Haroon Mirza gave late-night TV viewers a recipe for vaguely uneasy dreams.