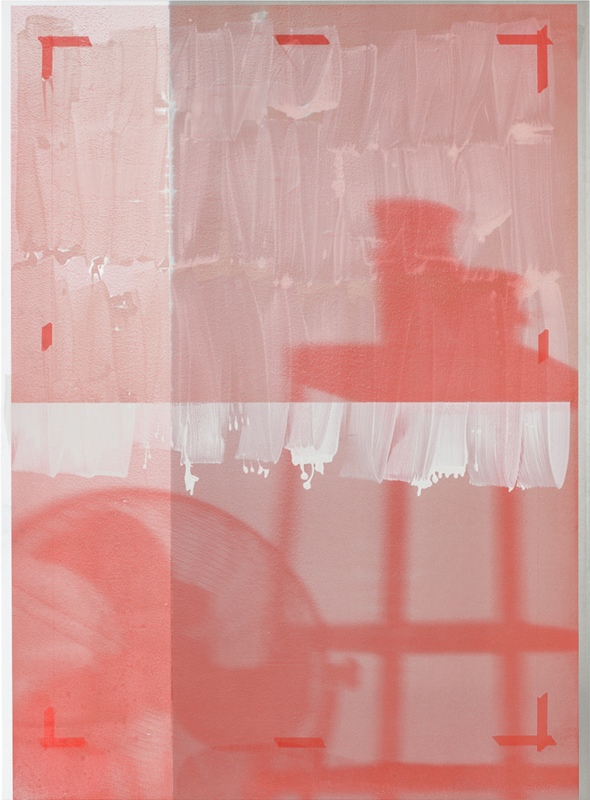 Go see a new suite of paintings on aluminum by Nathan Hylden, his third solo exhibition with the gallery. In keeping with recent work, Hylden repeats a section of his studio wall within each painting, over which shadows of a fan and stool move progressively to the right, spraying acrylic on top of them — or under them, depending on the order it was done. He intersperses this procession of silvery-grey paintings with red ones, shifting this visual metronome. When the shadows reach the far right of the picture, the inevitable denouement, an empty expanse of the gallery follows it as if it were a physical ellipse. This leads you back to where you started — or sends you in reverse.

The elliptical nature of these paintings has an effect on the speed of apprehension in the viewer, how it unfolds not only upon a singular piece, but on the body of work as Hylden builds it, whose beginnings and endings are at best provisional. Initially each work could be seen as a retread of abstract motifs, or at the other side of the spectrum, as a clear mechanical image of a wall, taped crop marks, and shadows. One mode of seeing becomes another interchangeably as your faculties plot the coordinates. This is not uncommon in viewing a painting, even at its most brazen, but as your eyes scan Hylden’s exhibition, bearing witness to the slight procedural differences between each work, noticing what is depicted as much as how they are painted, it becomes clear they are a singular organism. Or a tautology. Or a painted film. The last option predominates since the filmic and the clockwork of apprehension have a measure of anxiety built into them. They have a feeling of foreboding, even if what happens next is expected. During this unfolding of time and expectations, whose final picture is never accurate, Hylden finds crevices, glitches, and orders of technique that eventually, if taken hold, inform his next move, his next exhibition. The viewer cooperates in finding these chance effects as her eyes scan the room.

Here, Hylden’s active studio time merges with the viewer’s apprehension. They remain hovering simultaneously in the present. Here lies the tension: analysis tends to begin after production has been suspended, but here, the paintings appear to being made (or unmade) as you see them. This rests outside a common province in painting, where the body of work has stopped becoming itself upon arrival to the gallery. Maybe it’s even dead. Made within the painter’s allotted studio time, it is hermetically sealed from the viewer’s viewing time. Each painting tells its maker what to do until it is done, at which point the viewer may digest it. Because Hylden’s paintings act as literal ‘frames’ of his activities or inactivities in the studio, the work is becoming before your eyes; the usual bifurcations of space-time are thus suspended. He has one painting beget the other in a fluid motion. They are a “production of production” and they breathe together in unison. Yet, these paintings are less about the exhibition of Hylden’s process than about the tensions that arise when two strains of time become one, when watching and making a show are no longer strangers to each other and must coexist somehow.

But there lies another tension, that between the image and its support, and between image and device. Hylden has the image atomize across the seamlessness of its silvery substrate. Its silkscreened moiré patterns have a way of dispersing themselves up close before their trickiest work is done from afar. They act as a screen, through which the aluminum ground asserts its heavy materiality, even though it’s thin and hovers over the wall, pretending as if it were light. But it’s also Hylden’s gestural brush strokes and sections bathed in sprayed acrylic that interrupt the image from fully deploying its illusion, or behaving like a ‘window’ into the studio space. When the image is forefronted as a device, not as a space per se, the allures of illusion must live alongside its insides being exposed. This is further reiterated by Hylden altering the application of layers from one painting to the next, thus shifting the visibility of decisions and priorities. This also could be found in the red paintings: their color resembles the rubylith masks in Photoshop. In the digital world, that red symbolizes what parts of the image should remain, or depending on the settings, which should disappear. These movements are less about the symbolic realm than a reshuffling of the options, a shift into this direction or that, without knowing exactly what will happen. This disrupts what has to happen: the production of paintings, the filling of empty galleries, the making of images, and the movement of the lamp around the studio.

About The Artist
Nathan Hylden lives and works in Los Angeles. He studied at the Art Center in Pasadena, California. His works have been presented at Johann König, Berlin, Richard Telles Fine Art, Los Angeles, Misako & Rosen, Tokyo and Art:Concept, Paris, as well as in group exhibitions at Museum Boijmans Van Beuningen, Rotterdam, Midway Contemporary Art, Minneapolis, or Kunsthalle CCA Andratx, Mallorca. His first institutional solo exhibition will open this July at the Kunstverein, Hamburg.