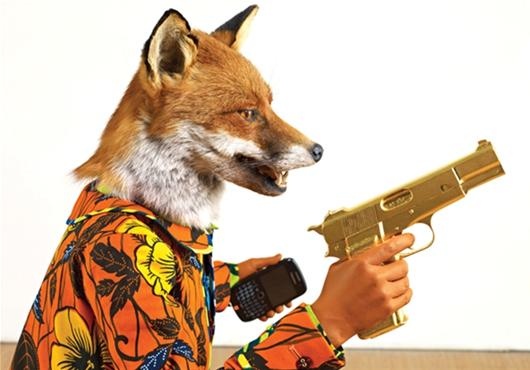 This article titled “How Yinka Shonibare’s sculpture park exhibition shoots to thrill” was written by Jonathan Jones, for The Guardian on Sunday 3rd March 2013 21.59 UTC

Yorkshire Sculpture Park is famed for its eloquent championing of local heroes Henry Moore and Barbara Hepworth – and for its sheepfolds. Rebuilt or refashioned in colourful stone by Andy Goldsworthy, these delicate pens pepper the hillsides. But wander YSP’s 500 acres, which today are crisp with frost, and you will soon find a walled hollow where deer were once taken for slaughter. Such discoveries provide an eerie echo of a very different time: the early 19th century, when this artificial landscape of rolling hills and silvery lakes was created as the pleasure ground of a wealthy landed family.

I may as well be honest: I find the park a bit worthy. I think Moore and Hepworth are ever so slightly, well, dull; and for all its bright, bold visitor centre, this place is just too much a temple of cultural reverence for my taste. But Yinka Shonibare has set it alight. The YSP, it turns out, is the perfect stage for this British-Nigerian artist who is fascinated by the strange legacies of Britain’s imperial past, when such vast estates were built on the backs of slaves and the plundering of the colonies.

In this spectacular exhibition, his largest yet, Shonibare’s art has never looked as serious, acute and sustained as it does when let loose among the planted cedars and firs of landscaped England. At the top of one hill, there’s an enormous, flamboyantly patterned sculpture of a hankie that could have fluttered out of a giant dandy’s pocket. Blazing with colour and frozen in mid-furl, it stands like a banner of defiance against the grey skies. Another hankie can be seen further down the manicured slopes, in a vista towards the woods. Both recall Shonibare’s 1998 series of staged photographs, The Diary of a Victorian Dandy, in which various suitably attired characters struck theatrical poses, as if starring in a rather over-the-top costume drama set in an old pile. Fabric-ation, as this show of new and recent work is called, feels similarly ironic and powerfully dramatic.

Indoors, beneath the beamed ceilings of the YSP’s galleries, are the Revolution Kids: animal-headed humans who dance madly, toting golden pistols that replicate the one Colonel Gaddafi owned. Shonibare’s first attempt at taxidermy, these insurrectionists are meant to be about the Arab Spring. But, overlooking a half-tame, half-wild English landscape where gentlefolk once rode to hounds, the armed foxes look like they’re here for revenge.

Shonibare, who was born in London but moved to Lagos when he was three before returning in time for his A-levels, doesn’t just dress history up in glad rags: he takes it on a wild dance and spatters it with raw eggs. He uses Dutch waxed fabrics to clad his mannequins, each one patterned in some crazy new design purchased readymade from the Netherlands, since he sees in their wacky hues a distilled history of imperialism. These vibrant patterns – which also provide the sails for his ships, most notably the re-creation of Nelson’s flagship HMS Victory that stood on Trafalgar Square’s fourth plinth – look African because they are worn and used in Africa. But, since the 1800s, they have been made in the Netherlands (and Manchester, actually) then shipped abroad. His mockery of myths about Africa continues in his pseudo-primitivist paintings studded with nails that resemble the rusty ones found in “fetish” sculptures from the Congo region. Yet his are painted lime green and bright blue, exorcising their spookiness. Or are the garish colours a disguise? Are there hidden powers concealed in these nails after all?

In his hilarious, unsettling installation Egg Fight, two headless mannequins dressed as 18th-century gentlemen stand on opposing sides of a screen made of eggs, locked in a surreal yet deadly game. Both have long-barrelled guns that they fire through the eggs at each other, leaving charred fragments of shell lying around. It is like a 3D cartoon by Goya, ringing with the mad quality of the Spanish visionary’s Caprices, his surreal send-ups of stupidity and superstition.

There are more headless mannequins elsewhere. Two are firing Dutch-print cannonballs out of a replica cannon from – a recurring motif – HMS Victory. (Again, there is an air of Goya here, given the deranged futility underlying the Spaniard’s depictions of war.) It’s political, Shonibare’s interest in Nelson. This work comes with a pat official interpretation that Nelson’s naval victories paved the way for colonialism, and so are part of Shonibare’s comment on the legacy of empire. Similar texts are all over this exhibition, dutifully explaining every last fox-headed kid as an allegory of race and empire. But if Shonibare’s art was as simple as that, it would just be, well, I want to say Banksy. It would be banal agitprop. In fact, it is poetic, funny and somehow – beneath all the humour – profound.

Shonibare doesn’t hate the 18th- and early 19th-century world his art haunts. He loves it. He loves the clothes, anyway. His mannequins are exquisitely turned out, gaudily playful in their precise recreation of the line of a Regency dandy’s trousers, the narrow waist of a rococo rake’s coat. This exhibition is a masterclass in the history of fashion. In a new film showing in an old chapel in the park, Shonibare delights in how an 18th-century-style frock frames a singer’s bosom as she belts out an aria. It is Addio del Passato, from Verdi’s La Traviata. Hearfelt and tragic, this musical farewell to life is hardly the stuff of instant and easy political messages.

In fact, this show is full of images of death and spiritual transcendence. Nelson is not just a colonial bad guy in Shonibare’s series of posed photographs called Fake Deaths, but also a pale-faced clown trying out different ways of dying as he re-enacts scenarios found in famous paintings: by poison in Henry Wallis’s The Death of Chatterton; by gun in Manet’s The Suicide.

Meanwhile, fabric aliens are trying to take off in flying machines as nutty as anything Leonardo da Vinci dreamed up. And dandified children are trying on wings, too – angel wings that attach with leather straps, just like the ones street kids were given to wear whenever Caravaggio needed models for his paintings of angels. Fellow artist Orazio Gentileschi once popped round to Caravaggio’s house to return a pair he’d borrowed. And here they are again, strapped on to faceless urchins who can fly where the slave owners and fox hunters will never catch them.

Shonibare’s Wildean works are worth a thousand Henry Moores.