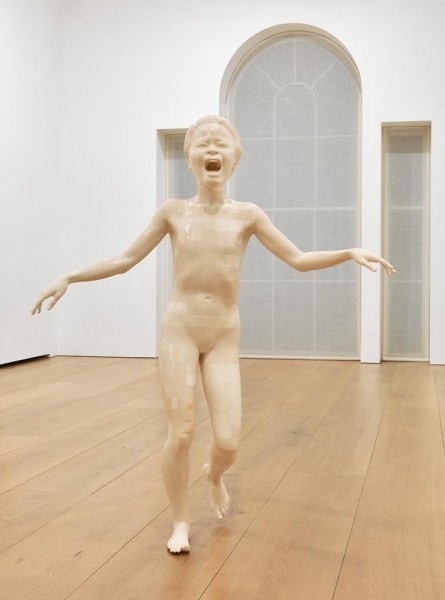 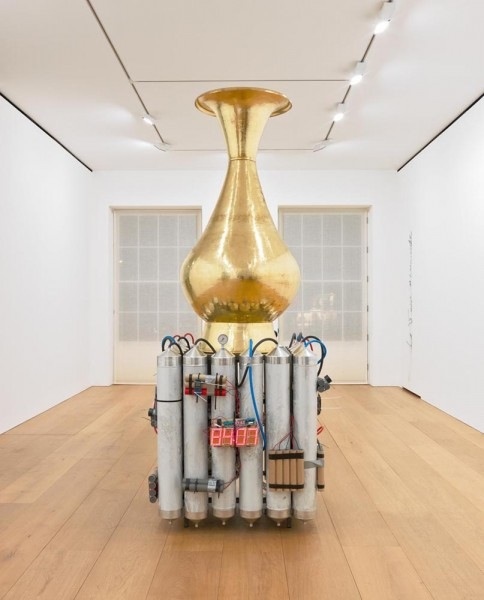 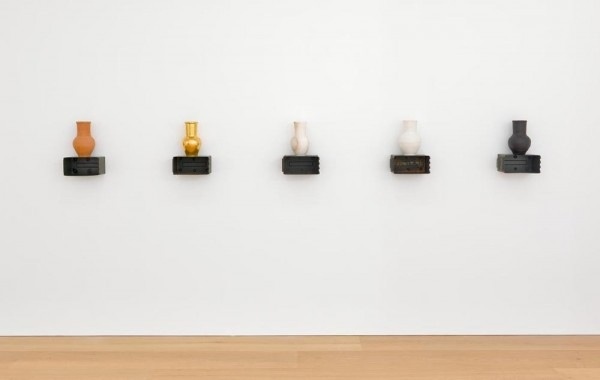 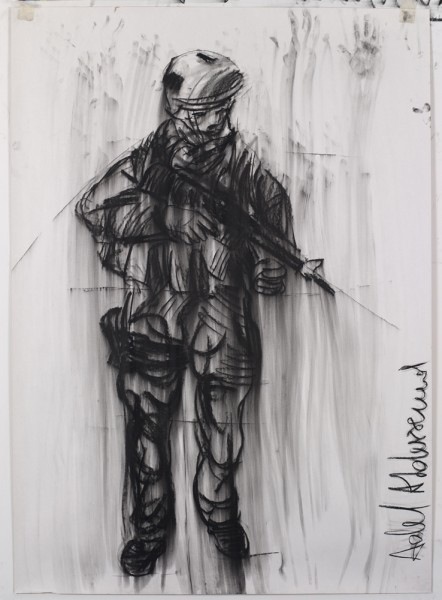 Le Vase abominable is the artist’s third solo show with David Zwirner since joining the gallery in 2008. The artist’s previous solo exhibitions at David Zwirner, New York were RIO (2009) and Who’s afraid of the big bad wolf ? (2012).

Across a wide range of media, Abdessemed transforms well-known materials and imagery into charged artistic declarations. The artist pulls freely from myriad sources—personal, historical, social, and political—to create a visual language that is simultaneously rich and economical, sensitive and controversial, radical and mundane.

In the exhibition of new work, cultural references become inseparable from themes of war, violence, and spectatorship. The ground floor presents the eponymous Le Vase abominable, a two-meter tall copper pot positioned on top of a replica of a large explosive device, a carefully crafted bomb, whose relationship to the vase remains ambiguous. Nearby is a group of five smaller, similarly shaped vases each made from a different material, including gold, gum, and salt. Their repetitive yet incongruous appearance highlights a recurring dichotomy in the artist’s work between décor and fetish, which appears further intensified by the materials used.

On the floor above, a group of works takes their point of departure in the well-known reportage photograph of children fleeing a napalm attack during the Vietnam War. Made entirely in mammoth ivory, Cri depicts the young girl in the center of the image, running naked with her arms outstretched and her mouth open in a scream. Her life-sized figure is accompanied by a series of drawings featuring soldiers in full gear—they may represent those surrounding the children in the photograph, or any other armed conflict. An animation, entitled State, is projected onto all four walls in a separate room and features labyrinth-like drawings which recall Republican prisoner protests at HM Prison Maze in Northern Ireland during the late 1970s and early 1980s. Fighting for their right to wear their own clothes on the basis that they were not convicted criminals, they wrapped themselves in blankets rather than the provided uniforms and refused to leave their cells, which in turn were not sufficiently cleaned. They consequently smeared the walls with their own excrement, beginning the so-called “dirty protests.”

About the artist
Born in 1971 in Constantine, Algeria, Adel Abdessemed studied at the École des beaux-arts de Batna and the École des beaux-arts d’Alger, Algiers (1987-1994), before traveling to France where he attended the École nationale supérieure des beaux-arts de Lyon (1994-1998). He was an artist-in-residence at the Cité internationale des Arts de Paris in 1999-2000, and the following year at P.S.1 Contemporary Art Center’s International Studio Program in Long Island City, New York. After living in New York, the artist moved to Paris, then to Berlin, then back to New York. He now lives and works in Paris.

In 2012, his work was the subject of a major solo exhibition at Centre Georges Pompidou in Paris, Adel Abdessemed Je suis innocent, which was accompanied by a fully illustrated catalogue published by the museum and Steidl. Also in 2012 was a special presentation at the Musée Unterlinden in Colmar, France, which displayed the artist’s Décor (2011-2012), four life-size sculptures of the cruci?ed Jesus made entirely from razor wire, next to the actual work from which it was inspired: the Isenheim Altarpiece, painted in 1512-1516 by German artist, Matthias Grünewald. In Summer 2013, Décor will be on view at the Punta della Dogana in Venice. A forthcoming solo exhibition planned for Fall 2013 at Mathaf: Arab Museum of Modern Art in Doha, Qatar is being organized by Pier Luigi Tazzi (who recently authored Adel Abdessemed: Conversation with Pier Luigi Tazzi, published by Actes Sud). In Fall 2014, Moscow’s Multimedia Art Museum will host a survey of video works. Abdessemed will be the first Western artist to have a solo exhibition at the Yuz Museum, Shanghai, founded by Budi Tek. The Yuz Museum, Shanghai, will open in 2013, and Abdessemed’s exhibition will take place in 2015.