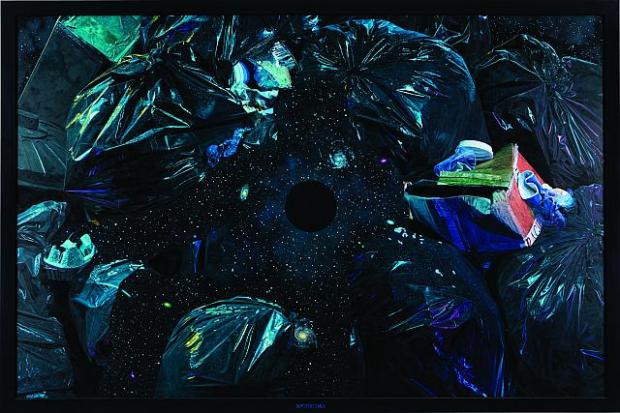 This exhibition from Keith Tyson features sixteen paintings inspired by poetry, music, and personal references, executed by the artist over the last three years.

Panta Rhei, which translates as “everything flows” in Ancient Greek, embodies the idea of a world in perpetual motion, a fundamental concept for Tyson.

“In the past, I’ve always tried to represent what I call the ’Field’, which for me, is the myriad of networks – whether physical, conceptual or emotional – that make the present moment. All these systems combined form our interdependent world. I attempted to reflect these associations through sculptures, in the immersive installation Large Field Array or on a smaller scale, through the fluid dynamics of the Nature Paintings. This time, I wanted to gather the ideas and techniques I’d learnt in previous pieces and work exclusively with paint to compose visual poems.”

One of the techniques that Tyson uses is to paint over an existing work or on a blank canvas, and then scrape paint over the surface. This scraped layer is then used as the ground for a second image. The objective is to generate interferences and give rise to what Tyson refers to as “complex surfaces” formed of two or more different images sharing a connection.

Highlights include Panta Rhei, a small ten-by-six-inch piece that lends its name to the exhibition, that was originally derived from a painting of a sailing boat found in a second-hand shop. Reworked by Tyson, the new painting features a modern harbour scene and consequently combines imagery and techniques from two moments that occurred a century apart. The breeze in the trees, meanwhile, was executed in the English countryside and features interpretations of the same oak tree layered on top of one another, conveying the passage of the seasons and the changing mood of the artist over time. This work also represents the first time that Tyson has painted outside of his Sussex studio.
?
www.pacegallery.com

About The Artist
Keith Tyson (b. 1969, Ulverston, England) is one of the most important and prolific British artists working today. His paintings, drawings, and sculptures have been the subject of more than 20 solo exhibitions since 1995 and over 100 group shows since 1990 and are held by important collections including the Museum of Modern Art, New York; the Tate Modern, London; Centre Georges Pompidou, Paris; Fondation François Pinault, Paris; and the San Francisco Museum of Modern Art.
The recipient of the Turner Prize in 2002, Tyson received an Honorary Degree of Doctor of Letters from the University of Brighton (2005) and the ICA Arts and Innovation Award, London (1996). He studied at the Barrow-in-Furness College of Engineering (1984–1989) and the Carlisle College of Art (1989–90). He received his M.A. from the University of Brighton (1993). Tyson is currently the Artist in Residence in the Department of Astrophysics and Theoretical Cosmology at Oxford University.
Tyson has been represented by Pace since 2005. This is his fifth exhibition with the gallery, including the U.S. debut of his massive installation Large Field Array, which was shown at Pace in New York in 2010 following its presentation at the Louisiana Museum of Modern Art, Copenhagen, and the De Pont Museum of Contemporary Art, Tilburg, Holland.