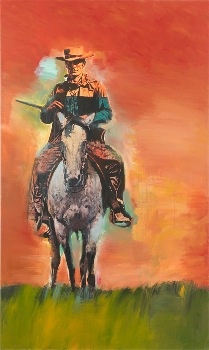 A cowboy walks into a bar and says to the bartender, “Who’s the asshole who owns this shithole?”
—Richard Prince

Over the last thirty years, the American cowboy has given rise to some of Prince’s most celebrated works. Dividing into several phases between the early 1980s and the present, his rephotographing of verité images inspired by cowboy Westerns and produced for the advertising industry, reveals as much about his shifting relationship to an American icon and its construction by the mass media as his use of evolving reprographic technologies.

In the earliest iterations, out of necessity Prince shot around advertising copy to obtain the final edit, resulting in tightly cropped, grainy close-ups of larger-than-life ranchers, printed in standard format. In the second stage, enhanced production techniques allowed him to substantially increase the scale and intensity of the final images, and move his subjects out into the landscape. In the third phase he was able to work from high quality images totally devoid of copy. Thus the cowboys were reduced to diminutive yet legible ciphers dwarfed by vast, bucolic American landscapes. Transposed into the world of art, these cinematic vistas evoked—not without a trace of irony—the great Romantic tradition in painting.

For his first Cowboy paintings, which follow earlier series of Nurse paintings, Prince has again tapped pulp fiction for inspiration. Directly inspired by the covers and cover artwork of so-called “frontier books,” he has transferred to canvas greatly enlarged inkjet prints of scanned figures removed from their original settings. He then paints in, around, and over the prints in an uninhibited manner evocative of post-war American painting—from sedimentary layers and floating blocks of color to swipes and splatters of more animated moments.

At a glance, the Cowboy paintings are ironic appropriations intended to deconstruct both a regressive stereotype and the truth of uninhibited artistic gesture. But on closer scrutiny, there is an undeniable element of complicit pleasure in Prince’s masterfully casual renderings of figure and ground where the powerful male gunslingers are little more than pretexts or catalysts for free experimentation with paint. Lush, lurid abstract grounds, rapidly executed, replace the information of the former landscape backgrounds, intimating at various atmospheric conditions or temperaments: the vaporous pastels of a midday summer haze; a rosy dawn or a vermilion sunset; the fresh green depths of a mountain landscape, or the ominous dark of night. 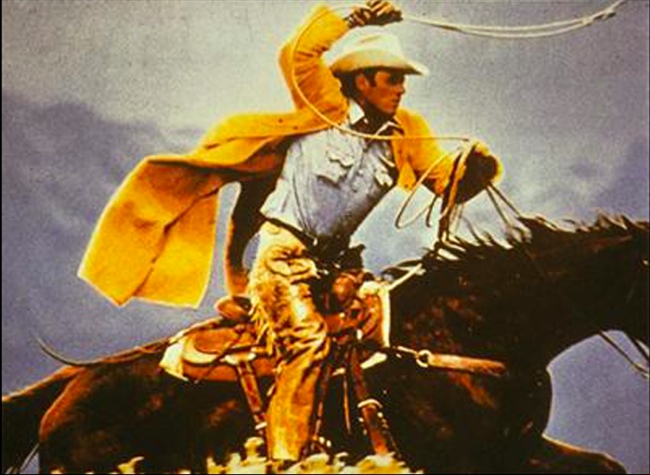