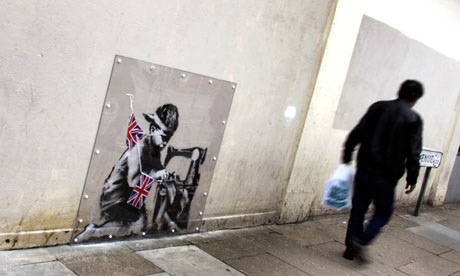 The Banksy mural next to a Poundland in Wood Green before it was removed. It is up for sale at an auction house in Miami. Photograph: Alamy

This article titled “Haringey council: Banksy mural belongs in our community” was written by Ben Quinn, for theguardian.com on Tuesday 19th February 2013 23.17 UTC

A local authority in north London where a Banksy mural went missing last weekend before turning up for auction in the US has been talking to police about “securing” at least one other work by the artist.

Haringey council has also written to the Arts Council to seek help in securing the return of the mural, which was removed from the outside wall of a Poundland shop in Wood Green, and which is for sale with Fine Art Auctions Miami with a guide price of 0,000 to 0,000 (£323,000 to £452,000).

The artwork of a barefoot boy using a sewing machine to stitch union flag bunting, apparently in a sweatshop, appeared on the outside wall of the shop in May. It was widely interpreted as condemning child labour and mocking the impending Queen’s diamond jubilee celebrations.

Officials at the local authority have held talks with the Arts Council about whether the art work was exported “appropriately”, said Haringey councillor Alan Strickland.

“We would like the Arts Council to take a view on the high profile British art being removed like this,” he said.

“We still have not got confirmation that this piece was removed legitimately,” added Strickland, who also said that the councils had been speaking to the police about securing another Banksy.

“The community feels that this art work was given to it for free, and that it should be kept in Haringey where it belongs, not sold for a fast buck. This is an area that was rocked by riots less than a year before this mural was painted, and for many in the community the painting has become a real symbol of local pride.”

A Poundland spokeswoman has said the company was not the owner of the building and had not removed the artwork.

The owner of Fine Art Auctions Miami, Frederic Thut, told the Sun it was being offered for sale by a well-known collector who he refused to name. He added: “The collector signed a contract saying everything was above board.”