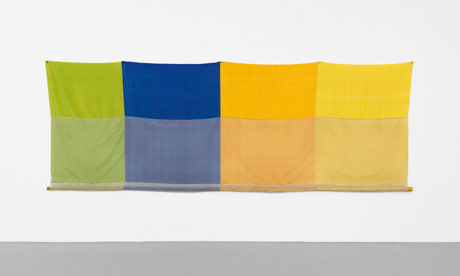 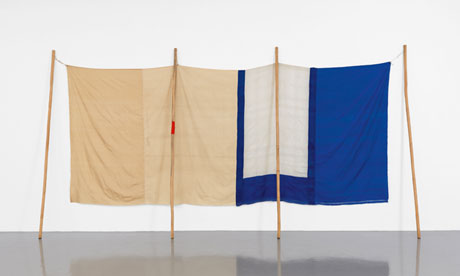 This article titled “Robert Rauschenberg: love and loss in America” was written by Jonathan Jones, for The Guardian on Saturday 9th February 2013 08.01 UTC

It was a Saturday in New York, and the poet Frank O’ Hara was tired from working all week in an office at the Museum of Modern Art. He put on his radio, but it was all soppy music. He wanted something that intimated “immortal energy”. Then, he says in his poem “Radio”, his thoughts wandered to art:

Well, I have my beautiful De Kooning
to aspire to. I think it has an orange
bed in it …

An orange bed. Willem De Kooning is often thought of as an abstract painter, one of the greatest of the abstract expressionists who made New York painting famous after the second world war. O’Hara, an art critic and curator as well as poet, helped set up The New American Painting, a 1958 touring exhibition that awed Europeans with abstract expressionism. But on a Saturday, he needed art in a secret, inexplicable way.

Looking at a smeared window of uneasy bright colours by De Kooning, he did not just see non-referential paint, but an orange bed. Within abstraction blazed reality and not just any reality – the fact of a bed whose orange blazed the idea of sex.

Abstract painting in New York in the 1950s was not about the utopias and spiritual neverlands the first European abstract painters had longed for. It was about life – and lust. De Kooning makes the sexual rage of his art most explicit in his “Woman” paintings. Another artist made O’Hara’s vision of an abstract expressionist bed still more real.

Robert Rauschenberg’s Bed hangs in MoMA, a piece of furniture on the wall. It is both a bed and a painting. There is no canvas: Rauschenberg got a pillow, a sheet and a quilt and stretched the sheet and quilt across a wooden frame, taking the place of the canvas. On the pillow, he scrawled enigmatic graphic marks. On the upper part of the quilt and spilling on to the undersheet, he painted blotches of red, yellow, blue, black and white.

It was 1955, the year Rauschenberg turned 30. He already had a lot of life behind him. He’d served in the second world war as a psychiatric nurse and gone off to Paris to learn art, met a girl, married her, then met a boy. A couple of boys, actually. After having a child with the artist Susan Weil, he went off to Italy and North Africa with the painter Cy Twombly. His beautiful photographs of Twombly in Venice and Rome document their affair – as does his “combine” painting, Bed.

Twomblyesque scribbles cover the pillow. Meanwhile, the stark blocks of red, yellow and blue on its cover mirror the red, yellow and blue of Target with Four Faces, also now in MoMA, which Jasper Johns painted in the same year 1955. Rauschenberg and Johns lived at this time in neighbouring apartments and exchanged ideas constantly. They were collaborators in artistic revolution in a way that invited comparison with Pablo Picasso and Georges Braque, but with a major difference: Rauschenberg and Johns were lovers. Bed is a diary, written in code: it comemmorates a triangle of love and talent.

Bed belongs to what is arguably the greatest series of works of art ever made in America. It is said to have been Johns who came up with the word “combines” to describe the works Rauschenberg started to assemble in 1954, putting together found photographs, newspaper clippings, fabrics, furniture, tyres and stuffed animals in intense configuations, all soaked and veiled in abstract expressionist paint. Thinking about them, I find myself struggling to find any match for what Rauschenberg achieved, not just in visual art, but in other arts, such as fiction. For what he created in these complex, tantalising, epic works was that elusive cultural totem, the “great American novel”.

One analogy in their time for these conjoined slices of life is Fontana Mix, a 1958 sampling of everyday urban sounds by the composer John Cage. In this and his earlier Williams Mix, Cage does something similar to Rauschenberg – he collages the world around him. They were friends – Cage, Johns, Rauschenberg and the choreographer Merce Cunningham. In 1953 Cage drove his car with a tyre Rauschenberg had soaked in paint along 20 joined sheets of paper on a New York street to create Automobile Tyre Print: here is art that lets the world speak through it; a tyre driving along the road – the most ordinary and frequent of modern moments – is preserved.

Cage was older than the young artists he befriended. It is all too tempting to see him as the “influence” – above all in transmitting the ideas of a then-obscure European high priest of chance, Marcel Duchamp. But there is a lot wrong with the academically neat view that Duchamp influenced Cage who influenced Rauschenberg. It misses the sheer originality of Robert Rauschenberg – his American nature.

An early experiment by Rauschenberg, a series of purely white paintings, was credited by Cage as the inspiration for his silent piece of music 4′ 33″. In the early 1950s Rauschenberg was a fountain of ideas that came from everywhere and nowhere. In Rome with Twombly, he hung “fetishes” from trees among classical statuary. Visiting Willem De Kooning, whose connection with the painterly side of Rauschenberg is just as deep as Cage’s is with the Duchampian game-playing side, he asked for a drawing so he could erase it.

He hit gold when he started making paintings that were collections of stuff. The combines hang on gallery walls like immense, cargo cult relics, or stand as free objects that you can walk around. To approach his free-standing piece Untitled (c.1954) in the Museum of Contemporary Art in Los Angeles is to be transfixed by a flood of memories, allusions, secret stories and deep feelings. An old photograph of a man in a white suit is fixed to a wooden panel that flanks an upright box: the box is balanced on a white chair or table leg and plastered with other black and white pictures, letters, newsprint. The collage extends underneath it within a hollow. Look from the other side and a pair of white shoes sits in the box.

The pictures and texts and the sheer battered nostalgia of this work evoke the south – many fragments are souvenirs of Rauschenberg’s childhood in Port Arthur, Texas. Is the white suited man who seems to have vanished from his own shoes a metaphorical self-portrait? The man Rauschenberg is not? Perhaps, and yet when I saw it in LA shortly after Cy Tombly’s death I saw it as a portrait of Twombly – a southern dandy born in Lexington, Virginia.

The personal nature of this and other combines is unavoidable: but they are not allegories. The point of Rauschenberg’s art is that it is dense in narrative without ever quite adding up to a simple story you can tell in a few words. Here lies its power, for that tension between reading and not being able to read his complex, shifting tales of love and loss in America gives his art an epic power to suggest a whole continent of desire.

That collaging of America’s fault lines runs from his combine Canyon, in which he juxtaposes a photograph of his son with a stuffed American bald eagle to invoke the myth of Jupiter and Ganymede, to his silkscreen paintings of the 1960s in which photographs of astronauts and farms are overshadowed by the face of assassinated president John F Kennedy.

Rauschenberg’s art is the most generous of its age. He let the world in and gave back to the world. His Jammers series, showing at Gagosian in London, comes from the 1970s when he was channelling his money into idealistic global art projects. Inspired by a visit to India, their simple pleasure in coloured fabrics goes back to his earliest art. They consist mostly of large, boldly chromatic sheets of dyed cloth, hung from rattan poles, interspersed with some works that arrange the poles themselves, paused at intervals, like slender dancers choreographed by Cunningham. Meanwhile, the Barbican is celebrating his early works alongside those of Johns and Cage. Paint, photography, wood and coloured cloth are all equal in Rauschenberg’s epic imagination. Like Walt Whitman, his art expresses the best thing about America. It is a democracy.

• The Bride and the Bachelors: Duchamp with Cage, Cunningham, Rauschenberg and Johns opens at the Barbican on Thursday: .