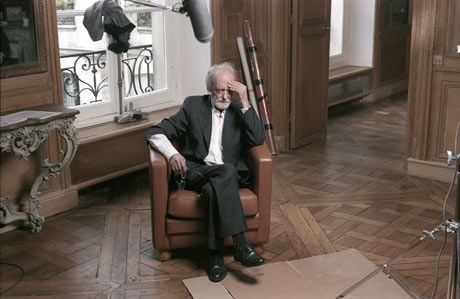 Gerard Byrne is an Irish artist in his early 40s whose name has been on people’s lips of late. He was a hit at last autumn’s Documenta in Kassel, has represented Ireland twice at the Venice Biennale and had solo shows in capital cities across the world. His work is lens-based, in gallery parlance, meaning that he makes videos, films and photographs. But he is mainly known for videos, and these are mainly reconstructions of conversations between historic figures taken from old magazines. He turns texts into scripts into visual dramas, with strikingly intelligent results.

In Byrne’s first major retrospective in this country, for instance, you can see the film that made his name – 1984 and Beyond. This has its origins in a 1963 issue of Playboy magazine in which a number of science-fiction writers, including Isaac Asimov, Ray Bradbury and Arthur C Clarke, were invited to discuss the future (what else?) over cocktails in some swanky hotel. Sometimes their predictions are accurate – from private space travel to the invention of Viagra – but on the whole their visions of lunar colonies, alien encounters and physical immortality are disappointingly fanciful.

You could discover this from the original text of course (extracts are conveniently provided by the artist). What Byrne does is to disinter history and carry it into the present. He casts a team of Dutch actors to do their best with the writers’ American accents, sets the conversation in a modernist building with period sculptures by Hepworth and Moore – theatrical signs of the times – and lets the anomalies play themselves out.

The actors’ teeth are too white, their performances a touch formal, their accents slightly erratic, so that the smooth surface of plausibility is troubled from the start; so far, so Hollywood biopic. But this is a reconstruction of a historic conversation, and what’s actually said is more insidiously amiss than the mise-en-scène. There is much talk of overpopulation, mediocrity and cryogenics. When one of the writers envisages a Darwinian elite who will leave Earth and all its stupid people behind, you hear echoes of eugenicism, as well as presages of today’s reprogenetics movement.

And so it goes on, the scenario occasionally comic but mainly sinister: history reprised as both tragedy and farce.

Byrne’s work goes in both directions. His reconstruction of a naked piece of advertorial – a stage-managed dialogue from National Geographic between Frank Sinatra, “Chairman of Entertainment”, and Lee Iacocca, chairman of Chrysler, about the 1981 Imperial – is bitterly comic. Two notably wooden New Jersey actors crunch glumly along a disused railtrack (as if to indicate the fate of the car itself), one trying to sell the Imperial to the other. “Frank, listen, we have more luxuries as standard than any other car in America,” boasts Lee in reply to Frank’s softball questions, but he’s getting nowhere and they wind up in a grim diner. From start to finish there are overtones of the kind of brutality Sinatra knew a bit about. Cars, careers, consumer luxuries: they are all destined for the scrap heap.

Byrne’s stagings are always theatrical, to the extent that some of his films are screened on slabs leaning out of the floor like gigantic tombstones. He may put the images before you but the sound significantly behind you; he may move you between several screens or seat you like the member of an audience.

To watch New Sexual Lifestyles you slouch in a 70s chair remarkably like those in which the members of another Playboy panel are seated, including psychologists, journalists, doctors, Linda Lovelace and the vicar of a gay American church. Sounding positively sociological about the new vogue for massage parlours, S&M and so forth, they ruminate on group sex with a competitive seriousness bordering on tension, until one speaker suddenly announces that as sole breadwinner he feels that he owns his wife, and a shocked frisson runs round the room. It is a small political epiphany, this thuggish sexism hitting home, so to speak, and one feels it is not just a relic of the original text but alive among the actors too.

This is Byrne’s particular gift. He does it with photography too, making remarkable images in which the past seems to inhabit the present. One looks into his silver-grey scenes of American life – the white janitor in sharp focus by the Park Avenue door, the black cleaner a walking blur – unable to find any index of the period at all, the only evidence that it must have been taken during the artist’s own lifetime.

These photographs are extremely subtle, particularly his “Abolish War” scene in which one feels that the vision of silver-haired activists picnicking with their banners in an Arcadian glade can only be a thing of the optimistic past, and no amount of close scanning says otherwise. Incredulity carries its own sad truths.

The most recent work in this show restages a surrealist sex discussion convened by André Breton in 1928 in which the old shockers work hard at outraging the world and each other. There is blasphemy, brutality, perversity and plenty of bragging: “Have you ever paid for sex?” “No, but I have been paid!”

In a sense, Byrne’s film is a form of consciousness-raising. It declares (far more than the original text, which was heavily edited by Breton) just how much stage direction underpinned these provocations, with bullying just below the surface at all times. The actors seem to ham it – as when Yves Tanguy claims to relish the idea of defiling a church and then looks anxiously about for the affirmation that never comes – but the melodrama only emphasises the true artificiality of these meetings.

There are no women present in this gentleman’s club, of course. But it’s not news that the surrealists were terrible sexists. What’s so strong about Byrne’s work is that in turning a period piece into something like an edition of Play for Today, complete with close-ups and character studies, he allows one to be as amazed by the candour of these men, almost a century ago, as one is shocked by their disgust at the idea of women’s pleasure or homosexuality.

The Whitechapel show is rich and stimulating. Its central idea may be simple – viewing (or reviewing) the past in the present – but it is played out in subtly different ways. They don’t all come off, but when they do the result is as involving as anything you will see on video. Best of all is the marvellous casting of the French actor Michel Debrane in the role of Jean-Paul Sartre pronouncing on his love of women in a notorious interview. His views are devastating, and no longer safely tucked away in the printed past. 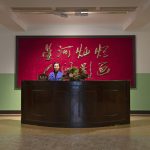 GalleriesNow is the world’s leading gallery guide, with everything you need to know about great art wherever you are. Our selection of five great exhibitions recorded in VR for you to make a virtual visit online.