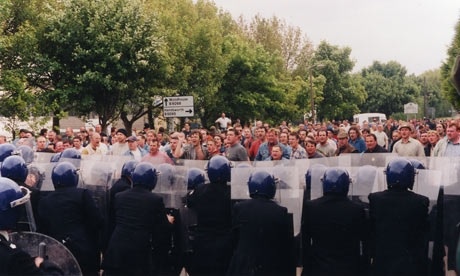 This article titled “Artangel seeks ideas – the wackier, the better” was written by Charlotte Higgins, Chief arts writer, for The Guardian on Monday 14th January 2013 15.01 UTC

Want to stage a realistic re-enactment of a violent 1980s industrial dispute? Or perhaps line the interior of an apartment with copper sulphate crystals?

These are the kind of unlikely proposals that the arts commissioning body Artangel has realised. Now it is asking artists, composers, filmmakers and choreographers to propose fresh ideas for up to five fantastical projects, on which it will lavish £1m between them .

According to Jeremy Deller, who won the 2004 Turner prize for his Artangel project restaging the miners’ strike confrontation known as the Battle of Orgreave, the ideas submitted should “make Artangel sweat a bit. People should suggest something that no one else would touch”. When he applied to Artangel with his proposal, which involved a cast of hundreds: “I didn’t think it was really possible to do it. I was pretty taken aback when they said they would take it on.”

Roger Hiorns was the artist who created Seizure, a London flat that was coated in Yves-Klein-blue copper sulphate crystals (right). It earned him a place on the 2009 Turner prize shortlist and this May the piece will be installed permanently at the Yorkshire Sculpture Park. He said: “With the level of insanity of the project it was interesting to have that level of commitment.”

Proposals for Artangel Open are invited by 29 April from artists working in all media: from composers and theatre-makers to choreographers, visual artists and filmmakers. Shortlisted artists will have the opportunity to develop their ideas with mentors, who include filmmakers Andrea Arnold and Penny Woolcock and artists Rachel Whiteread and Tacita Dean.

There will also be 12 “open platforms” in late January and February for artists in cities around the UK, where interested artists will be able to meet Artangel co-directors James Lingwood and Michael Morris.

Lingwood said: “We hope to find younger artists who will put forward amazing proposals. We feel that we want to get ideas that are forming in the darkness into our field of vision.”

Deller’s advice? “Be clear and concise about your idea – don’t give two sides on the theory behind it. Artangel wants its own capabilities to be stretched. Give them something entirely new.”