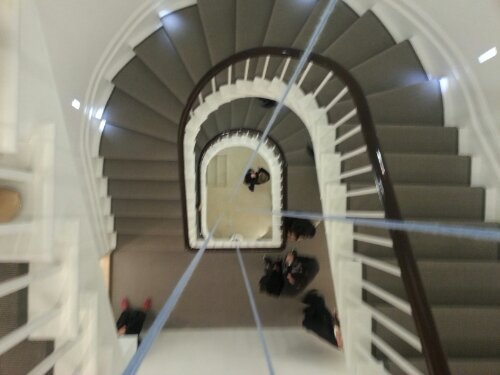 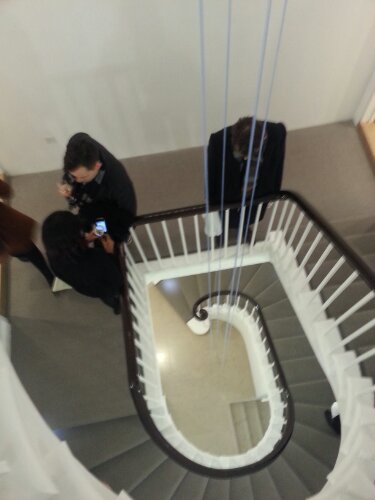 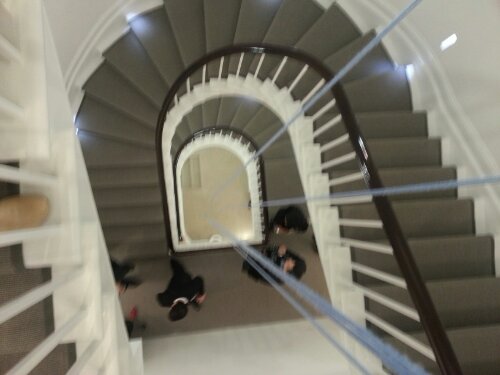 Last Thursday marked the opening of American artist Fred Sandback’s new exhibition at the David Zwirner gallery’s London location. The exhibition features a major selection of the signature minimalist sculptures that have defined the artist’s career from the 70’s to 2000.

Sandback is a conceptual sculptor whose work is defined by his use of yarn as material, attached at fixed geometric points in a space, to create sculptures that planes and spatial barriers, altering our conception of space. In 2011, gallery 2 of the Whitechapel was transformed into a playground for Sandback’s works, adorned in yarn sculptures and drawings spanning the dimensions of the entire room.

Sandback initially worked with metal rod and elastic cord in his artistic practice, but soon switched to yarn once he realized the potential of using a material that is even more minimal. The most compelling aspect of Sandback’s work is that it is interactive but not mobile – instead it remains static as we move around it and even though we are looking at the outline of something that isn’t there, we have the sensation that the yarn is outlining some sort of invisible volume.

The artist’s signature work Untitled (Four-part Vertical Construction) 1988, is featured in the exhibition. The piece consists of looped yarn to create 4 single adjacent lines in 2 complimentary colours. It is displayed on the curved staircase at the entrance of the space, extending upwards through the gallery.

In the process of walking around the various artworks, it is easy to suspect that the yarn is suspended, or that mirrors are involved somehow. This contributes to the unsettling feeling and spatial confusion as the yarn realigns depending on the varying perspective of the viewer, creating what can only be described as drawings – although, while drawings are trapped in two dimensions, Sandback uses yarn to carve sections into the space, creating the illusion of three dimensions. None of his “2 line” works feature any intersecting lines – for the very simple reason that this would flatten the image, and Sandback’s main goal is to draw a form in space, however abstract.

Aside from this aesthetic pleasure of watching new shapes and relationships between planes unfold, is there any emotional significance to Sandback’s work? Perhaps his work is an invitation or the viewer to reconsider boundaries and our response to them, perhaps the idea of shifting relationships vantage points according to new vantage points. Sandback’s work can be said to evoke the idea that, like space, the dynamic between people cannot remain static. One thing is for certain – Sandback’s work builds up a dialogue and synthesis with the space it surrounds rather than merely bisecting it.

Sandback’s other recent solo exhibitions have included: The Museum of Contemporary Art in Denver (2011), and the Fruit Market Gallery in Edinburgh (2006). Sandback’s work is also permanently represented in numerous public collections including the Musée National d’Art Moderne and Centre Georges Pompidou in Paris, The MoMA and Guggenheim Museum in New York, and the Pinakothek der Moderne in Munich.

The Zwirner gallery has represented Sandback and shown his work since 2004; the current London show will be the fifth one presented by the gallery. In addition, on the 16th of January a supporting group show entitled “Days in Lieu” will be opening at the Zwirner space, inaugurating the opening of a second floor project space “The Upper Room”.