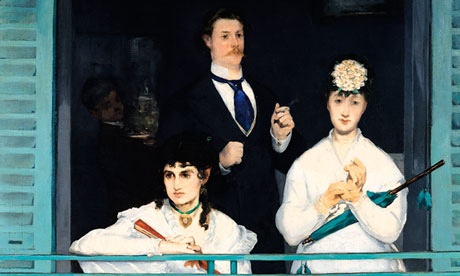 This article titled “Manet’s portraits: the artist on the knife-edge of photography” was written by Philip Hensher, for The Guardian on Saturday 12th January 2013 09.01 UTC

Manet was the last French painter to love black for a very long time. The museum habit of placing him among the Impressionists has a curious effect. In New York’s Metropolitan Museum, stepping from the interminable Renoir rooms into the Manet room produces a shock; stepping back produces another one, not quite in reverse. Renoir, who believed and said that black did not exist, that all shadows had a colour, apparently succeeded a painter who loved the knife-edge contrasts of black. The intense matadors of Manet give way to the smiling pastel matrons of Renoir; dramatic costumes, as if for a stage performance or a last appearance in the arena, are succeeded by a natural sincerity. Black disappeared after Manet, not to reappear until Matisse. Pleasingly, the aged Renoir lived to be deeply shocked by the black horizontal bar in Matisse’s Intérieur à Nice, now in Philadelphia.

Visitors to the Royal Academy’s new blockbuster Manet exhibition will be immediately struck by the glowering, Spanish-flavoured black, which separates him so strongly from the next generation. But on the other hand, there are aspects of Manet’s painterly practice that root him powerfully in his own time, and strongly influenced the generations that followed – not just in painting. The age was one that was fascinated by what Gerard Manley Hopkins was to call “dappled things” – the effect of coupled light and dark in flecks and movement under trees and in urban shade. “All things counter, original, spare, strange; whatever is fickle, freckled (who knows how?) with swift, slow; sweet, sour; adazzle, dim”; Hopkins’ catalogue starts to surface elsewhere, in Manet’s first mature paintings, and maintains a powerful presence in the art, music and above all painting of the rest of the century.

Dapplement surfaces in the great Musique dans les Jardins des Tuileries of 1862, somehow both epic and domestic in scale, and is the thing that saves it from direct comparison with the social panoramas of William Powell Frith, across the Channel. An all-enveloping rippling light turns it into a study of atmosphere. Dapplement, with its unpredictable emphases and shadows, its world of half-glimpses and dramatic clarity, determines what meaning Le Dejeuner sur l’Herbe might possess. Dapplement had occasionally interested earlier painters, and Le Linge of 1875 pays some homage to the great series of laundress paintings of Fragonard, a century before, where the figures are almost lost in bursts of light falling on steam.

A subsequent generation, including Renoir in the Bal du Moulin de la Galette, which recapitulates Musique dans les Jardins des Tuileries, used dapplement to create a rippling uniformity in a diverse scene. Manet’s fascination was rather different. It is used to demonstrate the unpredictable object, the startling contrast, the grotesque event with the unexpected fall of direct light amid shade. It combines the detailed passage with a grand sweep of crepuscular shade, the closely observed with the mysteriously vague. Dapplement was a tool for him, like the sudden emergence of a social group into the light from deep shade, like the curious group in Le Balcon at the Musée d’Orsay, or the great Dejeuner dans l’Atelier in Munich. It froze a moment in all its curious combinations, as photography was one day to do. Dapplement in Manet is much more like the dappled observations of his friend Chabrier’s piano piece “Sous-bois” – a work so strange I remember repeatedly stopping while learning it as a boy, unable to believe that a composer of the 1870s could intend these sounds. Manet’s late Un Bar aux Folies Bergère hung over Chabrier’s piano; it is nice to think of the mercurial musician looking up as he played. Manet’s dapplement resembles the gorgeous and unpredictable shifts between soloist, septet, chorus and orchestra, between foreground and sweeping backdrop, which Berlioz found for the end of the fourth act of Les Troyens in the late 1850s. It resembles, too, the bizarre juxtapositions in Madame Bovary, such as the declarations of love against the cries of an agricultural auction, and, much later, the freakish shifts of direction in the poetry of Manet’s friend Mallarmé – his early “L’Après-midi d’un Faune”, like the Debussy orchestral prelude, is an ode to dappled light and the bizarre, erotic contrasts it produces.

Manet’s art is devoted to the wrong thing in the wrong place, unpredictably caught out and spotlit by the fall of light or the pitiless gaze. Le Déjeuner sur l’Herbe, with its outrageous combination of clothed male figures and nude, or deshabillé women, was defended by Zola on the grounds of classical precedent. (Not quite as much as Zola claims, however.) There are Giorgione landscapes and Titian interiors that exploit the same contrast. But Manet’s point is the indecency of the contrast in a contemporary context – the very fashionable little tassled cap on the head of one of the men is the most obscene thing in the painting. Similarly, in the sumptuous Olympia, what turns the nude into a shocking study of a prostitute? It is the clothes – the clothes the maid wears, the orchid in the hair, the black ribbon about the neck, the pearl earrings and the bracelet, and above all, the slippers – that transform the nude. There are franker 19th-century studies of the female form, such as Courbet’s Origine du Monde, but none so ingeniously obscene.

Dressing up is the source of much joy and bizarre contrast in Manet. Go back to the incomparable Manet room in the Metropolitan, and look around. The beautiful Mlle V en Costume d’Espada has the face of a handsome boy, and would pass as a matador but for one thing – the painter’s voluptuous enjoyment of her unmistakably feminine bottom and swelling belly. Next to that, an absurdly upright 1866 matador with showy, excessive sideburns seems to be dressing up as a man, too, as does the little boy with a serious expression carrying a sword that is far too big for him. And then the limp Christ with the angels, their expressions not sweet and generalised, but very much studies of hard-faced Parisian women, perhaps women whose trade is the laying out of corpses – what to make of that? Was Manet quite serious?

Manet retained a detached relationship to the subject matter of paintings that challenged even the most sympathetically inclined of his contemporaries. Gautier was alarmed by the combination of realism and topic in Le Christ Mort et les Anges. Zola, in the course of his spirited defence of Manet, was not quite right to say:”Feeling that he was making no progress by copying the masters, or by painting Nature as seen through the eyes of individuals who differed in character from himself,” Manet “came to understand, quite naturally, one fine day, that it only remained to him to see Nature as it really is, without looking at the works or studying the opinions of others.” The detachment from artistic tradition comes not through complete freedom, but from a willingness to examine and break the rules of presentation. This urge has, it turns out, resulted in a series of cunning traps laid for the oversophisticated. There is a large body of critical work about Manet’s last major painting, Un Bar aux Folies Bergère, either decrying its impossible depiction of a reflection, or talking about the subtle fantasy that results from this impossibility. It took until 2001, and the reconstruction of the image by an Australian art historian, Malcolm Park, before the scene was shown to be perfectly plausible. Manet had just taken the greatest care to make the scene look as impossible, and indeed ineptly constructed, as he knew how.

Portraiture, which is the focus of the Royal Academy’s show, had become still more hidebound by the advent and influence of photography. As one of the great early photographers, Nadar, remarked in his autobiography, the advent of the carte de visite type of photographic portrait “spelled disaster. Either you had to succumb – that is, follow the trend – or resign.” Carol M Armstrong reminds us in the RA catalogue that Manet’s friend Baudelaire had been similarly scathing about photography’s impact on society in his Salon of 1859, speaking of the moment when “our squalid society rushed, Narcissus to a man, to gaze at its trivial image on a scrap of metal”.

Manet’s portraiture is devoted to the image that is controlled not by the conventions of the form, still less of the acceptable conventions of emerging photography portraiture, but by the gaze of the artist. If some of the portraits, such as the famous one of Zola, follow the conventional format established by Ingrès, others, such as the portrait of Mallarmé or La Dame aux Eventails in the Musée d’Orsay, return to the fantasy portraits of Fragonard, and seem to draw inspiration from a blurred photographic print. Others revel in the momentary impression, even of a face glimpsed in the street in a dumpy, unconsidered posture in mid-movement, as if thinking that painting could achieve through imaginative action what photography, as yet, was not technically capable of. In the portrait Berthe Morisot au Bouquet de Violettes she is caught between poses, slowly moving into an amused smile. There are curious urban scenes to make Diane Arbus wonder; the grouping of the balcony, or the marvellously awkward and grumpy mother and daughter against the strangest of geometric backdrops in Le Chemin de Fer, now in Washington DC. These are moments that might have been glimpsed in the street, from the window of a moving hansom cab, by a device not yet perfected. Or alternatively, by an unresting and ceaselessly inventive eye, with a perfect visual memory, apparently in need of little mechanical help. It is difficult to tell.

Zola was quite right to base his defence of Manet on the painter’s perfect eye. It was an eye of great purity, and one that came to an ironic and undermining position after the long years of argumentative apprenticeship in the studio of Manet’s master, the salon painter Thomas Couture. (The scholar Beatrice Farwell remarks, surprisingly, that Manet was “the last great French painter to receive a long and academic training”.) What the eye saw, however, was not completely unprejudiced. It was the observation of the visual moments that would most offend, most alarm, most bewilder; a face in a street, a line of railings and a suggestion of rising steam, a momentary pattern of dappled light that reveals, of all things, a naked woman sitting with two well-off young men in a forest glade, turning and smiling. What do these things mean? The startled eye closes; turns away; turns to something else, with amusement, but no certain claim to be making any kind of statement about anything but the fall of light.