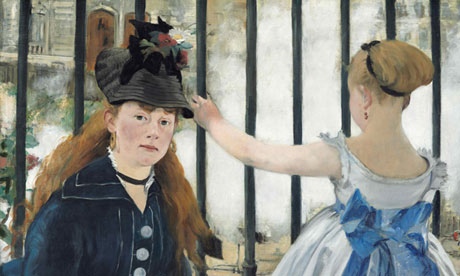 Everyday life … detail from The Railway by Manet, subject of a major show. Click for full image. Photograph: National Gallery of Art, Washington

Lovers, friends, flaneurs and everyday life feature in this major exhibition devoted to Édouard Manet‘s portraits. His models include Proust, Zola and Mallarmé, street singers and top-hatted Amazonians. Manet may have been a stylist of the emerging modern world, but his everyday was unlike yours or mine. Royal Academy, London W1 (royalacademy.org.uk), 26 January to 14 April.

Ceramics and knitted paintings, zoological specimens and amateur pieces, collaborations with and works by other artists – all have a place in Trockel’s universe. The German’s mercurial work is both playful and feminist; she is an indomitable talent who refuses categories. Serpentine Gallery, London W2 (serpentinegallery.org), 13 February to 7 April.

David Maljkovic: Sources in the Air

Modernist socialist architecture in the former Yugoslavia, ruins of utopia and dreams that turned to dust inform the Croatian artist Maljkovic’s strange, sometimes controversial art. His atmospheric installations and films plunge us into architectures of the mind – as well as futures that never happened. Baltic, Gateshead (balticmill.com), 15 March to 7 July.

British artist and film-maker McQueen won the Turner prize in 1999, and the Camera d’Or at Cannes in 2008 for his film Hunger. He has been a war artist in Afghanistan, shot films in South African goldmines and turned his eye on sexual addiction. The big surprise is not why this major retrospective has travelled from Chicago to Switzerland, but why it isn’t coming to the UK. Unmissable. Schaulager, Basel (schaulager.org), 16 March to 1 September.

Lowry and the Painting of Modern Life

People complain that LS Lowry isn’t given his due. Now big-gun art historians TJ Clark and Anne Wagner reappraise Lowry, showing him not so much as an eccentric loner but an artist who drew as much from 19th-century French art as he did from his daily grind as a rent collector. Much more than postcard cliche, Lowry was a social commentator and a painter of haunting land and seascapes, as well as of the mad and the miserable. Tate Britain, London SW1 (tate.org.uk), 25 June to 20 October.

The Mexican artist Orozco is known for many kinds of work: drawings on skulls and whale skeletons, moulded clay hearts, his photographic series and games with objects. But as well as a feel for materials, Orozco has an interest in geometry and structure, and this show thinks through his use of the circular motif. Fruitmarket Gallery, Edinburgh (fruitmarket.co.uk), 1 August to 20 October.