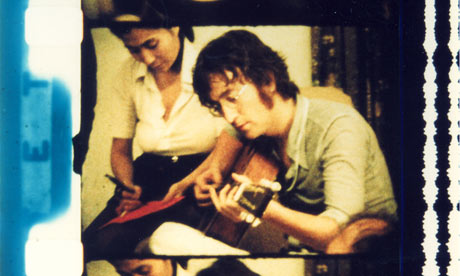 This article titled “The Jonas Mekas effect and Mariko Mori’s seasonal show – the week in art” was written by Jonathan Jones, for theguardian.com on Friday 7th December 2012 12.19 UTC

Exhibition of the week: Jonas Mekas

The film-maker Jonas Mekas has been a hero of the New York art scene since the 1960s. He is not just an underground film-maker but the organiser and orchestrator of an entire cultural movement of alternative cinema that transformed ways of making art 50 years ago and still resonates today. Mekas helped Andy Warhol to become a film-maker and provided a personal record of Warhol and other avant garde figures, as well as of New York, in his own film diaries. Back then it seemed a strange idea for artists to make deadpan visual records of real life. Today the radical idea of everyday cinema that Mekas pioneered is everywhere in art galleries. Here is an artist who has truly shaped our time.
• Serpentine Gallery, London W2 until 27 January 2013

Mariko Mori
Rituals of the New Year are given a fantastical kitsch twist by Japan’s art pop star in a proper seasonal show.
• Royal Academy, London W1S from 13 December until 17 February 2013

Jim Shaw
Shaw is a superbly imaginative graphic artist with a surreal take on life, and this is the first big British survey of his work.
• Baltic, Gateshead NE8 until 17 February

Matt Saunders
Prints made on light-sensitive paper and a film feature in this exhibit called Century Rolls.
• Tate Liverpool, Liverpool L3 until 20 January 2013

Still Life with Apples and a Pomegranate (1871-72) by Gustave Courbet
This painting is a crabbed, shadowy, gnarled thing that lodges in the mind and never leaves. Like an ugly memory, it haunts and troubles me. Courbet was being persecuted for his politics – he was a leader of the Paris Commune – when he painted this. It has his pain deeply encrusted into every apple skin.
• National Gallery, London WC2N

All about the real Oscar Niemeyer, after his death aged 104

And exactly how she feels about the Ebacc

How the Louvre is rejuvenating a French mining town

A Raphael drawing has fetched a record £29.7m at auction

Do you want a job as a gallery assistant?

There’s a new Share your art theme. Get sending your works now

Have you seen our Tumblr?