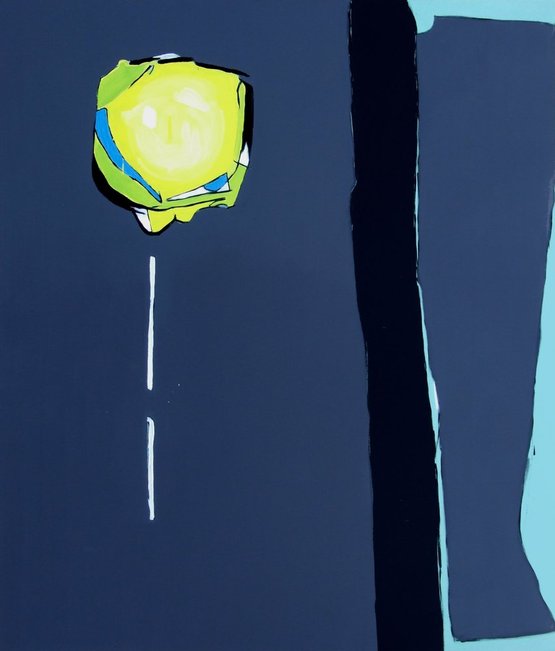 EB&Flow is to present a solo exhibition of new work by English painter
William Bradley.

Good Plan follows on from his solo exhibition two years ago, which has seen Bradley return to his native Yorkshire. Having viewed the idea of the pure abstract language as problematised by its lack of communication from artist to viewer, here Bradley continues to build in a more communal language of references or quotes taken from abstract art history.

Rather than pure abstraction, this series of large-scale canvases are antonyms of the abstract – each is a study or story telling device about abstract painting. Whereas historically abstraction availed itself as a movement of autonomy, which severed ties from strict representation or figuration, Bradley ostensibly turns this on its head – his paintings devise codes from a mark-making process that traditionally signified itself as one separate to ‘real world’ visual reference.

Whilst the work continues to look at the painted depiction of painted codes, the new series looks increasingly to the digital program Photoshop as a tool for the manipulation of these codes. Digitally modifying the scanned watercolours creates a new plan which moves yet another step away from the immediacy of the original authorial mark. The resultant painting may reference gestural marks or codes from the history of Abstraction (and painting more generally) but this is coloured by its digital pre-planning. Thus the gestural elements of the work are less about the intuitive use of paint and more a device concerned with the combining of source material and reference.

Although the work references the sort of painting known for its gestural immediacy and often action-led, Bradley’s is a carefully planned practice through a design process which incorporates drawing, photoshop, art theory, and delayed impulsion.

William Bradley graduated with a Masters degree from Wimbledon College of the University of the Arts London in 2008, selling out his end of year show. He has since been selected for FutureMap, the Catlin Art prize 2009 and 2011, the Marmite Painting Prize 2010, and Valeria Sykes Painting Prize 2011. His work is included in several international major collections.