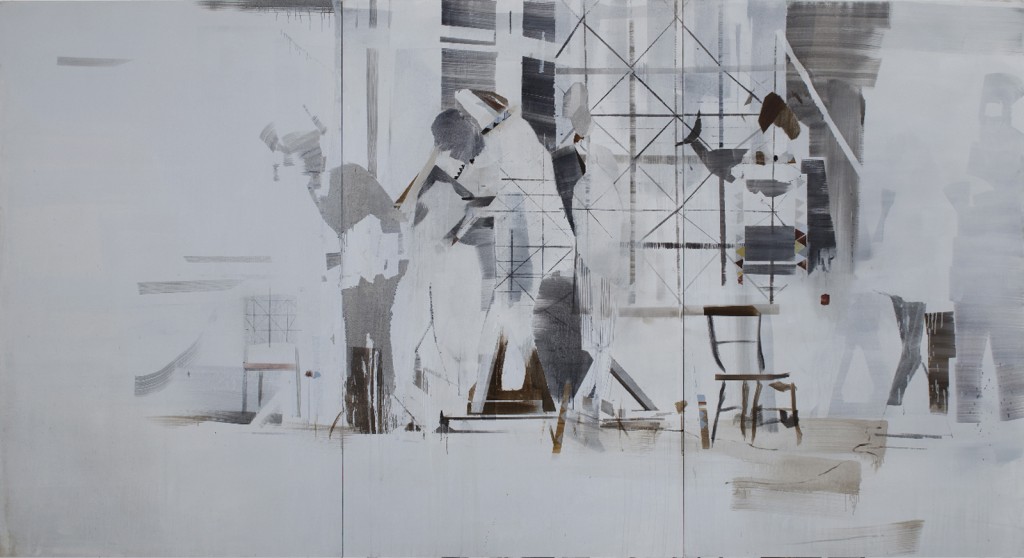 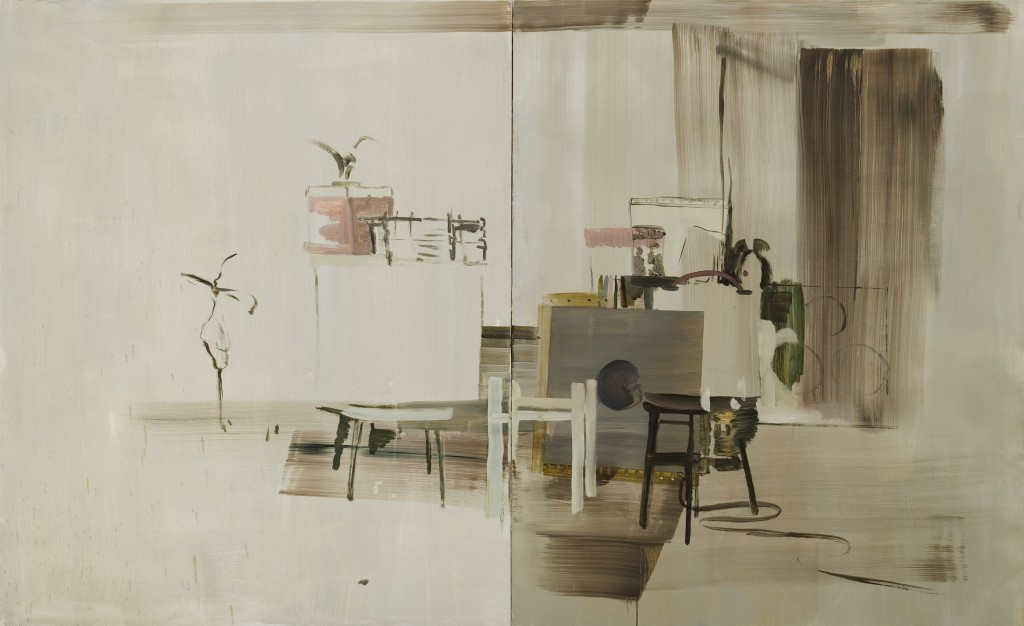 With his elusive, enigmatic style of painting, Goss is one of the most sought-after young British artists in the UK today. His work plays closely on the paradox of observation and memory, purposefully seeking out locations and subjects that co-exist between the landscape and the industrial, the recognisable and the ambiguous. The works include many historical allusions which demonstrate the capacity of painting to accommodate the historic alongside the contemporary, and to integrate the conceptual within the visual. Many of his images focus on the remains of a built environment that has become abandoned, overgrown or decayed.

Goss removes the sense of specificity from these spaces, embodying the works with beautiful timelessness and romanticism in his parallel world. But, they are real places with a haunting presence and fading memories. His works are bold yet fragile in their portrayals and it is this contradictory quality that intoxicates viewers.

The works in this exhibition concentrate on portrayals of two different kinds of space – rehearsal spaces and the artist’s studio. As well as being an artist, Goss plays in Indie band, My Sad Captains, and there can be no doubt that this informs his art as his music elicits very similar responses to those of his artwork. Casbah looks at how the actuality of being a musician is often so different to the imagined ideal. Goss seeks to investigate the detritus associated with the rehearsal spaces used when playing in a band. Cheap and simple, the limitations of these rooms allow creativity to flourish which promulgates the development of musical ideas. Yet, when devoid of players and instruments, these spaces have an uncharacteristic, melancholic atmosphere. Goss has developed the theme of the shabby rehearsal space in a study of fakery and idealisation, filled with a sense of nostalgia and an elusive sensibility.

Josh Lilley first encountered Goss’s work in 2009 at his studio at the Royal Academy and invited him to exhibit in the gallery’s inaugural show. Goss graduated that summer at which time Saatchi began investing in his works. Lilley had spotted something special and offered him a solo show for April 1st.

?
2010; they have worked together ever since. Without losing any of its potency, Goss’s work has matured. Still using the same reduced palette and depicting feelings of isolation, he now includes more obvious markers of the spaces in less diffused landscapes.

‘Nick is an astounding painter. Not only does he have that rare ability to make work that is both critically and commercially successful, but he conveys in his art a sense of time stopping. Nick’s subjects become not the posters on the wall, the drum kit on the floor or the maquettes he portrays but rather a realisation that you are the agent in activating the painting. An opportunity is provided to immerse yourself in a moment…one that can go on and on.’

Nick Goss
Nick Goss was born in 1981 in Bristol, UK and lives and works in London. He studied at the Slade, University College, London (2002-06) and the Royal Academy Schools, London (2006-09). He previously exhibited at Josh Lilley Gallery in the group show, Daily Miracles, in 2009 and in Veverka, his first solo exhibition, in 2010. Other recent presentations include: Needle in a Cloud at FOLD Gallery, London, in 2012; Friendship of the Peoples at Simon Oldfield Gallery, London, in 2011; Herz Man Sky at Simon Preston Gallery, New York, in 2011: The Armory Show in New York, in March 2010; NEWSPEAK: British Art Now at the Saatchi Gallery in 2010; and Saatchi New Sensations in October 2009.