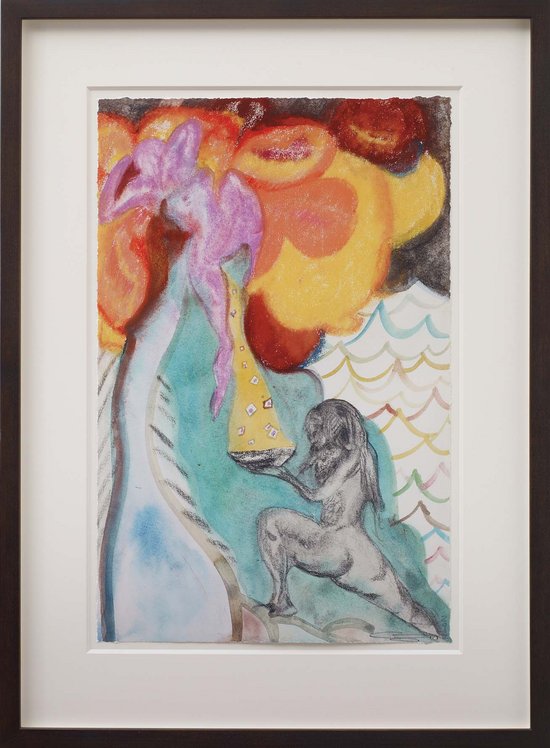 A new print and artist’s book by Chris Ofili is now available to coincide with his exhibition to take and to give at Victoria Miro.

Over the past two years Chris Ofili has worked on a substantial suite of paintings and works on paper inspired by Ovid’s Metamorphoses as part of Metamorphosis: Titian 2012, a unique collaboration between the National Gallery and The Royal Opera House. Working alongside choreographers and dancers from The Royal Ballet on sets and costumes for a new ballet Diana & Actaeon has been a revelation to the artist and has sparked a prodigious body of work. The exhibition to take and to give presents a new large scale painting, drawings and works on paper and continues until 21 December 2012.

Chris Ofili’s new limited edition print Study for Ovid-Windfall (2012) is taken from a watercolour, charcoal and pastel drawing for his large painting Ovid-Windfall (2011-2012) which was exhibited at the National Gallery earlier this year. As with all the works in this series, Study for Ovid-Windfall is inspired by Ovid’s epic poem Metamorphoses. The moonlit image depicts an ethereal male and female presence set in a mythical, watery landscape and is saturated with the intense, rich colours that surround the artist in his Trinidadian home. Ofili has described reading Ovid, as: “being infected by a world of magic, of shape-shifting, where anything was possible and all things were in flux. It was a world driven by sexual desire.”