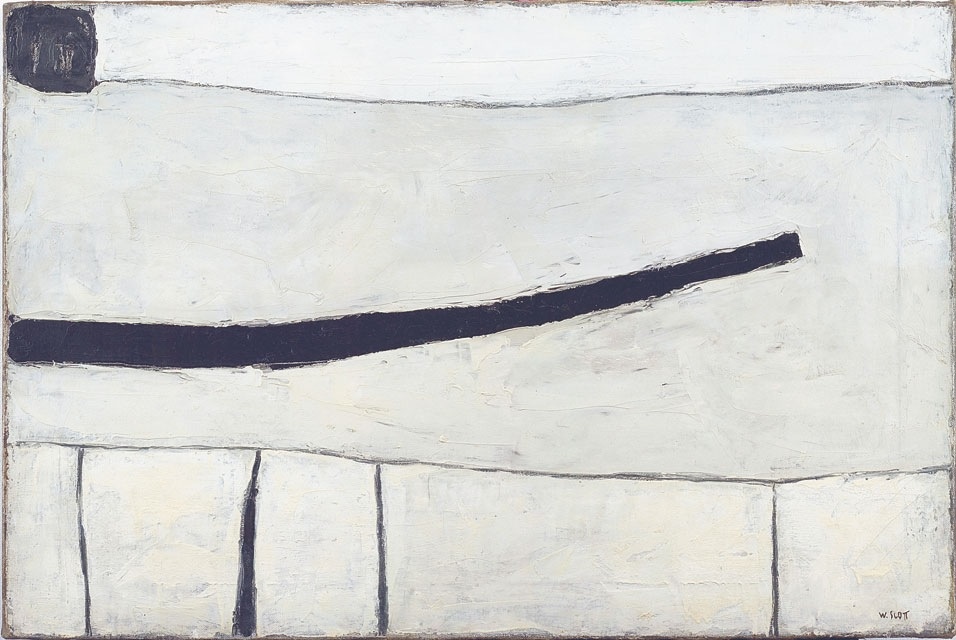 A major work by the leading British painter William Scott (1913-1989) has been pledged to Tate by the artist’s sons, Robert and James Scott, to mark the centenary of his birth in 2013.

The Harbour 1952 is one of the artist’s most radical works and was a treasured painting in his own collection. Valued at over £500,000, it is the first example of Scott’s seminal black and white works to enter the Tate Collection. The Harbour will be included in a centenary touring exhibition organised by Tate St Ives in association with The Hepworth Wakefield and Ulster Museum, Belfast.

The exhibition opens at Tate St Ives on 26th January 2013. This will be the first major exhibition of the artist’s work in the UK for over 20 years.

“The trustees are extremely grateful to William Scott’s sons for offering this significant gift to the Tate Collection on the occasion of the artist’s centenary. Though Tate has a work of 1953 (Orange, Black and White Composition) there is no example of Scott’s seminal black and white works in the collection. This gift will transform our ability to show the radical nature of his art in the early fifties.”

“We are delighted to present Harbour 1952 to the Tate to celebrate the centenary of our father’s birth. This seminal work, has over the past 50 years been exhibited worldwide in Brazil, Japan, USA as well as in Europe. It is only fitting that such an internationally known painting by William Scott now finds its home at the Tate. Here it will be available to young and old for generations to come and we are particularly pleased that it is to be included in the forthcoming touring centennial exhibition which starts at Tate St Ives. Cornwall was the very place in which Harbour and the paintings in this group of works were first conceived.”

Across a career spanning six decades, Scott produced an extraordinary body of work that has secured his reputation as one of the leading British painters of his generation. The Harbour was one of a group of paintings that marked a significant turning point in his career. Initially a figure and landscape painter in the fashionable neo-romantic mode of the late 1930s and 1940s, his work had become progressively tougher and more abstract. Until 1952, however, it had retained recognisable subject matter, most especially table-top still life arrangements and a number of landscapes. In their restrained palette and composition, works such as The Harbour, therefore, occupy an important position between the expressiveness of the materiality of paint in Scott’s works of the 1950s and the more abstract purity of form of later works. The title of this work positions it within a series of paintings of harbours that Scott had made since 1939. These can be seen as progressively simplified in their abstraction. The theme has led this work in particular to be linked to Scott’s association with the painters of St Ives in Cornwall. From 1946, Scott summered near St Ives and he was closely associated with such St Ives artists as Patrick Heron (1920–1999) and Peter Lanyon (1918 -1964).

Beginning at Tate St Ives with a series of thematic rooms (focusing on Scott’s morphological shifts between genres and his preoccupation with ‘significant forms’) the exhibition will evolve as it travels to Hepworth Wakefield, before expanding into a full survey exhibition at Ulster Museum, Belfast. The project is led by Sara Matson, Curator at Tate St Ives with Chris Stephens, Lead Curator of Modern British Art at Tate Britain, Frances Guy, Head of Exhibitions at Hepworth Wakefield and Anne Stewart, Curator of Fine Art at the Ulster Museum. In collaboration with the William Scott Foundation, the works will be drawn from major collections across the UK and Ireland.