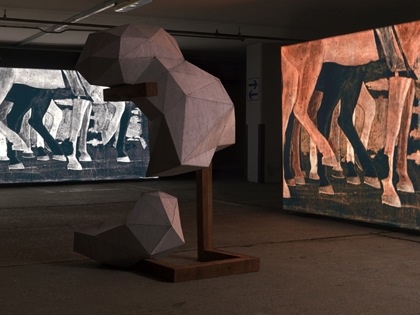 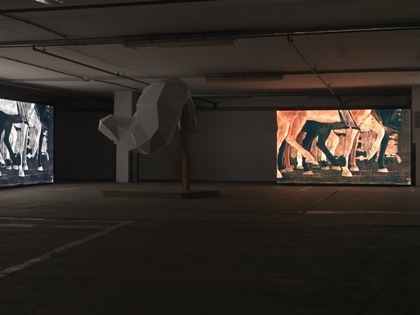 Finding inspiration from repeatedly reproduced images sourced from the Internet, Ziegler’s works renegotiate one’s relationship with the imagery that constantly inundates us. His paintings and sculptures trace an analogy between erosion and reinvention, fragmentation and the whole, confronting the idea of memory in an age of digital technology, as well as – what the artist considers – the creative process of looking.

For his exhibition The Cripples, a site-specific installation occurring fourteen storeys below ground in the basement level of Q-Park, Ziegler has once again turned to the Internet for readymade source material; and yet, unlike in the past, where Ziegler has transformed photographs of three-dimensional objects into sculptures, here, we find sculptures that have been imagined from a painting. Marking Ziegler’s attempt to interpret and make corporeal the five lumbering figures found in Bruegel the Elder’s eponymous painting The Cripples (1568), the five sculptures on view have been abstracted and imagined in 360 degrees. In addition, the figures have seen their missing limbs and canes replaced with timber frames. Acting at once as plinth and prosthesis, these frames snake through and around the sculptures, restricting them to their current location, while also suggesting the potential for motion.

Illuminating the sculptures are a series of eight light boxes, which are a new medium for Ziegler. These provide a panoramic view of a thicket of horses’ hooves which are reframed and reproduced in multiple configurations. The light boxes appropriate a small detail cropped from Piero della Francesca’s fresco The Battle of Milvian Bridge within the larger cycle of frescoes The Legend of the True Cross (c. 1466). Too dense to penetrate and creating a perspectival recession that is hard to enter, the hooves induce a sense of claustrophobia within the space.

Transported into this isolated, unsympathetic, utilitarian basement with no natural light and no sense of exit, Toby Ziegler’s The Cripples crystallises ones’ experience and perception of both space and artwork. Moving through and around the installation, viewers are encouraged to undergo a personal negotiation with the works.

Toby Ziegler (b. 1972) studied at Central St Martin’s College of Art and Design, and lives and works in London. Ziegler is included in major public and private collections internationally, and has had solo exhibitions in institutions in Europe such as the Zabludowicz Collection in both Sarvisalo (2012) and London (2010), The New Art Gallery Walsall (2011), Parkhaus im Malkastenpark in Düsseldorf (2008), and the Yorkshire Sculpture Park (2007). Ziegler has also participated in numerous international group exhibitions, such as at Stavanger Kunstmuseum MUST (2012), The State Hermitage Museum in St. Petersburg (2009), Turner Contemporary Project Space in Margate (2008), the Arsenale de Venezia (2007) and the Camden Arts Centre in London (2006). The travelling solo exhibition The Alienation of Objects is currently on view at the Museum of Contemporary Art Kiasma in Helsinki.