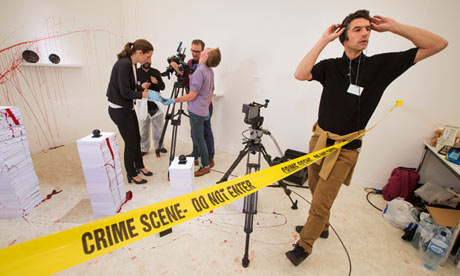 Murder In Three Acts by Asli Cavusoglu. Photograph: David Levene for the Guardian

This article titled “Frieze London 2012: the speed-dating approach to art fairs” was written by Adrian Searle, for The Guardian on Wednesday 10th October 2012 17.21 UTC

Reading on mobile? Click here to watch our video tour of Frieze

I bought a pint of milk at the farm shop at Frieze art fair. Big spender, me. I toyed with the rhubarb, and the spuds looked good, but it’s all a pain to carry when you’re cruising the commercial stands and the artists’ projects, diving into talks and watching the film programme. The milk actually comes from Tesco, but is being resold for a pound a pint in protest against the squeeze big retailers put on dairy farmers, many of whom are going out of business. Is the milk for sale, I ask at the shop, part of Spanish artist and farmer Fernando García-Dory‘s contribution to the Grizedale Arts Project, based in the Lake District. Grizedale are here as one of Frieze’s invited projects. “It is a shop,” the assistant tells me. “Like all other stands here.”

Lugging the milk around all day, up and down the aisles, from one gallery to the next, is a bore. I keep looking for something to pour it into, an urn or a vase, but these all seem to be on display over at Frieze Masters, the newly inaugurated and excellent fair of old and new art, on the other side of London’s Regent’s Park.

All art fairs are much the same. Frieze is a bit more fun, and better organised than most. But there is the same sense that, apart from schmoozing, a critic’s only role here is to witness the collisions of taste, and to stare appalled at things no serious adult ought to want to own (a pink baby seal, stranded on the floor of the Gagosian stand; a searing fluorescent pink floor, by Korean artist Koo Jeong-A; a life-like and very hairy naked humanoid mannequin at some gallery or other. A lot of the stands, let alone the art, quickly homogenise. Meanwhile, my milk has started to curdle.

I have no idea how collectors cope, but fairs provide a context they seem comfortable in. Most dealers sell more at fairs than they do in their galleries. This week it is Frieze London; next week they will all move to the big fair in Paris, FIAC. Finding a quiet moment to actually look at art is extremely difficult. Some galleries, like London’s MOT International, who are screening a film by Turner prize contender Elizabeth Price, do it with dignity – in a little cinema, away from the main drag. An entire show of work by Canadian artist Geoffrey Farmer fills Casey Kaplan‘s booth. Farmer was a hit at the recent Documenta exhibition in Kassel, with his field of cut-out images from the entire run of Life magazine; here, his works retreat in all the surrounding roar and razzmatazz. Setting out in search of some hot young star, I find myself looking at some funny, modest photographs of furry little guinea pigs, by Josephine Pryde, at Reena Spaulings’ stand. You ask yourself not why Pryde took them, but why you’re looking.

Often, it is the free panel discussions and talks, the commissioned artists’ projects and the film screenings that provide a bit of mental heft. Of the commissions, the filming of a murder mystery within the fair looks the most fun. Who did what and to whom, you ask, of Turkish artist Asli Çavu?o?lu’s Murder in Three Acts. I nearly tried to inveigle myself into being pelted with over-ripe tomatoes back at the Grizedale project, but ran away at the last moment. On Saturday I shall eat a vermin dinner there, with Japanese knotweed, Himalayan balsam and squirrel on the menu. Please note: I like my squirrel red.

The project that excites me most is by British artist Ed Fornieles, at Carlos/Ishikawa gallery. Fornieles has set up Characterdate, in which you can sign up and get a date at the fair. The trick is that you have to adopt a fake identity, which you have to make up and improvise when you create your profile. I am Reiner. I am German. I am powerful, rich and self-aware. I am a polymorphously perverse international jewel thief (well, I had to think of something). My date is in half an hour. Apparently, a “team of scenario prototyping experts” will begin expanding my new reality. If I’m lucky, my whole way of life might get tweaked, and I could begin to see things – even Frieze – with fresh eyes. Just call me Reiner.