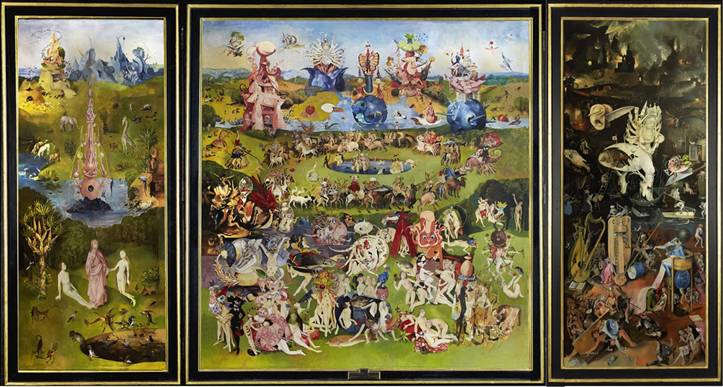 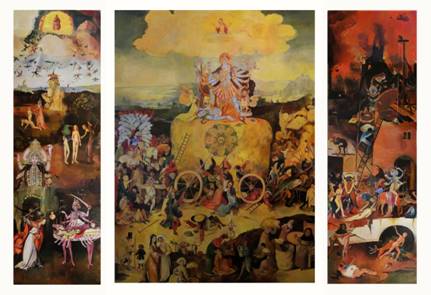 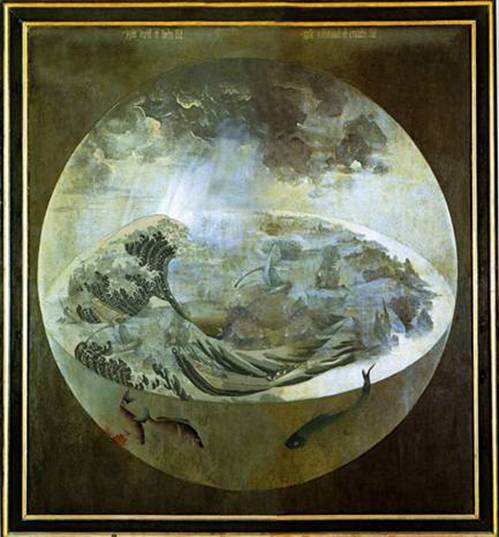 Wolfe von Lenkiewicz has transformed Bosch’s Garden of Earthly Delights into a post-historic, trans-cultural manuscript. At first glance von Lenkiewicz’s work appears to be a faithful reproduction of the original, but on closer inspection it is ‘contaminated’ with imagery from a wide range of historical and contemporary sources, both art historical and pop cultural. Diverse and contradictory images have been smuggled into the already dense and multilayered scene; from a screaming head by Bacon to clusters of brightly coloured Pokémon characters. They share the space of a painted universe but are unknowing of each other’s existence.

There is no fixed narrative, any symbolic resonances are coincidental and the selection of disparate imagery is rigorously arbitrary. The artist is playing with our expectations, like a conjurer, he leads us to believe there is some esoteric connection between the elements of the painting, but the true subject of the work is at once Bosch’s powerful and valuable art historical artefact, and more pertinently, the problem of the subject in art and the notion of originality and authorship.

It is important that this series of work is painted in oil paint, utilising the finest of pigments and the most refined of crystal clear poppy oil. This imparts a jewel-like clarity and preciousness mimicking the aspiration of the Northern school to depict every detail of ‘God’s’ universe in its infinite and microscopic glory. The medium is also ideal for rendering gems, the gold crowns of angels and the riches of the material world with which their patrons wished to associate themselves. The possession of the facsimile steeps the owner in the cloying aura of the actual.

The work in this exhibition would not function on a conceptual, philosophical and physical level if it were not rendered by the hand of the artist, over a long period of time, and with a most particular attention to detail and craftsmanship; the labour of the artist becomes part of the subject. There is an inherent seduction in the idea that the artist is ‘chained’ to the painting, a prisoner of the process; he is present in every brush mark on the canvas. What we are witnessing here is a conceptual strategy, one which appropriates the viewer’s expectations about what it is that an artist is, his or her relation to the rest of society, and how that changes the nature of their practice and positions them within a complex system of philosophical play and virtuoso display.

In Lenkiewicz’s painting of Bosch’s Creation of the World the original’s hybrid creatures and alchemical-like vessels have been replaced by Hokusai’s iconic print of a giant wave, his equally famous fish appear as leviathan creatures swimming under the ‘skin’ of the sea. The effect is to make the World resemble a snow shaker, implying that what we take for reality is no more than the plaything of God, just as the picture we are looking at is nothing more than another false world.

In Bosch’s The Haywain Triptych the left-hand panel represents The Garden of Eden, In von Lenkiewicz’s painterly Petri dish the Hindu Goddesses Kali has obscured the shameful Adam and Eve, fighting over them with the sword carrying cherub. Lenkiewicz manipulates these powerful cultural signifiers by deploying them as access points into the psyche of his audience. He transects the gap between what is actual, and what is infinitely possible within the realm of the imagination.
From the essay Another False World: Conjuring the Imaginary in the Work of Wolfe von Lenkiewicz by Richard Dyer 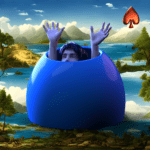